The Arboretum Wirty is a collective planting of various trees and bushes in the northern Polish Wirty (German Wirthy ) in the Pomeranian Voivodeship .

The forest-based arboretum encompasses a total of 33.61 hectares with over 700 different types of wood, most of which are available to the public for recreation and for the purposes of school and public education. There is also a scientific teaching, study and rearing center. One focus of the training is the teaching of ecological aspects. The tree garden emerged around 1875 from a royal forest ranger's office in the West Prussian forest district of Wirthy . Since 2005 the arboretum has also been run as a botanical garden .

The arboretum belongs to the Schulzenamt ( sołectwo ) Borzechowo (German Bordzichow ) in the northern Polish rural community Zblewo (German Hochstüblau ) in the powiat Starogardzki . It is located about 6 kilometers southeast of Zblewo, 14 kilometers southwest of Starogard Gdański (German Prussian Stargard ) and 56 kilometers south of Danzig . It is located in the western Vistula area on the Baltic ridge and forms the northeastern foothills of the Tucheler Heide , a typical Weichsel-glacial sand surface . In the south, the Bordzichower Lakes (today Jezioro Borzechowskie Wielkie ) border the plantations. 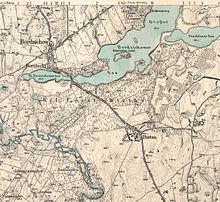 The Royal Forests Wirthy already existed in the early modern period and extended from the north over the Bordzichower Lakes to the south to the Schwarzwasser , a left tributary of the Vistula. The royal chief forester's office in the rather monotonous pine forest, which according to the West Prussian pastor and historian Bernhard Stadié also belonged to the Kaliska forestry establishment, was north of the lakes and north of Bordzichow. In the novella Die Abenteuer der Oijamitza , the writer Elisabeth Siewert, who was born on the nearby Budda estate, describes the pageant of a forest company .

Establishment of the arboretum in 1875 and plantings

To supply the forest settlements in East Prussia , a tree nursery was set up in the middle of the 19th century at the Wirthy forest district. In 1867 Adam Puttrich (often spelled Putrich ) took office as the royal chief forester , who planted the first exotic trees in the mid-1870s. In addition, he had the usable paths of the tree nursery provided with rows of fruit trees that are still standing today (as of 2013). Since the exact year of the first planting can no longer be determined, 1875 is taken as the year of birth of the arboretum.

In 1887 Puttrich initiated a close collaboration with the forest scientist Adam Schwappach . Schwappach was a privy councilor, professor at the University of Gießen and at the Eberswalde Forest Academy, as well as department head at the Prussian main station for forestry research, and at that time tried out the introduction of non-local, mainly North American trees on test areas in East Prussia . Following this example, Putrich and Schwappach also created thirty test areas in Wirthy. The first plantings were among sessile oak ( Quercus petraea , Syn. : Q. sessilis , Q. sessiliflora ) and red oak ( Quercus rubra ), the official state tree of the US state of New Jersey . Later there followed, among others, pitch pines ( Pinus rigida ), which are native to eastern North America, Douglas firs ( Pseudotsuga menziesii ) and giant trees of life ( Thuja plicata , Syn .: Thuja gigantea ), whose natural range is in western North America from Alaska (57 ° n. Br.) to Northern California (39 ° n. Br.) reaches.

Service tree in the arboretum, 1911

Scots pine in the arboretum, 1911. In the communications of the German Dendrological Society, referred to as a bulging pine .

In the forest botanical memorandum published by Hugo Conwentz , a first report on the arboretum with 22 pictures appeared in 1900. In the years 1904 to 1911, exact measurements and evaluations of the growth of the now thirty species were carried out. The experts came to the conclusion that most of these species were not suitable for larger cultivation in the region. The government and forestry councilor Herrmann from Danzig summarized the results in 1911 as follows:

“The attempts at cultivation in the Wirthyer Revier with the Austrian pine , Pinus Laricio austriciaca, of which a cuddly shrub has remained here and there, and those with Pinus Jeffreyi and Pinus ponderosa , of which nothing is reminiscent, have totally failed . […] If you finally look over the results again […], we have come to a final judgment only about Pinus rigida ; she did not meet the expectations placed in her. On the other hand, Pinus Banksiana has proven itself as a pioneer , for the first cultivation of wasteland soils and as a stopgap in thinned pine cultures [...]. The Picea species seem to be out of the question for our, after all, drier pine area and the unfavorable, harsh climate of West Prussia. Of the fir trees , only Abies concolor appears worthy of further attempts on a large scale. The Douglas fir in the green form has so far done at least quantitatively good under favorable location conditions […]; further attempts seem justified. For the Japanese larch , as for its European sister, only a few locations in the West Prussian lowlands will come into question. The cupressinees are only suitable for cultivation in the most protected locations and on the best and freshest soils for small areas and more for aesthetic reasons than for silvicultural reasons. - Quercus rubra seems to tolerate our rough climate well. "

- Government and Forestry Councilor Herrmann: Behavior and prosperity of foreign woody plants in West Prussia with special consideration of the trial areas in the Wirthy forestry department. 1911.

The determining factors for the cultivation were, or are, on the one hand, the loamy-sandy, diluvial soils of the flat to shallow undulating area and, on the other hand, its specific climatic conditions in the transition area between mild maritime and continental climates . Sometimes very long, severe winters characterize the rather dry area, which is 100 to 102 meters above sea level. However, the low average rainfall of 600 mm / year is somewhat offset by the moisture supply from the neighboring Borzichow Lakes. The average annual mean temperature is 6.7 ° C , the vegetation period is around 200 days a year.

In August 1911, the German Dendrological Society held its annual meeting in Danzig and visited the arboretum. During the tour of the site, the meanwhile acting chief forester Marter underlined the good growth of the Douglas fir nests and regretted that there were only sad remains of the hickory species , the trumpet tree , the tulip tree (official state tree of the US states of Kentucky , Indiana and Tennessee ) and the Zelkowa be. The royal garden inspector and managing director of the company Ludwig Beissner wrote in the company's communications:

“We now reach Bordzichow, where lunch is taken in the village inn, and then the tour of the extremely interesting forest stands continues with foreigners. In any case, they offer the most interesting and instructive things we have seen in this field so far. We see magnificently developed exotic species in the forest garden and plant garden, […]. The coffee was consumed on a plateau in the forest, in front of which the large Bordzichower Lake spreads out with a forest border, a wonderfully beautiful landscape picture [...]. "

Standstill until and revival after 1950

In the period of and between the two world wars , the development of the arboretum was probably largely at a standstill, at least little information is known from this time. Measurements were only carried out very occasionally and maintenance measures were reduced. It was not until the 1950s, now under Polish administration, that new plants were planted and recordings were made that showed a population of 90 deciduous and 140 conifer species . The forest manager Kazimierz Szulisławski created a new path with exotic trees and the following head of the Wirty Forestry Commission, Józef Pozorski, created an alpine rock garden by the pond of the arboretum. In 1974/75, the work of Puttrich and Schwappach was followed up with the formation of new experimental Douglas areas. In 1984 the arboretum began working with the Institute of Dendrology ( Instytut Dendrologii w Kórniku ) of the Polish Academy of Sciences in Kórnik . The collaboration led to the establishment of new test areas, in particular with the planting of Pseudotsuga menziesii , Pinus ponderosa , Abies procera , East Asian Larix gmelinii and North American trees and shrubs such as Pinus strobus , Abies grandis , Tsuga canadensis , Pinus jeffreyi , Picea rubens , Pinus rigida and Picea mariana .

In 1986 the arboretum was opened to visitors. In 2005 the arboretum also received the status of a botanical garden and in 2006 it started working with the Agricultural Academy in Szczecin . In the same year a new porter's lodge was built next to the main entrance. The paths were leveled and paved and a new 2340 meter long fence was put in place.

Of the original thirty trial areas, twelve have been preserved to this day. The arboretum gathers over 700 different tree and shrub species on an area of ​​33.61 hectares . As a special feature, the arboretum is the only facility in Poland to offer a specimen of Juglans × intermedia Carr. ( Black walnut hybrid ). With the greenhouse built in 1990 , a seed bank and a teaching building opened in 2006, the Arboretum Wirty is now a modern scientific research, rearing and training center that focuses on teaching ecological aspects. In 2011 the fourth International Conference of Botanical Gardens from the Baltic Sea Region took place in the Arboretum. A 2.5 km long nature trail with information boards conveys the history of the complex and the special features of the plantations. Around 15,000 children and young people get to know the forest every year under the guidance of foresters. The facility also serves as a recreation area with walking and hiking trails as well as viewing points.