Betziesdorf is a district of Kirchhain in the Marburg-Biedenkopf district in Central Hesse .

Finds of Carolingian ceramics, around 700, are found in the area around today's town . On December 13, 1254, the place was first clearly mentioned in a document as Bezchindorph when the Haina monastery acquired properties here. The Marienstift Wetzlar and the German Order were wealthy in the place. In 1366, Betziesdorf was first mentioned as the seat of a parish.

On February 1, 1971, the previously independent municipality of Betziesdorf was incorporated into the town of Kirchhain as part of the regional reform in Hesse .

The district has had a partnership with Plomelin in Brittany ( France ) since 1966 , with the official town twinning with the incorporation of Betziesdorf being transferred to the town of Kirchhain.

Towards the end of the 17th century there were a number of witch trials against women from Betziesdorf , which gave the village a notoriety. The best known were the trials against Katharina Lips in 1671 and 1673 and against her 17-year-old granddaughter Ännchen Schnabel in 1673. Katharina Lips, the schoolmaster's wife, could not be broken even by the most terrible torture and was ultimately released, but from the Landgraviate of Hessen-Kassel banished. Her granddaughter, on the other hand, could not survive the torture and was executed by the sword in Marburg on May 18, 1674 . The last of the Betziesdorf witch trials began in 1682 against Anna Katharina Wolff, also the wife of the village school teacher, and ended on May 16, 1685 with her expulsion from Hessen-Kassel.

The following list gives an overview of the territories in which Betziesdorf was located and the administrative units to which it was subordinate:

With an edict of June 29, 1821, administration and justice were separated in Kurhessen. Now judicial offices were responsible for the first instance jurisdiction, the administration was taken over by the districts. The Kirchhain district was responsible for the administration and the Marburg district court was the court of first instance for Betziesdorf. The Supreme Court was the Higher Appeal Court in Kassel . The higher court of Marburg was subordinate to the province of Upper Hesse. It was the second instance for the judicial offices.

After the annexation of Kurhessen by Prussia, the Marburg district court became the royal Prussian district court of Marburg in 1867 . In June 1867, a royal ordinance was issued that reorganized the court system in the areas that belonged to the former Electorate of Hesse. The previous judicial authorities were to be repealed and replaced by local courts in the first, district courts in the second and an appeal court in the third instance. In the course of this, on September 1, 1867, the previous regional court was renamed the Marburg District Court. The courts of the higher authorities were the Marburg District Court and the Kassel Court of Appeal .

Even with the entry into force of the Courts Constitution Act of 1879, the district court remained under his name. In the Federal Republic of Germany, the superordinate instances are the Marburg Regional Court , the Frankfurt am Main Higher Regional Court and the Federal Court of Justice as the last instance.

Occupied population figures up to 1967 are: 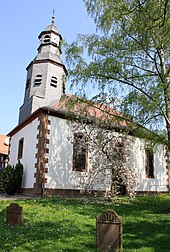 In the village there is a late Baroque parish church that was built in 1789. The previous building was consecrated in 1216 and rebuilt in 1516. The church is surrounded by a polygonal wall, which was built in the 15th and 16th centuries. Century had been expanded to a fortification. The portal of the old church, built in 1516, was moved into the defensive wall.

The soccer team of TSV Germania Betziesdorf plays in the district league B Marburg .