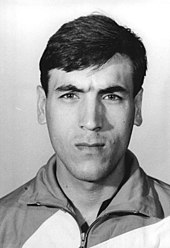 Abduschaparow was successful in the Soviet national team in the 1980s and won, among other things, six stages of the International Peace Drive, where he delivered many duels in the final sprint with Olaf Ludwig . He started the peace run three times and in 1987 he had his best result with fourth place overall. In 1988 he won the special ranking for the white jersey of the best sprinter. He was able to wear the leader's yellow jersey twice. He took part in the road race of the 1988 Summer Olympics, finished second in the sprint of the chasing group and thus fifth in the race. In the course of the dissolution of the Soviet Union , he became a professional athlete in 1990 .

In 1991 Abduschaparow achieved his first two of a total of nine Tour de France stage wins. He also won the this year for the first time green jersey of the winner of the points classification , He won the points classification in the years 1993 and 1994 . Twice, in 1993 and 1995 , Abduschaparov won the prestigious final stage on Paris' avenue des Champs-Élysées . He was also able to win stages in the other two major national tours: seven stages in the Vuelta a España , one in the Giro d'Italia . Due to his sprint strength, Abduschaparow also won the points classification of the Vuelta a España 1992 and the Maglia ciclamino of the Giro d'Italia 1994 . His greatest success in one-day races was the sprint victory in the classic Gent – ​​Wevelgem in 1991 .

Abduschaparov was known for his extremely restless and sometimes dangerous, long-swinging style of sprinting close to the limit of the regulations, which earned him the nickname Terror of Tashkent . At the Tour de France in 1991 , his style in the mass sprint in Paris was his undoing: As the leader, he came too far to the right without being disturbed by an opponent and hooked up in the gang, whereupon he fell spectacularly into an advertising figure shortly before the finish line affected some competitors. He then had to carry the bike across the finish line with a broken collarbone to win the green jersey.

During the Tour de France 1997 Abduschaparow was convicted of doping abuse with clenbuterol and bromantane . After being suspended for a year, he ended his career.

Soviet champion in the road race

The championship was held until 1991.