Peter Sagan (Slovak pronunciation: [ˈpeter ˈsagan], born  January 26, 1990 in Žilina ) is a Slovak cyclist . He won the road world championships in 2015 , 2016 and 2017 , making him the first cyclist to win this title three times in a row. Sagan also won the classics Paris – Roubaix , Gent – ​​Wevelgem and the Tour of Flanders and is a seven-time winner of the points classification of the Tour de France .

As a junior rider , Peter Sagan was successful in both cyclocross and mountain bike cross country and on the road . Among his most significant successes in cyclocross was the Slovak championship title in 2007, the bronze medal at the 2007 European championships and silver at the 2008 world championships. After bronze at the 2007 European mountain bike championships in Cappadocia , he became world and European cross country champions in 2008. On the road, he won the Slovak championship in 2007 as well as one stage each at the international 3-stage tour in Frankfurt and at the Trofeo Karlsberg . In 2008 he won the Croatian Tour Kroz Istru. In the men's area, Sagan focused on the road and started in the 2009 season for the Slovak cycling team Dukla Trenčín Merida

For the 2010 season Sagan moved to the UCI ProTeam Liquigas . In his first ProTour - stage race , the Tour Down Under in 2010 , he finished third and fourth stage space. At Paris – Nice 2010 he was able to confirm these initial successes and, in addition to the points classification, won two stages and thus his first two ProTour races.

In the further course of 2010 and the following years, he won numerous one-day races and stages - mostly in the sprint . His outstanding results in 2011 included the overall victory at the Tour of Poland and his three stage wins at the Vuelta a España . In 2012, he won the Tour de France green jersey in three stages . In 2013 he was able to successfully defend the points classification of the Tour de France 2013 and won a day. With Gent – ​​Wevelgem he won a classic for the first time in 2013 . In the same season he took second place in the cycling monuments Milan – Sanremo and Tour of Flanders .

In 2014 and 2015 he was initially unable to fully meet the expectations, especially of the Tinkoff Saxo team , which he joined in 2015. Although he won the green jersey at the Tour de France in 2014 and 2015 , he never won any stage despite some spectacular attacks.

End of season 2015 Sagan was in the American Richmond after an attack of the day on the penultimate climb with three seconds ahead of a small group of road champion and achieved by its largest ever career success.

In March 2016, Sagan won Gent – ​​Wevelgem for the second time; After Rik Van Looy in 1962, he was the second racing driver to win this race in the rainbow jersey of the world champion. A week later he won the 100th edition of the Tour of Flanders after a solo trip of 13 kilometers, his first monument of cycling ; thus he was also the first Slovakian to win this race. At the 2016 Tour de France , he won three stages and the green jersey for the fifth time in a row. At the following Olympic Games he took part in the mountain bike race, in which he finished 35th after a defect. In the fall of the won the World Tour -race Grand Prix Cycliste de Québec , has been road European champion and in Doha for the second consecutive road world champion . Based on the results of 2016, Sagan was also able to win the individual classification of the UCI WorldTour 2016 .

For the 2017 season, Sagan switched to the German team Bora-hansgrohe , which this year had received a license as a UCI WorldTeam for the first time . At the classic Milan – Sanremo he was only beaten by Michał Kwiatkowski in the sprint of a three-man breakaway group .

He won the third stage of the Tour de France 2017 in the uphill sprint of the front field. After the fourth stage , Sagan was disqualified by a UCI jury because he had pushed his opponent from the Dimension Data team , Mark Cavendish , into the barrier during the final sprint, which he finished second, while exposing his elbow and he fell and himself in the process the shoulder blade broke. This was interpreted by the jury as willful assault by Sagan. The decision was controversial, as it was not clear whether Sagan's elbow check was the cause of Cavendish's fall, or whether Cavendish's elbow had touched at all; a protest by his team was unsuccessful.

After a hearing at the Union Cycliste Internationale (UCI) in Lausanne in December 2017, it was decided that the verdict of the Tour jury should have been a wrong judgment. As the interim president of the UCI, David Lappartient , announced, in order to avoid such misjudgments as Vittel's, the UCI will have a “Support Commissaire” with special expertise in video analysis to support the jury at the most important UCIs from the coming season Use the World Tour race. Sagan commented on this announcement: He is looking to the future, but it is "nice" to see that there are positive developments.

In September 2017, Sagan won the Grand Prix Cycliste de Québec , celebrating the 100th victory of his career. At the 2017 World Championship in Norway, he was the first driver to win the road race title for the third time in a row in the sprint decision of the 28-strong front field. 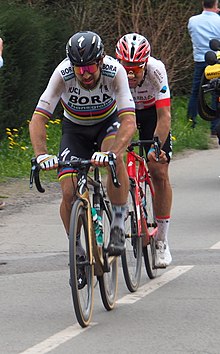 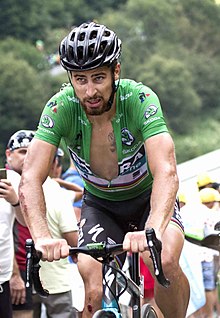 Sagan in the green jersey at the Tour de France 2018

In the spring classics 2018, Sagan finished sixth at Milan – Sanremo and the Tour of Flanders. He won Gent-Wevelgem in the sprint of the front field and Paris-Roubaix after he had taken up the chase of a breakaway group alone 54 kilometers from the finish, the last driver of which, Silvan Dillier , he beat in the final sprint at the Vélodrome in Roubaix . In June 2018 Sagan won a stage in the points classification of the Tour de Suisse 2018. At the end of June he won the title of Slovak road champion for the sixth time. At the Tour de France 2018 , Sagan won the second stage in the sprint and then wore the yellow jersey for one day . He also won the fifth and 13th stages in the sprint. Sagan finished the tour despite a bad fall on the 17th stage with his sixth success in the points classification and thus equalized Erik Zabel's record .

Sagan started the 2019 season with a stage win in the Tour Down Under . Subsequently, despite the consequences of a gastrointestinal infection, fourth at Milan-Sanremo and fifth at Paris-Roubaix . After stage victories in the Tour of California and the Tour de Suisse, he won the fifth stage of the Tour de France 2019 and set a new record with his seventh success in the points classification.

Peter Sagan is the younger brother of Juraj , who is also active as a cyclist.

Legend: DNF: did not finish , abandoned or withdrawn from the race due to timeout. DSQ: disqualification.

Most combative driver of the Tour de France

(The award was not given in years not listed)

The results are not complete.