Großkochberg is a district of the municipality of Uhlstädt-Kirchhasel in the Thuringian district of Saalfeld-Rudolstadt . 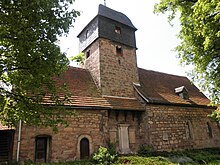 The village of Großkochberg was first mentioned in a document on February 21, 1125. The districts of Clöswitz and Kleinkochberg were first mentioned in writing in 1378. The Großkochberg moated castle is located in the upper part of the Haselbach valley. A gentry family named itself after the moated castle built here . The castle sold this to Messrs . Berlepsch . In 1577 the gentlemen von Schönfeld became owners. They built the castle as it is today. In 1733, the Imperial Councilor Baron Friedrich Ludwig Christian von Stein acquired the manor and the larger surrounding lands. Later owner was the ducal stable master Baron Gottlob Ernst Josias Friedrich von Stein (1735–1793), who had lived with Baroness Charlotte Albertine Ernestine von Stein , nee since 1764 . von Schardt, was married.

Großkochberg became known through frequent visits by Goethe , who probably stayed there for the first time on December 6, 1775 at the age of 26, because the Weimar Duke Karl August spent a few days in nearby Rudolstadt . Goethe left an engraving with the date on the desk of his confidante and lover Charlotte von Stein. The inscription can still be seen in Großkochberg today. In his life, Goethe wrote about 1700 letters to Frau von Stein, which shows the close relationship between the two. The Großkochberg estate is about 28 kilometers away from Weimar, a route that Goethe said he took about four hours to walk. Goethe came to Großkochberg for the last time on the first weekend in September 1788, when his relationship with Frau von Stein was already broken. She is said to have received him “without a heart”: “That upset him all day”. Even Friedrich Schiller came in the summer of 1788 after Großkochberg.

In 1775 or 1780, Goethe, disguised as a farmer, is said to have welcomed his Duke, who was passing through, in Großkochberg, and read and presented him with a “government manual” in Knittelversen.

Carl von Stein, Charlotte von Stein's eldest son, became the heir of the manor and set up a “Musenhof” based on the Weimar model. Around 1800 a private theater for lovers with a classicist facade was inaugurated at the entrance to the palace gardens. Carl von Stein had the two-storey baroque garden house originally located at the entrance to the park converted. From 2009 to 2011 the Klassik Stiftung Weimar extensively renovated the building. Since then there have been regular events in the theater again.

The Michael church was remodeled in the 15th century late Gothic. The late Romanesque choir tower dates from around 1200.

Until 1920, the place was an enclave belonging to the Saalfeld district of the Duchy of Saxony-Meiningen .

Since December 1, 2007, the formerly politically independent municipality has been part of the municipality of Uhlstädt-Kirchhasel .

Before the incorporation, the municipality of Uhlstädt-Kirchhasel was already a fulfilling municipality for Großkochberg.

The last councilor of Großkochberg consisted of eight councilors.

The last honorary mayor before the incorporation was Jürgen Ryll. He was elected on June 27, 2004.