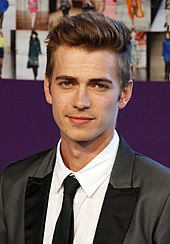 Hayden Christensen (born April 19, 1981 in Vancouver , British Columbia ) is a Canadian - American actor . He became internationally known for his participation in the Star Wars episodes II and III , in which he embodied the character Anakin Skywalker .

Born in Vancouver in the Canadian province of British Columbia, his family later moved with him to Markham near Toronto . There he grew up and spent his childhood. His Canadian father David Christensen is of Danish descent, his American mother Alie Nelson Christensen of Swedish and Italian descent. Christensen has a brother, Tove, and two sisters, Hejsa and Kaylen. Christensen has dual citizenship from Canada and the United States through his two parents.

He attended Baythorn Public School for his basic education and then Unionville High School in Markham . He was a tennis ball boy and was once the victim of an outburst from John McEnroe , who shot him during a game.

Hayden was spotted for the film when his older sister Hejsa, a former trampoline champion, was looking for an agent after receiving a role in a commercial for the stackable chip brand Pringles .

Christensen with Rachel Bilson in Rome while filming Jumper (2006)

Christensen's career began in 1993 with the German-Canadian television series Power of Passion , in which he a. a. acted alongside Dietmar Schönherr and Tina Ruland . In addition, he was initially seen sporadically in Canadian television programs, in the late 1990s he also got roles for American television, including a. he was seen in the TV series Goosebumps , which is based on the children's book series Goosebumps . There he played the 12-year-old boy Zane in the two-part episode The Night of the Living Dummy III (Night of the Living Dummy III) .

Christensen received first recognition for the lead role in the FOX television series Higher Ground (2000). In this series, he demonstrated his acting skills by portraying a teenage boy who is sexually abused by his stepmother and who turns to drugs in desperation.

For his critically acclaimed portrayal of a misunderstood teenager in Das Haus am Meer (2001), Christensen received nominations for the Golden Globe Award and for the Screen Actors Guild Award, as well as the National Board of Review award for Best Newcomer of the Year . However, this role did not receive much public recognition.

Christensen only became a star in the role of Anakin Skywalker (previously played by Sebastian Shaw and Jake Lloyd ) in Star Wars: Episode II - Attack of the Clones (2002). At the time, he prevailed against 400 competitors, including Jonathan Jackson and Leonardo DiCaprio . Although his performance earned him quite different reviews and he received the Golden Raspberry twice , he was very present in youth magazines and gained more prestige as the front runner of unofficial ranks such as hottest boy or sexiest actor and thus quickly became the new teen star. Christensen also got good feedback for the film Shattered Glass (2003), which, based on a true story, tells the story of Stephen Glass who, as a prominent feature journalist and member of the editorial team of The New Republic, forged several articles.

Christensen received mostly positive reviews for the third part of the Star Wars saga, Revenge of the Sith (2005), in which he plays a more mature, yet insecure Anakin who gradually overflows to the dark side of power and finally from the scheming and corrupt Chancellor Palpatine is transformed into Darth Vader . In the 2004 Special Edition of Star Wars: Episode VI - Return of the Jedi , Christensen replaces original actor Sebastian Shaw in the role of the power spirit of Anakin Skywalker in a short scene at the end of the film.

In 2008 he starred opposite Rachel Bilson in the movie Jumper . Four further cinema productions followed up to and including 2010, after which he did not appear again as an actor until 2014. He took on roles in American Heist and Outcast , followed by 90 Minutes in Heave n from 2015. Two years later, he starred alongside Bruce Willis in First Kill . In 2018 he was featured in A Recipe for Love and The Last Man .

In 2007 Christensen bought a farm near Uxbridge , Ontario . In 2008 he stated that he would renovate these himself and learn how to keep animals , arable farming and agricultural technology . In November 2013, Christensen launched a farm-inspired men's clothing line in collaboration with Canadian fashion chain RW & Co.

From December 2008 to mid-2010 he was engaged to actress Rachel Bilson . In August 2010, they announced their split. After they found each other again in November 2010, their first child, a girl, was born at the end of October 2014. In September 2017, the two then announced their final separation. Christensen lives in Los Feliz , a suburb of Los Angeles .