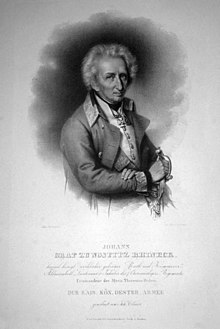 Count Johann Nepomuk von Nostitz-Rieneck (born March 24, 1768 in Prague , † October 22, 1840 there ) was an Imperial Austrian Lieutenant Field Marshal during the coalition wars . He came from the Bohemian line of the House of Nostitz .

His ancestors came from an old Lausitz family who immigrated to Bohemia with a branch in the 16th century. The imperial field marshal Friedrich Moritz von Nostitz (1728–1796) was a knight of the golden fleece , president of the Imperial and Royal Court War Council and since 1767 owner of the Dragoon Regiment No. 2 " Grand Duke Leovold of Tuscany ". His younger brother Anton Josef Franz Graf von Nostitz-Rieneck (1725–1794) was Colonel Burgrave of the Kingdom of Bohemia , from his marriage to Elisabeth Kolowrat-Krakowski (1728–1815), daughter of Count Wilhelm Albert Kolowrat-Krakowsky (1678–1738 ) came from Johann Nepomuk.

Johann Nepomuk von Nostitz received his first education from the scholars Pelzel, Schaller and Dobrowski. From 1784 he attended the military academy in Wiener Neustadt . In 1785 he joined the light dragoon regiment "Grand Duke Leopold of Tuscany" No. 3 as a cadet , the second owner of which was his uncle Friedrich Moritz. In this regiment he became 1786 lieutenant and in 1787 Lieutenant , on 21 September 1788, he distinguished himself in the retreat from Lugo to Karansebes first time from. In 1789 he took part in the siege of Belgrade under Laudon and was promoted to Rittmeister.

On February 12, 1793 he rose to major , his cavalry fought in the First Coalition War in the Netherlands under FZM Latour . On May 18, 1794, he was wounded during the Battle of Tourcoing in the battle for Lincelles. On June 13th he stood in front of Hooglede and on July 27th he stood out again in front of Liège . On September 24, 1795 he repulsed Pichegru's cavalry attack on Handschuhsheim . On 21 October 1795 he was in his Dragoons to lieutenant colonel and on 1 April 1796 to Colonel promoted. He was able to repel a French attack off Mannheim on June 14 in the association of the cavalry of FML Count Sztaray near Maudach . After the battle of Emmendingen on October 19, the French retreated against Strasbourg and Hüningen . On August 11, 1796, Nostitz was wounded several times in a battle near Eglingen , and later in September and October 1796 in other battles. When his uncle Friedrich Moritz died at the end of December 1796, Johann Nepomuk inherited the lords of Türmitz and Czernosek.

In the campaign of 1800 he served in the Bohemian Legion as the commander of a cavalry brigade in Prague and was promoted to major general on November 15, 1800 , and on January 27, 1801, he was granted a patent to raise his rank. In the campaign of 1805 his cavalry supported the operations under FML von Kienmayer in the Danube Valley, in August Nostitz led his cavalry brigade near Wels . On September 8, he led the avant-garde of the Klenau corps at Braunau crossing the Inn. After the retreat, his cavalry went back over the Enns on November 2nd and united with the troops of FML Graf Merveldt near Steyr . On October 25, the French stood near Passau and forced the Enns crossing on November 4, 1805. At Ebersberg the union with the allied Russian troops was accomplished, Nostitz covered with his cavalry the rearguard of the general Kutuzov . Nostitz fought together with the Russians on November 11 near Dürnstein , where he successfully attacked a guard division of Marshal Mortier . On November 15, 1805, the Nostitz cavalry brigade fought under Prince Bagration in a battle near Schöngrabern , where Murat's cavalry escaped being surrounded. In and after the battle of Austerlitz he commanded the cavalry in Kienmayer's corps, as leader of the rearguard he broke into Davout's columns and took 300 prisoners into custody. Nostitz's poor health urgently needed recovery, he was given leave for a long time.

On December 28, 1808 he reported back to service and at the beginning of the campaign of 1809 took over the Reserve Division of the 1st Corps under Count Bellegarde . On May 18, 1809 he was promoted to lieutenant field marshal . Under Archduke Karl he commanded the Cavalry Reserve Division of the 2nd Attack Column, which was at the center of the Battle of Aspern . He lost two horses in the battle. On July 5th and 6th, Count Nostitz took part in the Battle of Wagram with 4 cavalry regiments to support the IV Army Corps on the left wing behind the heights of Markgraf-Neusiedl . Nostitz led his division in the Cavalry Reserve Corps under General of the Cavalry Prince Liechtenstein. When the French advanced menacingly between Esslingen and Enzersdorf, the avant-garde of the IV Army Corps withdrew to the left wing under the protection of the Cavalry Reserve Division. Nostitz was wounded again, after which he was unable to work until 1813.

In the campaign of 1813, the Austrian army gathered on the north-western border of Bohemia. Count Nostitz, who was back in service, stood with his cavalry on the right wing and accompanied the bulk of the army via Marienberg and Reichenberg to Dresden . In the Battle of the Nations near Leipzig , Count Nostitz commanded the 36 squadrons of the cuirassier corps under Prince von Schwarzenberg . On October 16, 1813, he fought at Liebertwolkwitz on the left wing of the main army . On the southern battlefield near Wachau, after the withdrawal of Wittgenstein's troops with the cuirassier regiments "Albert" and "Lothringen", he advanced and threw back a large part of the guard infantry of Marshals Mortier and Oudinot . On October 18, Nostitz was wounded twice in the eventful fighting. On October 20, 1813, he received the Maria Theresa Order for his services at Leipzig .

In the 1814 campaign, the allied reserve troops of Austria, Russia and Prussia were united under the supreme command of Grand Duke Konstantin Romanov. Count Nostitz led 40 squadrons and left the camp in Württemberg in mid-December . The advance of the superordinate fifth main column under the Hereditary Prince of Hesse-Homburg took place through Switzerland via Schaffhausen to Neufchatel, on January 9, 1814, it stood before Besançon . On January 19, the cavalry corps under Nostitz reached Dijon , assigned to the supreme command of the FZM Graf Colloredo (1st Corps and 2nd Light Division), and a connection to the main army was sought via Chatillon . Count Nostitz fought in March as commander of the Cuirassier Corps with the IV Army Corps near Troyes , at Premierfait there was a battle. In the battle of Arcis-sur-Aube and at Fère-Champenoise , Nostitz proved himself to his cuirassiers. At Arcis, the cuirassiers and grenadiers, as reserves, had not really entered the battle. On March 23, Nostitz pursued the French with his cavalry as far as Vitry . After the agreement concluded in Paris on August 3, 1814, Nostitz moved his troops to Chalons-sur-Saone as a garrison . FML Count Nostitz was given interim command of the entire reserve corps in France on August 17th. At the beginning of October 1814 a large part of the Austrian army was concentrated near Dijon, the army assembled there numbered around 100,000 men and had 264 cannons. At the great parade on October 1st , Nostitz parade with six cuirassier regiments in front of the allied monarchs present.

FML Nostitz received a two-year vacation on January 23, 1816, which was later extended several times due to a leg injury until he completely resigned from military service in 1821. Since October 12, 1814, Nostitz had been appointed colonel owner of the newly formed Italian Chevauxleger Regiment No. 7 . Count Nostitz retired on June 26, 1821 and died in Prague on October 22, 1840.