A deep ( Dutch Diep , Low German Deep ) is a flowing body of water close to the sea, the bottom of which is wholly or largely below mean sea ​​level . 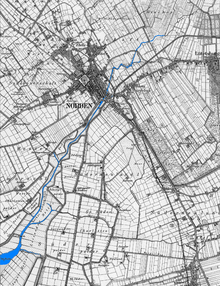 The main flow towards the sea comes about solely because the surface water from the catchment area of ​​the deep can only flow towards the sea. The water level and its gradient at different points of a low depend on the amount of precipitation in the catchment area and on the water level of the sea and its changes. Without water structures to regulate the water level and current are therefore subject to the influence of the tides . Nowadays the drainage of many lows is guaranteed by estuary pumping stations .

Although there are such waters on all flat coasts and coastal areas with flat stretches of land, the use of the term "deep" is essentially limited to the eastern south coast of the North Sea from the IJsselmeer to the Lower Weser . In Dithmarschen , a few such bodies of water are referred to as the “stream”. The Heverstrom near Husum may have had a similar character up to the ninth, possibly even into the 13th century, as long as the North Frisian Uthlande was still a contiguous land mass as the north outer low until the 19th century. A large number of bodies of water have the character of a depression without being designated as such. Some have a river name without identification of the water type, some have generic names that are also used for water bodies with a natural gradient, such as "Bach" or "Aue".

Where rivers flow through glacial valleys into the Baltic Sea, the bottom of their lower reaches can be up to more than 100 km below sea level. Outstanding examples are the Peene up to the Kummerower See and its tributary Trebel , as well as the Recknitz . Unless barrages or weirs have been installed, the water level depends on that of the sea, which in turn is mainly influenced by the direction of the wind. In addition to relatively slow changes, there are also fluctuations of one to two days, which then wander up an underflow in waves.

Conditions similar to those found in lows also exist in sections of inland waters far from the coast. Especially in glacial valleys there are river sections without a gradient in the river bed. In persistently dry weather, the flow can come to a standstill, sometimes even to a flow reversal. The Brandenburg Waterways and Shipping Office has documented the dependence of the gradient of sections of the Havel on the discharge volume. In Yorkshire , England , a barrage was built at the confluence of the River Foss with the Ouse to prevent flooding from the Ouse leading to flooding at its tributary, the River Foss Barrier .

Other waters designated as deep

The word deep is not only used for bodies of water in the shallow inland areas near the coast:

The delimitation of almost all water body names in the coastal area is fluid.

Gullies in the mudflats or between salt marshes are generally referred to as tidal creeks , but in the area of ​​the Lower Elbe this term is also used to refer to inland watercourses.

Many inland watercourses have a continuation in the mudflats, but large creeks close to the banks are mostly known as "... -balje". "Gatts" and Segatt "lows" only begin at some distance from the shoreline.

Many bodies of water now shielded from the tides by a sluice are known as sluice depths . A number of sewage lows are artificially created. Artificial ponds in the coastal marshes are often called Fleet referred, often in proper names in the earlier notation "Fleth". But there are also canals that go back to a natural body of water.

Most of the lows correspond to the marshland waters (type 22 of the classification adopted by the German LAWA ) and here the subtypes 22.1 (regulated by sluices and Schöpwerke) and 22.2 (“rivers of the march”). But not in all marsh waters the bottom of the water is predominantly below sea level. 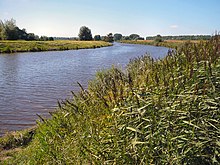 Reitdiep between Groningen and the Lauwers

- mostly with a slight gradient -

- in the province of Drenthe - 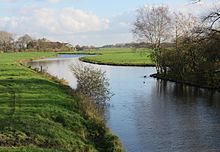 Schanskerdiep as an alternative name to the Buiten Aa in Dollart