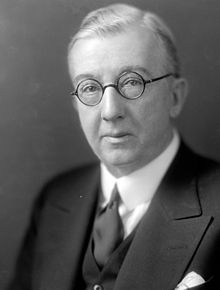 A few years after his birth, his parents moved with him to Corning in 1868 . After attending various schools, he studied at Harvard University in his hometown and later in Berlin , Göttingen and Paris . He then joined the family company Corning Glass Works in 1889 . In 1902 he became vice president of Corning Glass Works, and from 1912 to 1918 he was president of the company. Under his leadership, the company became one of the largest glass producers in the United States. He was also vice president of the Ephraim Coal and Coke Co. in West Virginia and director of the Met Life insurer in New York. He served on the board of trustees of two colleges in New York State .

From February 10, 1922, he was the successor to Ellis Loring Dresel as the United States Ambassador to Germany . He held this office until April 6, 1925. The relationship with Gustav Stresemann was friendly. He was then Ambassador to Great Britain until 1929 . In 1928, Houghton ran unsuccessfully for the US Senate . He was defeated by the Democratic incumbent Royal S. Copeland with only 50,000 votes behind, which corresponded to a difference of 1.1 percentage points.

His son Amory also became a diplomat and served as the US ambassador to France . His son Amo, in turn, followed in his grandfather's footsteps as a politician and was a member of the US House of Representatives from 1987 to 2005 as a representative of New York.