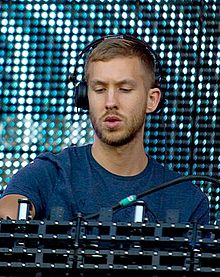 Calvin Harris 2012 at Rock in Rio in Madrid

Adam Richard Wiles (born January 17, 1984 in Dumfries , Scotland ), better known by his stage name Calvin Harris (and Love Regenerator ), is a British DJ , singer , songwriter and producer , especially of electronic dance music (EDM), here in particular House , electro-pop and electro-house . He gained worldwide fame for his song Acceptable in the 80’s , a tribute to the style and culture of the 1980s.

Calvin Harris was born on January 17th, 1984 in Dumfries, Scotland, to a biochemist and a housewife. He made his first musical experiences in his youth when he recorded some demos in his bedroom at home. In an interview, Harris stated that he became very isolated during this time, which had an impact on his personality. His earliest success was the release of the songs Da Bongos and Brighter Days on 12-inch single at the age of 21 under the pseudonym "Stouffer". With these songs and £ 4,000 in his luggage, Harris moved to London, but within a year failed to establish himself artistically and to find more than one singer for his music.

After returning to his parents' house, Harris worked in a fish factory and a supermarket and began uploading songs he had composed to the Internet platform MySpace . There they were discovered in 2006 by a talent scout from the EMI label who got Harris a label deal the same week.

Harris' first album, I Created Disco (German: "I created disco music" ), was released on June 15, 2007 in Great Britain. The album contains synthpop , dance , and electro pop songs . To promote the album, Harris toured the UK with Faithless and Groove Armada .

The first single from the album was Vegas , which was only released as a limited vinyl single. The first chart success came with the electro pop song Acceptable in the 80’s , a homage to the 1980s. The song reached the top 10 of the UK singles chart, where it stayed for 15 weeks. In Germany, the song achieved great awareness through its use in the commercial for the casting show Germany's Next Top Model . As a result, Acceptable in the 80’s reached number 30 in the German single charts. The follow-up single The Girls was able to reach number 3 in the British single charts. Among other things, the song was used in the comedy show Two and a Half Men . In 2007 the Canadian band Dragonette released a new version of the song called The Boys , in which the group makes direct reference to Harris. The last single from I Created Disco was Merrymaking at My Place , which placed at number 43.

Also in 2007, Harris went to the recording studio with Australian pop star Kylie Minogue . He got her attention after another record producer passed Harris' demos to her. Harris admitted that working with Minogue felt unreal but was still fun, although he was very excited before meeting her for the first time. Harris produced and wrote two songs for Minogue's album X : on the one hand the successful single In My Arms , on the other hand Heart Beat Rock . He also produced the song Michael Jackson for the British rap duo The Mitchell Brothers.

In 2008, Harris worked with British hip hop artist Dizzee Rascal on the song Dance with Me . The two musicians first presented the song as an acoustic version at the Glastonbury Festival. The song was released digitally on June 30, 2008 and went straight to the top of the UK singles chart. Then the song reached number 48 in the German single charts and brought Harris a number of nominations and awards, including a nomination at the BRIT Awards and an award at the NME Awards as Best Dancefloor Filler . Harris also produced Rascal's next single, Holiday , which became another number one hit in the UK.

In an interview with BBC Radio 1 , Harris said that he had refused to work with American pop star Lady Gaga because the request came at a time when Lady Gaga was still unknown and the demo recording that had been sent to him had not accepted. However, he later made it clear that he saw Lady Gaga as a "great artist". 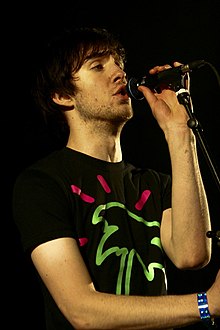 Calvin Harris at the Eurockéennes Festival in France

After the release of his debut album, Harris was already working on the successor. Similar to the first album, the artist recorded his songs on a laptop at home. In the chaos of the reopening of Terminal 5 at London Heathrow Airport , England , this laptop was allegedly lost, so that Harris had to re-record large parts of the album. Harris later admitted, however, that he got his luggage back after a few days. He confessed that the computer hadn't been in his luggage and he was just hoping to get more time to finish his album. He explained, “My label wanted the album, but I only had two songs ready at the time. But now it has turned out really well ... I knew I had to somehow draw people's attention to me. Show that I'm still alive, that my label didn't drop me and that I'm working on the second record. So I thought about this story, and my press lady at Columbia immediately thought it was great. So we put it on my Myspace blog and a lot of newspapers copied it. "

Harris' second studio album, Ready for the Weekend (German: "Ready for the weekend" ), was released in August 2009. To promote the album and its singles, Harris toured the UK, Ireland, France, the Netherlands and the United States. In the run-up to the album release, the single I'm Not Alone was released, which Harris officially presented for the first time on New Year's Eve in Sydney. The song shot to the top of the charts due to high downloads, where it stayed for another week after being released on CD. The album's second single, Ready for the Weekend , reached number 3 on the UK singles chart.

Harris' album Ready for the Weekend also enjoyed some success. In the first week of the chart it topped the UK album charts and number 6 in Ireland. On October 16, the album was awarded gold by the British Phonographic Industry for sales of 100,000 copies. The third and fourth single from the album, Flashback and You Used to Hold Me , could not build on the success of their predecessors. They could only reach number 18 or number 27 on the charts. In addition, a remix of his song Yeah Yeah Yeah, La La La was used in a commercial for the Coca-Cola beverage brand that summer .

In 2010 Harris was able to place himself for the first time in the selection of the Top 100 DJs by DJ Magazine and was voted 94th. That year he worked again with Kylie Minogue on her eleventh studio album Aphrodite . Together with the singer of the band Scissor Sisters , Jake Shears , and Minogue, he wrote and produced the synth pop song Too Much . He also worked with Sophie Ellis-Bextor . For her album Make a Scene , which was released in April 2011, he produced Off & On , on which he was also involved as a writer.

He achieved his greatest chart success and thus greater notoriety as the producer of Rihanna's hit We Found Love , which became a worldwide No. 1 hit in October and November 2011. Calvin Harris was named as a featured artist on this release .

In August 2011, Calvin Harris released the single Let's Go . A year later this became his second chart hit as a leading artist in Germany. The track reached number 2 in the UK and was already his seventh top 10 hit. We'll Be Coming Back with Example was released on July 27, 2012 as a single, was also number 2 in his home country, but did not make it to the chart in any of the German-speaking countries. Only with the single Sweet Nothing with Florence Welch , which was released on October 14, 2012, did he hit another hit in Germany. With 19th place it became the highest-ranked hit to date. The single peaked at number 1 in the UK - it was the second No. 1 hit for him. The album 18 Months was released on October 26, 2012 in Germany. The album entered the charts and immediately reached number 1 in the UK. The sixth single from the album, Drinking from the Bottle, was released in the UK. Even before it was released, the song was at number 5 in the English charts.

The song I Need Your Love with Ellie Goulding is the seventh single and was able to reach good chart positions, it was released on April 12, 2013 and placed at number 4 in the UK charts. The eighth international and final single from the studio album was Thinking About You and was released on August 4, 2013. In the ranking of DJ Magazine , it improved to 15th place.

At the beginning of August 2013 Calvin Harris presented his new single "Under Control", which was created in collaboration with Alesso and the British band Hurts . On October 7, 2013 the song was released in most European countries, Germany followed on November 15. "Under Control" was the first single from his new album Motion . On March 14, 2014, Calvin Harris released the second single Summer . It reached number 1 in the UK charts and made it into the top 5 in other European countries.

On September 7, 2014, the third single from the announced album came out: "Blame" with British singer John Newman also managed to become a number 1 hit in the UK. Newman said about the song before it was released that it lived up to the hype that was being made about it. “I am very excited. I think this is the next step up in my career. "

The last single was the track "Outside" with the vocals of the British singer-songwriter Ellie Goulding on October 20, 2014 on the market. However, it was not enough for the best place in the British charts again. Instead, “Outside” became a number 1 hit in Germany. The song also marked the second collaboration between Calvin Harris and Ellie Goulding after "I Need Your Love" (2013).

Finally, Calvin Harris' album Motion was released on October 31, 2014 on his own label Fly Eye Records and Columbia Records . Apart from the already mentioned single releases, it contains collaborations with R3hab , Firebeatz , Gwen Stefani , Big Sean and All About She , among others . The media reviews were mixed:

“Though there are occasional surprises, such as the skittering steel-drum effect on Dollar Signs (drowsily sung by star-in-waiting Tinashe) and a striking collaboration with the group Haim, who emanate glorious loss and regret, the bulk of the record is bombast as usual. The big pop hooks and breakdowns are here, but there is little sense of Harris's personality. "

- Caroline Sullivan for The Guardian

“Neither the Gwen Stefani team-up Together nor the Big Sean-aided Open Wide ever gels - evidence that Harris hasn't quite mastered the marriage of man and machine, especially with bigger personalities. His largely straight-ahead approach will rankle EDM devotees who are searching for boundary-busting beats, but he's taking his chances with the most unpredictable technology of all: the human voice. "

On June 12th, Calvin Harris posted a trailer on Twitter for his upcoming album. The names Snoop Dogg , Frank Ocean , Migos , Pharrell Williams , DRAM , Travis Scott , ScHoolboy Q , PartyNextDoor , Lil Yachty , Big Sean , Young Thug , Future , Kehlani , Khalid , Ariana Grande and Nicki Minaj were featured as Guests are represented in the album. Previously, some singles from the album were released as audio samples on YouTube, such as Slide or Heatstroke . At the beginning of February 2019 the single "Giant" was released. It is sung by the British solo artist Rag 'n' Bone Man .