Christian Görke (born March 17, 1962 in Rathenow ) is a German politician ( Die Linke ). From December 2003 to January 2014 and briefly from 2014 to 2015 he was a member of the Brandenburg State Parliament and from 2012 to 2014 parliamentary group chairman. He was Finance Minister of the State of Brandenburg from January 2014 to November 2019 and, as a result of the state elections in 2014 , in which he was the top candidate, he was Deputy Prime Minister from November 2014 to November 2019 . He is a member of the state parliament.

Görke grew up with a sister as the son of a teacher. He attended school in Rathenow since 1968, graduated from high school in 1980 and then completed military service with the riot police until 1983 . From 1983 he studied history at the Dresden University of Education . He finished his studies in 1988 as a certified teacher . From that year until 2003 he worked as a teacher in Rathenow and has been a civil servant since 1996. From 1991 to 1993 an external study at the University of Potsdam in the subject of sport followed, which ended with the award of the teaching post for the lower secondary level.

He is divorced and has two children.

His father Hans-Günter Görke (CDU) was the department head for education, health and culture in the Rathenow district administration from 1990 to 1994 . His sister is also a teacher and is a member of the CDU. 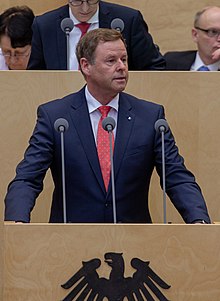 Christian Görke in the Federal Council, 2019

In the third electoral term, he replaced Hannelore Birkholz in the state parliament of Brandenburg on December 1, 2003 , in which he was also in the fourth (2004–2009), fifth (2009–2014) and sixth electoral term (since 2014) , always through a direct mandate in constituency 04 Ostprignitz-Ruppin III / Havelland III . Until her election to the Bundestag was Diana Golze employee in his constituency office in Rathenow.

From September 2007 to August 2012 Görke was parliamentary director of the DIE LINKE parliamentary group. Since October 2007 he has been a member of the Presidium of the State Parliament. On August 20, 2012, he was elected group leader of the party Die Linke , which he was until January 2014. After it became known on December 16, 2013 that Görke was to be the successor of the new Justice Minister Helmuth Markov in the Ministry of Finance as part of a cabinet reshuffle , he was appointed by the Prime Minister on January 21, 2014 and took his oath of office the following day before the state parliament. He resigned his state parliament mandate that same month.

On January 25, 2014 he was elected chairman of the party Die Linke in Brandenburg ; he was also the top candidate in the state elections that year. During the summer tour before the there was criticism from the opposition that he was abusing it for election campaign purposes, as he is also the top candidate of his party. The criticism related in particular to the accompaniment of the summer tour by the Potsdam state parliament candidate and district chairman of the party Die Linke Sascha Krämer, who, as part of a fee contract with the Ministry of Finance, also had the task of “taking photos for the Ministry of Finance's website on the Minister’s summer tour ".

After a disappointing election, in which the left had significant losses and for the first time since 2004 no longer took second place, it was still enough for a continuation of the red-red government coalition with the SPD: In the Woidke II cabinet he was appointed on 5. November 2014 appointed Deputy Prime Minister and Minister of Finance. He resigned the state parliament mandate he had won in October 2014 in January 2015 due to the separation of office and mandate in his left-wing regional association. Since Görke was re-elected as state chairman with only 69% of the votes in 2016, he successfully proposed state minister Diana Golze and state manager Anja Mayer as the first female dual leadership of the state party for election in 2018 .

Cabinet of the State of Brandenburg

Finance Minister of the State of Brandenburg