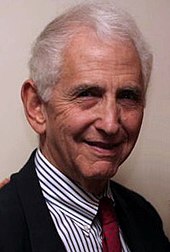 In 1971 Daniel Ellsberg brought the secret Pentagon papers to the public as a whistleblower about the misconduct of several US governments during the Vietnam War . He sees the intelligence surveillance programs that became known in 2013 as a violation of the US constitution.

Daniel "Dan" Ellsberg (born April 7, 1931 in Chicago ) is an American economist , peace activist and former whistleblower about illegal acts of the United States Department of Defense and the White House . His publication of the secret Pentagon Papers in 1971 exposed years of deception of the American public about essential aspects of the Vietnam War . Among other things, the real war goals were deliberately misrepresented by several US governments in a row.

The publication of the documents by the New York Times was banned by the government. The ensuing legal battle went all the way to the US Supreme Court and led to a landmark ruling in which publication was allowed and freedom of the press strengthened. Ellsberg was nevertheless charged with espionage and faced 115 years imprisonment. The trial collapsed when it became known that the Nixon government had broken into the practice of Ellsberg's psychiatrist and illegally monitored him by secret service workers .

Ellsberg, who is still politically active to this day (February 2016), massively criticizes the US war in Iraq . In June 2013, he described Edward Snowden's publications on the PRISM surveillance program as the "most important in US history"; Snowden would protect citizens from the "United Stasi of America". Ellsberg serves on the Board of Directors of the Freedom of the Press Foundation .

Daniel Ellsberg grew up in Detroit and attended the Cranbrook School (now the Cranbrook Kingswood School ) in Bloomfield Hills, Michigan. In 1952 Ellsberg received a bachelor's degree in economics from Harvard University and then studied at King's College at Cambridge University as a Woodrow Wilson Fellow. From 1954 to 1957 he served in the US Marines as an officer . From 1957 to 1959 he was a Fellow at Harvard, where he received his doctorate ( PhD ) in 1962 with a dissertation on Risk, Ambiguity and Decision . An anomaly in decision theory that he has worked out extensively is named after him, the Ellsberg Paradox (1961). In 1959, he took the post of analyst at RAND Corporation . From 1964 the then avowed anti-communist worked under Defense Secretary Robert S. McNamara in the United States Department of Defense .

He then spent two years as a civilian employee of the US State Department in Vietnam from 1965 . There he realized that the Vietnam War could not be won for the USA. Almost everyone in the Department of Defense shared that belief; for career-related and political reasons, however, nobody publicly admitted it. On the contrary: McNamara's staff declared against their better judgment in official press releases that the Vietnam War would pass quickly and without great losses or that the United States and South Vietnam , allied with them , would win. In 1967 he moved back to the RAND Corporation, which worked on behalf of the Department of Defense.

Ellsberg and the Vietnam War

The publication of the secret "Pentagon Papers"

The Ellsberg psychiatrist's filing cabinet, broken into by CIA and FBI staff in a break-in, is in the Smithsonian Museum today . The break-in was authorized by President Nixon, who hoped to get material from Ellsberg's medical record, with which he should be discredited in public .

In his time at the RAND Corporation had Ellsberg access to classified information of the highest classification level of the Pentagon ( " Pentagon Papers ") that the role of President of Truman about Kennedy to Johnson in terms of their attitude to the Vietnam conflict documented, and often in stark contrast the official publications. He copied 47 folders with a total of 7,000 pages of documents and submitted them first to the New York Times, then to the Washington Post . When, on June 13, 1971, the New York Times began printing the documents Ellsberg had provided - which exposed years of deliberate public deception about essential aspects of the Vietnam War - the US government under President Nixon tried hard to get another publication prevent. Among other things, Nixon said to his advisor Kissinger : “ Let's get the son-of-a-bitch in jail! ”(German:“ Let's put the son of a bitch [note: Ellsberg was meant] behind bars! ”) After three episodes of the“ Papers ”were published in the New York Times , Nixon had further newspaper reports banned - a hitherto unique case of censorship in of US history. Ellsberg gave the documents to 18 other newspapers. Publication was also prohibited for these. The dispute went as far as the Supreme Court, which at the end allowed publication by a landmark judgment . Ellsberg was nevertheless charged as a spy under the Espionage Act of 1917. He faced 115 years imprisonment. However, the process burst when it was discovered that Nixon had had Ellsberg spied on and consented to a break into the practice of Ellsberg's psychiatrist - it was hoped that Ellsberg's patient file would contain incriminating information about him that could have been used to discredit him. This illegal operation was entrusted to the same team of former and active FBI and CIA agents that broke into the Watergate complex a year later and triggered the scandal of the same name that cost Nixon the office in 1974. This political affair was also brought to the public by a whistleblower, the high-ranking FBI employee Mark Felt , whose identity the Washington Post reporters Bob Woodward and Carl Bernstein kept secret until 2005.

In the relevant landmark ruling by the Supreme Court, the judges stipulated that the state's interest in secrecy in secret government documents supplied by whistleblowers must, in cases of doubt, take second place to the interests of the public and freedom of the press . One of the judges wrote, referring to the disinformation of the public by the US government exposed by the Pentagon papers :

“Only a free and unrestrained press can effectively expose deception in government. And paramount among the responsibilities of a free press is the duty to prevent any part of the government from deceiving the people and sending them off to distant lands to die of foreign fevers and foreign shot and shell. "

“Only a free, unhindered press can efficiently expose government deceptions. And above all responsibilities of a free press there is the duty to prevent any part of the government from deceiving people and sending them to distant lands to die of foreign diseases and foreign bullets and grenades . "

The citizens' movement against the Vietnam War mentioned by Ellsberg in this context was monitored, manipulated, discredited and suppressed on a large scale by the FBI and CIA with the largely illegal secret programs Operation CHAOS and COINTELPRO .

After the publication of the Pentagon Papers, Ellsberg continued to be politically active. After the 1973 Watergate revelations, his case of illicit possession and theft of state secrets was dismissed due to legal procedural errors. The Pentagon papers were not least the reason for the passage of the Freedom of Information Act , which allows civilians to look into US government documents upon request. To this day, Ellsberg lectures around the world on current events, such as the actions of the US government in Iraq , for which he was heavily criticized by the George W. Bush administration . For the past several years, Ellsberg has worked at the Massachusetts Institute of Technology (MIT).

The National Defense Authorization Act 2012 expanded the powers of the military to detain US citizens and foreigners indefinitely on suspicion. The NDAA should allow the military to indefinitely detain suspected (knowingly or unknowingly) supporters of al-Qaeda , the Taliban or allied forces without evidence. After Ellsberg met several celebrities, including Noam Chomsky , Naomi Wolf , Birgitta Jónsdóttir , Chris Hedges , Kai Wargalla , an organizer of " Occupy London", and Alexa O'Brien, one of the organizers of the New York activist group "US Day of Rage", Having expressed serious concerns about the proposed law, Judge Katherine Bolan Forrest also appealed to the objections of activists, scientists and politicians in her 68-page statement and stopped the NDAA with an injunction.

Criticism of the US government's PRISM program: "United Stasi of America"

After revelations by the whistleblower Edward Snowden , the large-scale monitoring program in June 2013 PRISM the intelligence NSA had become known, Ellsberg spoke to extremely critical:

"Snowden's whistleblowing gives us a chance to roll back what is tantamount to an 'executive coup' against the US constitution."

"Snowden's whistleblowing gives us the chance to push back what is tantamount to a 'government coup ' against the US Constitution."

Ellsberg titled an article in the British Guardian about the affair with the line: Edward Snowden: Saving us from the United Stasi of America and wrote that since the attacks of 11 September 2001 a development've used that the Bill of Rights override that people would have fought for 200 years. In particular, the fourth and fifth amendments to the US Constitution , which protect citizens from unjustified government intrusions into their private lives , have been practically repealed. The assertion of President Obama , all this is legal, "nonsense" is, and that leaders of the US Congress were allegedly initiated and had agreed to make more obvious, such as "broken" ( broken ) the system of control of government power through the people ( checks and balances ). Obviously, the USA is not a police state today - but if another attack like 9/11 comes or a broad anti-war movement like the one against the Vietnam War, then he fears for the existence of democracy. These forces were "extremely dangerous" ( extremely dangerous ).

Ellsberg appeared in the video "Stop Watching US".

Daniel Ellsberg strongly advocates the whistleblower platform WikiLeaks . He said that it was not the revelations but "silence and lies" that put people in danger. He visited Julian Assange several times in his asylum in the Ecuadorian embassy in London and expressed concern about his health conditions. He also publicly stood up for WikiLeaks informant Chelsea Manning, then Bradley Manning , whose temporary detention conditions he described as degrading and approached torture.

The American rock band Bloodrock dedicated the song “Thank You Daniel Ellsberg” to Ellsberg on their 1972 album “Passage”.