from Wikipedia, the free encyclopedia
This is the spotted version , flagged on June 15, 2020 . There are 3 pending changes that have yet to be viewed.

Hartkirchen is located in the Pockinger Heide on the state road 2110 about four kilometers east of Pocking and 2 km away in the immediate vicinity of the Inn . It is located about 22 km south of Passau , 38 km east of Pfarrkirchen , 8 km up the Inn from Schärding in Austria and 35 km northeast of Simbach am Inn . The Rott flows into the Inn about 6 km north of Hartkirchen.

Hartchirchen is first mentioned around 1143 (13th century copy ). It was already a market in the Middle Ages . The place is certainly much older and evolved from the imperial palace Inzing, which is already documented in the 8th century.

The old parish was from 1144 bis 1803 the monastery of St. Nikola incorporated. In 1474 the parish church of St. Peter was completed.

For a long time, the Hartkirchen market was the most important place on the Bavarian side of the lower Inn. He gained part of his wealth by shipping the Inn . In Hartkirchen, the closed construction of the market around a central square can still be seen today.

Hartkirchen was probably one of the oldest courts that we know in the countryside in Old Bavaria. There are also connections here with the Inzinger painting workshop in the Rottachgau. The crossed keys of the coat of arms are the symbol of the parish whose church patron St. Peter is. The earlier dependencies of the parishes of Pocking and Mittich indicate that Hartkirchen was one of the original parishes in this area. The coat of arms indicates the proud past of the market. The coat of arms of the Hartkirchen market has been preserved in the coat of arms of the city of Pocking. The two keys refer to the patronage of St. Peter, the stylized oak is an indication that even in the late Middle Ages the town as a site of Ehaftsgerichts the Court Griesbach is documented to have. At the same time it refers to the defining word of the place name Hart (forest).

In the course of the regional reform , the Hartkirchen market was incorporated into the town of Pocking on October 1, 1971.

Hartkirchen was mentioned in a document as early as 1235 as a market. There used to be a wool, flax and canvas market in January and May . There were also three so-called “main markets”. There was a horned cattle, sheep and pig market on every Friday during Lent and on Gallus Day, and a horse market on Gallus Day. Until today the historical Gallusmarkt takes place for two days every year in mid- October . 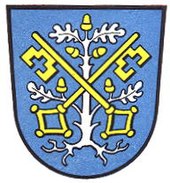 The former coat of arms of the market in Hartkirchen

The late Gothic parish church of St. Petrus , built in 1474 and expanded in 1890 , has late Gothic and Baroque wall paintings. A figure of Mary dates from around 1430 to 1440 , the high altar and pulpit are neo-Gothic.

After the permission to build the school had been granted in July 1967 and the corresponding subsidies had been assured, construction of the Hartkirchen elementary school could begin on August 21, 1967 . The architectural association Dipl.-Ing. Spatz from Griesbach and Ing.Würmseher from Ruhstorf , were already entrusted with the planning and construction supervision. The shell construction was done by the Zwicklbauer, Hartkirchen and Graw, Griesbach consortium. The topping-out ceremony was on November 25, 1967. The new school was ready to move into just in time for the start of school in September 1968 . After the gym and outdoor facilities were completed, the inauguration took place on November 25 , 1969 .

The Toyota Museum Hartkirchen exhibited over 120 Toyotas built from 1971 onwards, including the James Bond Toyota 2000 GT. It was closed on July 1, 2017, and the vehicles will be taken over by the Toyota Museum Cologne.

On the state road is the 17 hectare , up to 600 meters long and 290 meters wide Hartkirchener Baggersee . The facilities include an 8,000 m² sunbathing area, a sanitary and changing house and a kiosk.