The Macquarie Group Limited is a global investment banking - and securities trading company based in the Australian city of Sydney . The Macquarie Group operates primarily as a financial services provider for large corporations and institutional investors . The company is active worldwide in the areas of banking , consulting, investments and fund management and has branches in major financial centers around the world. Macquarie's clients include large corporations, states and countries as well as private wealth millionaires who use advisory services in mergers and acquisitions , underwriting , asset management and as stockbrokers . Macquarie has been listed on the Australian Stock Exchange ASX since 1996 . In 2013 the company employed around 13,700 people.

Macquarie is known to the broad German-speaking public for its funds for infrastructure projects. A visible example is the first toll route in Germany based on the PPP model, the Warnow tunnel . Macquarie also gained notoriety through a co-investment with the energy supply company EnBW in the offshore wind farm Baltic 2 (49.89 percent). Institutional and private investors can participate in these investments through infrastructure funds. 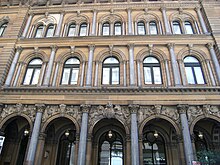 Milestones in the development of the bank since 1969:

Parts of this article seem out of date as of 2012 .
Please help to research and insert the missing information .

The Macquarie European Infrastructure Fund II has held 91.5 percent of the shares in the German Techem since December 2007 . Macquarie is currently looking for a buyer for the four billion euro investment. Macquarie also acquired a majority stake in Thyssengas in 2011 and in Open Grid Europe in 2012 for its funds .

Macquarie's German-speaking investment banking is best known for its private equity and restructuring transactions . For example, Bain Capital was advised by Macquarie on the acquisition of FTE Automotive in March 2013. Further transactions include the sale of D&B Audiotechnik to the investment company Ardian , the takeover of the Weidenhammer Packaging Group by the US packaging group Sonoco, and the purchase of AHT Cooling Systems by PE investor Bridgepoint Capital . In October 2011 a strategic cooperation with the Swiss private bank Julius Baer was decided. All investment banking transactions for Julius Baer's clients are now handled by Macquarie.

The investment subsidiary Macquarie Capital is gaining increasing recognition in the area of ​​institutional venture capital through investments in companies such as Takeaway.com or the online credit platform Commonbond.