The Madras Presidency was one of three original administrative units of the British East India Company , along with the Bombay and Bengal Presidencies . It emerged from Fort St. George in Madras, founded in 1640 . Initially, the British East India Company only maintained individual bases on the coasts, but as a result of the Carnatic Wars and the Mysore Wars , it gained territorial power over large parts of the hinterland in the second half of the 18th century. In 1858, the Madras Presidency, along with the other possessions of the British East India Company, was placed directly under the British Crown. After Indian independence in 1947, the state of Madras emerged from the Madras presidency. In 1953 the northern part was split off as the state of Andhra . The remaining state of Madras was reorganized in 1956 according to the language borders of Tamil and renamed Tamil Nadu in 1969 . 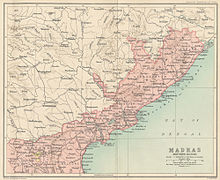 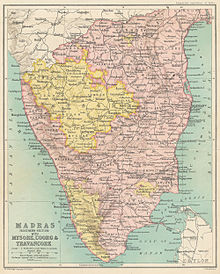 The Madras presidency included almost the entire area of ​​today's state of Tamil Nadu (excluding the districts of Kanyakumari and Pudukkottai ), the entire state of Andhra Pradesh (excluding Telangana ), the northern part of Kerala (region of Malabar ), and smaller parts of Karnataka (districts of Bellary , Dakshina Kannada and Udupi ) and Odisha (districts Ganjam , Malkangiri , Koraput , Rayagada , Nabarangpur and Gajapati ) as well as the union territory of Lakshadweep .

The area of ​​the Madras presidency contributed to several natural spaces. Most of it was on the wide coastal plain on the Coromandel Coast in the east. Behind it rise the Eastern Ghats , a mountain range divided into several mountain ranges that reach heights of over 1,600 meters. In its central-western parts, the Madras presidency had a share in the Deccan Plateau, which extends beyond the eastern Ghats. The Madras presidency also included a stretch of the Malabar coast to the west. In contrast to the east coast, the coastal strip here is only very narrow and is suddenly bordered by the soaring Western Ghats . The highest peaks are found here at over 2600 meters. Around 200 kilometers west of the Malabar coast lie the archipelagos of the Laccadives and Amindives in the Arabian Sea . The three largest rivers in the territory of the Madras Presidency, the Godavari , the Krishna (Kistna) and the Kaveri (Cauvery), have their source in the Western Ghats and flow from there in an easterly direction into the Bay of Bengal. Their deltas have fertile soils and are used intensively for agriculture. While the forests in the lowlands were cut down before the beginning of the British colonial era, the mountains of the Eastern and Western Ghats are still densely forested today.

The climate differs considerably in the different zones that made up the Madras presidency. Due to its location in the tropics, the annual mean temperatures fluctuate only slightly, but they depend heavily on the altitude. In Vijayawada in the lowlands, for example, the average daily maximum temperatures are between 40 ° C in the hottest month, May, and 30 ° C in the coldest, January. In the mountain resort of Kodaikanal , however, only 21 ° C are reached in May, and temperatures drop to 16 ° C in November. As in all of India, the rainfall conditions are significantly influenced by the monsoons . On the west coast it rains during the summer monsoon between June and September, while on the east coast the winter monsoon is the main rainy season from October to December. Between January and May it is dry everywhere. The west coast receives an average annual precipitation of around 3800 mm ( Mangalore ). The vegetation is correspondingly lush here. In the areas in the rain shadow of the Western Ghats on the Dekkan Plateau and in the southern areas of the eastern coastal hinterland, however, semi-desert-like conditions prevail with significantly lower amounts of precipitation (560 mm in Anantapur ) .

The first British settlement in the urban area of ​​Madras ( Chennai ) was established in 1639. In the following year, construction of Fort St. George began. In 1641 the place became the headquarters of the company on the Coromandel Coast and in 1653 it became the presidency of Bantam on Java . In 1763, the stepped Nawab of Arcot region to the British, and in 1766 the Nizam of Hyderabad , the Northern Circars. Further acquisitions followed in the course of the wars against Mysore and the Marathas .

In 1785 the president was replaced by a governor who was subordinate to the governor general in Calcutta ( Kolkata ). In 1858 sovereignty over India passed to the British Crown. Madras existed as a province until India's independence on August 15, 1947 (see History of India ). Under the Constitution of the Republic of India of January 26, 1950, Madras was a Group A state with a presidential-appointed governor and a parliamentary government. In 1951 the state had an area of ​​330,976 km² and 57 million inhabitants.

Between 1953 and 1956, the states of southern India were reorganized according to language borders by the States Reorganization Act : On October 1, 1953, the Telugu-speaking north of Madras became a separate state called Andhra (capital Kurnool ). This was united on November 1, 1956 with the Telugu-speaking east of the state of Hyderabad and renamed Andhra Pradesh (capital Hyderabad ). At the same time, the Kannada-speaking parts of Madras came to the state of Mysore (renamed Karnataka in 1973 ) and the Malayalam-speaking areas to Kerala . The Tamil-speaking southern part remained in the state of Madras. This has been called Tamil Nadu since 1969 .

The Madras presidency was a linguistically inhomogeneous area. Different languages ​​were spoken in different parts of the presidency, most of which belong to the Dravidian language family common in southern India . The two largest languages ​​were Tamil . that was spoken in the southern part of the east coast, as well as Telugu, which was widespread in its northern part . While the Tamil-speaking area of ​​southern India almost entirely fell under the Madras presidency, Telugu was also widespread outside Madras in the neighboring areas of the princely state of Hyderabad . Together, the speakers of these two languages ​​made up more than three quarters of the presidency's population.

In addition, on the west coast in the Malabar Malayalam district and in South Kanara mainly Tulu was spoken. In the district of Bellary was Kannada , the largest language, and in the district of Ganjam in the extreme northeast was Oriya -sprachig. With the exception of Tulu, the distribution area of ​​these languages ​​transcended the borders of the Madras presidency. There were also scattered linguistic minorities, such as Hindustani ( Urdu ) speakers among parts of the Muslim population, Konkani speakers along the west coast and speakers of various smaller languages ​​such as Khond , Savara , Gadaba , Koya and Gondi among the tribal population.