Matthew Evan "Matt" Nieto (born November 5, 1992 in Long Beach , California ) is an American ice hockey player who has been under contract with the Colorado Avalanche in the National Hockey League since January 2017 . Before that, he spent four years in the San Jose Sharks organization .

Matt Nieto grew up with his two sisters in Long Beach , California , in a neighborhood marked by gang crime . His father worked as a dock worker, while his mother worked as a make-up artist . Nieto began roller hockey with the YMCA at the age of three . He started playing ice hockey a little later at the LA Hockey Club , an organization of the Los Angeles Kings , to which Emerson Etem and Rocco Grimaldi also belonged.

At the age of 14, Nieto left California and from then on attended the Salisbury School , a preparatory school in Salisbury , Connecticut, over 4,000 kilometers away with the help of a full scholarship . In his first and only season at the school, the winger scored 18 points in 28 games, drawing the attention of the USA Hockey National Team Development Program (NTDP). As a result, he moved to Ann Arbor in the state of Michigan in the summer of 2008 to be part of the central talent factory of the US ice hockey association USA Hockey .

With the National Team Development Program, Nieto took part in the game operations of the North American Hockey League and the following year in the United States Hockey League , the highest junior league in the USA, but also played a number of non-competitive games, especially against college teams . In addition, the NTDP forms the U18 national team of the USA, with which he participated in the 2009 and 2010 World Championships and won the gold medal there.

After the 2009/10 season, he retired from the NTDP for reasons of age and decided, instead of switching to one of Canada's top three junior leagues, to study at Boston University , where he was also awarded a scholarship. As the second youngest player in the Terriers roster , he scored 23 points in 39 games in his first year at college, which aroused the interest of the scouts of the National Hockey League . Eventually he was selected in the 2011 NHL Entry Draft in 47th position by the San Jose Sharks , making him the first Californian to be chosen by the Sharks in the draft. As a sophomore, he significantly increased his personal statistics to over one point per game, an average that he did not quite achieve in the 2012/13 season.

In April 2013 Nieto signed an entry-level contract with the San Jose Sharks from the National Hockey League (NHL), which shortly thereafter gave him to the Worcester Sharks , their farm team from the American Hockey League (AHL). There the winger finished the season with eleven appearances, four assists and two goals. The following season 2013/14 he started in the NHL squad of the Sharks and was sent to the AHL only once for two games during the season. In total, he came as a rookie on 66 NHL missions and scored 24 points scorer, and he particularly knew how to convince in the subsequent playoffs ; although the team lost to the Los Angeles Kings in the first round , Nieto contributed five scorer points in seven games.

In the 2014/15 season reached Nieto with 27 points in eighth place the team internal scorer list, missed the Sharks, however, for the first time in ten years the playoffs . Under the new coach Peter DeBoer , Nieto took on a clearly defensive role in the squad at the beginning of the 2015/16 season , but remained a regular player. In the summer of 2016, his expiring contract was extended by one year. 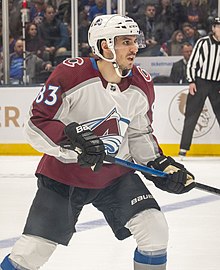 Matt Nieto in the Avalanche jersey, 2020

In January 2017, Nieto was to be sent to the Sharks' new farm team, the San Jose Barracuda , via the waiver . However, the Colorado Avalanche took over the contract from the American.

Squad of the Colorado Avalanche in the season 2019/20