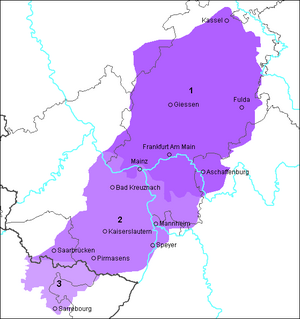 Rheinfränkisch is a comprehensive term for the following dialects in West Central German, which are High German in the broader sense :

They are separated from the north and west bordering Moselle Franconian , among other things, by the dat-das-line , which runs from Völklingen on the Saar via Simmern , Sankt Goar and Limburg to Dillenburg and then between Siegerland and Wittgenstein . Areas in the southern Hunsrück towards the Nahe are, despite the dat, also assigned to the Rhine Franconian; the transitions are fluid here. It is separated from the South Franconian , Alemannic and East Franconian dialects in the south and east by the Speyer line , Germersheim line or "appel-apple line" (e.g. Weißenburg - Wörth am Rhein - Speyer - Sinsheim - Eberbach - Mudau - Wertheim ).