TAP Air Portugal ( Portuguese as Transportes Aéreos Portugueses founded in 1945, shorthand TAP ) is a parastatal and the largest Portuguese airline based in Lisbon and hub to the local airport Humberto Delgado Lisbon and member of the airline alliance Star Alliance .

On March 14, 1945, Transportes Aéreos Portugueses (Portuguese Air Transport) was founded in Lisbon. In the same year the company acquired two Douglas DC-3s . It made its first commercial flight on September 19, 1946 between Lisbon and Madrid. On December 31, 1946, the connection between Lisbon - Luanda ( Angola ) - Lourenço-Marques ( Mozambique ) was opened. The travel time there and back took 15 days, required 12 stopovers and was the longest scheduled flight a DC-3 made at 24,540 km. 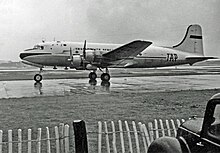 The first Lockheed Super Constellation was put into operation in 1955 in order to be able to serve longer, mostly long, routes without stopping. In 1960, TAP was one of the few airlines in Europe to fly to Rio de Janeiro . In July 1962, TAP received the first Caravelle VI-R , with which it entered the jet age. The company then added other destinations to its flight plan, including Las Palmas de Gran Canaria and Santa Maria in the Azores (1962), Munich and Frankfurt am Main (1963), Geneva and Faro (1965) and other European destinations. TAP decommissioned all aircraft with piston engines by 1967 and at that time only flew with jet-powered aircraft of the types Caravelle, Boeing 727-100 and Boeing 707 for a while . The fleet was expanded with Boeing 747-200 and Boeing 727-200 in the 1970s . From the beginning of the 1980s, the company operated under the name TAP Air Portugal . At the same time, the company put its first Boeing 737-200s and long-haul Lockheed L-1011-500 aircraft into service, which replaced the Boeing 707 and Boeing 747.

At the beginning of the 21st century, the previous name TAP Air Portugal was changed to TAP Portugal . At the same time, the first Airbus A330 aircraft were put into operation. TAP has also been a member of the Star Alliance since March 14, 2005 .

In December 2006, TAP announced the acquisition of a 99.8% stake in the Portuguese regional airline PGA Portugália Airlines .

During 2011, the Portuguese government announced the privatization of the company. This is considered part of the EU's € 87 billion rescue package . After several attempts, the last attempt at privatization failed in December 2012 and was postponed until 2015. In spring 2015 there were still two bidders: Avianca and Azul Linhas Aéreas . The Portuguese state then sold 61% of TAP Portugal to Azul founder David Neeleman and Portuguese entrepreneur Humberto Pedrosa , owner of the Barraqueiro group, for around 350 million euros.

Since May 2016, 50% of the airline belongs to the state of Portugal again. Atlantic Gateway reduced its stake to 45%, with management remaining private; the remaining 5% of the shares are reserved for employees. It is also planned that the Chinese HNA and its Hainan Airlines will join the consortium and indirectly acquire up to 20% from TAP.

In September 2017 the company was renamed TAP Air Portugal again. In 2018, Antonoaldo Grangeon Trancoso Neves took over as CEO from Fernando Pinto, who had previously held the position for 17 years.

On July 3, 2020, it was announced that the Portuguese state would acquire a further 22.5% of the shares in Atlantic Gateway and thus hold 72.5%.

On short and medium-haul routes, the seats in Economy Class in the Airbus fleet cannot be reset. At least one small snack is offered on all flights. On long-haul routes , all seats are equipped with a personal in-flight entertainment system , and food and drinks are included in the flight price.

On the short and medium-haul routes, a seat reservation in the front part of the aircraft can be booked for an additional charge . In the Airbus fleet, seats were installed here, which, in contrast to the seats further back in the aircraft, have an increased seat spacing and an adjustable headrest. The seats are also equipped with a tablet holder and a power connection. The meals in Economy Xtra have also been revised, a warm meal is offered at certain times. On long-haul routes, this class offers increased seat spacing and the seats can be folded back a little further. Priority boarding is included from January 2020.

On the short and medium-haul routes, the same seats are used in the Airbus fleet as in the Economy Xtra. There is a better range of food and drinks. On long-haul flights, full-flat seats are offered in most aircraft.

Flight destinations in the DA-CH area

In the past, the airports in Stuttgart , Cologne-Bonn and Basel-Mulhouse were also served . However, these routes were discontinued in October 2019 because the network was being rebuilt and the future would like to concentrate more on expanding its own long-distance routes.

TAP maintains codeshare agreements, including those from the Star Alliance network (here marked with *): 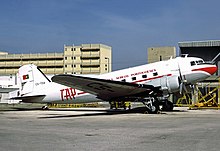 A Douglas DC-3 from TAP

Of the 53 aircraft ordered the originally ordered 12 were Airbus A350 in 14 Airbus A330neo converted. This was announced on November 13, 2015 by the consortium Gateway, the new co-owner of TAP Portugal.

In the course of its existence, TAP also used the following types of aircraft:

TAP suffered a total of four total aircraft losses from 1945 to July 2020 at TAP and TAP Air Portugal; two of them resulted in deaths. However, three of the four total write-offs occurred in 1948. Complete list:

As a result of this accident, among other things, the runway has meanwhile been significantly extended by means of an elaborate stilt construction.

Airlines from Portugal
Members of the Star Alliance