Velden am Wörther See [ ˈfelden ] ( Slovenian Vrba na Koroškem ) is a market town and a legally recognized climatic health resort with 9025 inhabitants (as of January 1, 2020) in the Villach-Land district in Carinthia . The place is one of the best known and most popular tourist destinations in Austria .

Velden occupies the western bay of the Wörthersee .

Parish Church of Our Lady

The oldest written mention of Velden comes from the year 1150. The name is derived from Velben (pasture).

Since the 12th century, the Velden area belonged to the Hohenwart Lordship and Castle , which over the centuries belonged to the Counts of Ortenburg and Cilli , the Millstatt Order of St. George and the Habsburgs . In 1545 the Khevenhüller acquired the rule of Landskron and Velden. The rule of Velden, which was independent from 1603, became the property of the Counts of Dietrichstein in the course of the Counter Reformation in 1629.

When the rule was dissolved by the municipal law of March 17, 1849, the municipal territory comprised the cadastral communities of Velden, Augsdorf, Duel, Lind Emmersdorf, Kerschdorf, Köstenberg and Sand. On January 1, 1850, these communities became the independent large community of Velden, which changed its size several times in the 19th and 20th centuries. When the municipal structure in Carinthia was reorganized in 1972/73, the municipality was reduced to roughly the size of 1850.

In 1853 the liner shipping started with the paddle steamer "Maria-Wörth". Eleven years later, the Wörthersee was connected to the railway network by extending the Drautalbahn (now known as the Südbahn ) from Klagenfurt to Villach . In the same year, 1864, with the opening of the first bathing establishment in Velden, which was soon followed by others, the development of the spa began.

On March 13, 1881, there was a major fire that destroyed the old rural Velden and contributed to the fact that Velden was developed into a villa health resort before the beginning of the bathing season.

On March 18, 2017, the local council unanimously decided to stop construction for two years in order to put a stop to the further construction of "blocks" on or near the lake. The endeavor is to preserve free access to the lake and the already polluted place and landscape for locals and tourists. A development plan is to be drawn up by November 2018 that will create more open spaces and green spaces, especially in the bank area.

According to the 2001 census, the market town of Velden had a resident population of 8,545, of which 93.1% had Austrian, 3.6% German and 1.8% Bosnian citizenship. The proportion of Carinthian Slovenes in the total population was 2.8%.

78.7% of the people of Velden professed to be part of the Roman Catholic Church , 7.2% to the Protestant and 1.2% to Islam , and 8.6% of the population was without religious denomination. 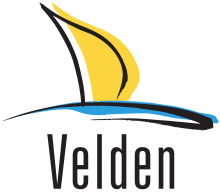 With Ferdinand Vouk , the SPÖ provides the mayor.

A coat of arms with the castle portal on a wave shield base covered with water lilies has been used by the community since around 1900 . The current shape goes back to a design by the local graphic artist and mayor (since 1954) and honorary citizen Heinrich Ebner (1911–1998).

The base of the wave shield and the water lily characterize the location of the main town on Lake Wörthersee; the Mannerist castle portal from 1603 is reminiscent of the Khevenhüller family and their summer residence in Velden. The coat of arms was officially awarded to the market town on September 4, 1965.

The official blazon is:

“A shield divided by red and blue in a silver wavy cut in a ratio of 3 to 2, the lower field of which is divided by six silver wavy lines parallel to the cut. In the base of the shield there is a golden, black-framed water lily with three green, black-framed leaves, which is raised by a silver, black-grooved rustic portal (shape of the Velden castle portal) that extends to the top of the shield. "

The flag is red and white with an incorporated coat of arms.

Cities and municipalities in the Villach-Land district