The city of Veria is located in the southwestern foothills of the Central Macedonian Plain. To the west and southwest, the urban area is bounded by the eastern foothills of the Vermio Mountains. The flat areas of the Central Macedonian Plain border the city directly to the north, east and south. South of the city, the Aliakmonas River passes the Vermio Mountains in the south and the Pieria Mountains in their north (Kastanea Pass) and enters the Central Macedonian Plain. South of Veria the Aliakmonas is dammed up to the Sfikia reservoir , southwest of Veria there is the much larger Polyfytos reservoir of the same river. The city of Veria is traversed by the Tripotamos , which, coming from the Vermio Mountains in the west, flows eastwards towards Aliakmonas and Loudias .

Thessaloniki is 65 km northeast of Veria. After Naoussa in the northwest is 16 km away, Kozani is situated 42 km to the west and Katerini 38 km southeast of Veria. Vergina , the city with the royal tomb of Philip II , is located 11 km east-southeast of Veria across the Aliakmonas on the northern foothills of the Pieria Mountains.

Theagenes (2nd century BC) writes in the Macedonica about the deity Beroia , a daughter of Beres and the sister of Mieza and Olganos . The city was named after her. 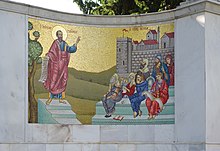 Mosaic at the memorial of the Apostle Paul

The area around Veria is one of the oldest settlements in Greece. Finds from Nea Nicomedeia 9 km northeast of the city date to around the year 6250 BC. The first written mention of the place can be found in Thucydides in his work on the Peloponnesian War . 432 BC The armed forces of Athens and the Macedonian king Perdiccas II met before the siege of Potidea and after the conquest of Thermi near Veria. The Athenian armed forces under Callias II tried to conquer Verias, but failed.

Veria experienced a significant boom in the time of the Diadochs of Alexander the Great, the Hellenistic period. 288 BC BC Pyrrhus , king of Epirus , conquered the city. 278/279 BC Celts plundered the city as part of their incursions into Greece. In the further course the city fell back to the Kingdom of Macedonia. Veria continued to flourish under the rule of the Antigonids with the kings Perseus and Philip V. Citizens from Veria occupy prominent positions in the military and administration of the Kingdom of Macedonia under the Antigonids.

Around 50 AD, according to the biblical book of Acts, the Apostle Paulus visited Veria and found a positive response from the residents to his sermons ( Acts 17.10  EU .13 EU ; 20.3f. EU ). In the immediate vicinity of the center there is a modern memorial that commemorates the stay of the apostle. A few years later a Christian diocese was established with a bishop's seat. In the further course of Roman rule, Veria even became the capital of the Roman province of Macedonia, especially after the decline of Vergina (Aegae) and the settlement of Romans near Dion and Pella. The last written record of Veria's history in antiquity dates back to AD 313, when Christianity was about to become the dominant religion in the Roman Empire. 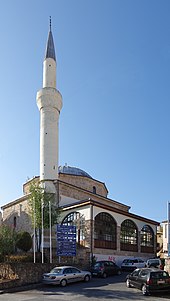 Despite the prominent importance of Veria during Roman rule, there are very few written records about the city in the further course of history under predominantly Byzantine rule. In the 10th century the Bulgarians conquered the area and then lost it again to Byzantium. The Byzantine Empire was only able to maintain its rule until 1204.

With the fall of Constantinople as part of the fourth crusade and the establishment of the Kingdom of Thessaloniki , Veria first fell to this crusader state. Its rule does not last long; as early as 1224 the despotate of Epirus conquered the area back as part of its expansion to the northeast, thereby ending the rule of the Latin house of Montferrat . However, the Byzantine state was only able to exercise control over Veria for barely a century. Under the rule of Ioannis Kantakouzenos, Veria was described as a large and populous city during this period. On the other hand, the total of 51 churches from Byzantine times indicate that Veria had at least a lively spiritual and religious life.

Byzantine rule ends with the conquest of Verias by the Ottomans in the 15th century. The exact date of the conquest is not exactly clear: Veria fell to the Ottoman Empire at the same time as Thessaloniki in 1430, 1433 or 1448. It is not known whether the conquests of 1430 and 1433 were followed by permanent or only temporary rule by the Ottomans. The first attack by Turkish forces on Veria was recorded in 1331 under the Emirate of Karasi, who supported the respective Byzantine pretenders as auxiliary troops. In the middle of the 14th century, Veria fell under the rule of the Serbian king Stefan Dušan . After his death in 1355, however, the Serbian Empire disintegrated, Veria initially fell to the counter-emperor Simeon Palaiologos , and from 1362 to be under the sovereignty of the emperor Stefan Uroš V and Mrnjavčević . After the Battle of Mariza in 1371, the Ottomans occupied Veria, the exact date is not known. Temporary Ottoman conquests took place in 1373, 1383 and May 8, 1387. In the winter of 1393 and 1394, the Ottoman Sultan Bayezid I stayed in Veria to coordinate the campaigns of his armed forces in the Peloponnese. The rule of the Ottomans over Veria began in 1448. In 1461, Sultan Mehmet II stayed in town and negotiated the transfer of the fortress Monemvasia in the Peloponnese by the despot of Morea to the Ottoman Empire.

Monastery records show the first Ottoman and Turkish settlers as early as the 14th century. In the course of Ottoman rule, extensive settlement movements resulted in a significant increase in the non-Christian population; Turks , Albanians and Wallachians in particular settled here. A Verias tax list from 1528 shows that there were 234 Muslim and 669 Christian families at that time. In 1568, 425 Muslim and 459 Christian families were registered in Veria. Between 1568 and 1617 there was a significant decrease in population: in 1617 there were 150 taxable families, in the second half of the 16th century there were 4,000 houses in 16 Muslim and 15 Christian neighborhoods or city districts. For the first time, two Jewish communities that were found in the city were also mentioned. The non-Muslim parts of the population are divided into Greeks , Serbs , Bulgarians , Jews and Wallachians in the second half of the 16th century . At the end of the 18th century, the French traveler Félix Beaujour noted that Veria had 8,000 inhabitants. William Martin Leake reported in 1806 of 2000 families, of which 1200 were said to be Greek. In 1798, Veria fell under the rule of Ali Pascha Tepelena (Pasha of Ioannina), who provided the city with fortresses.

From the Greek War of Independence to the Present

In 1822 Veria was also the scene of fighting during the Greek War of Independence (1821–1829). In February 1822 the Greek insurgents attacked under the leadership of the Armatolen Gero-Karatasos Veria. In contrast to the neighboring town of Naoussa, it was not possible to conquer it ; in March 1822, 70 to 80 resistance fighters from Veria were arrested. In April 1822 Naoussa fell back to the Ottoman Empire, the fighting in the Veria area during the War of Independence ended with this Greek defeat.

In 1831, after the founding of the Kingdom of Greece, the Ottomans in Veria recorded 12,732 male residents in the area of ​​Veria by means of a census. Only 13.2% of the male residents are said to have been Muslim, which would indicate a significant decline in the Muslim population. This decline in the Muslim population was compensated for by the settlement of Ottoman refugees from the Peloponnese after the end of the Greek War of Independence in 1829. In August 1864 (or 1862) there was a major fire in Veria, which destroyed a considerable part of the city. The city was subsequently restored. Struck reported in 1908 that Veria had 2,800 houses and 13,900 residents. 5500 inhabitants are Muslim, 5000 are Greek, 800 are Muslim Sinti and Roma and 600 Sephardic Jews. Two years earlier, an Ottoman census registered 14,000 inhabitants in 32 urban districts with 2,131 houses.

In the spring of 1905 Kapitan Akritas (K. Mazarakis) took over command of Greek underground fighters in the Veria-Naoussa-Edessa region in Veria. In the further course there were armed clashes between the Greek underground fighters, Macedonian and Bulgarian insurgents and the Ottoman troops. On November 1, 1912, the Greek army captured Veria as part of the first Balkan War . Then the place became part of the Kingdom of Greece.

After the Greek defeat in the Greco-Turkish War (1919–1923), there was a massive upheaval in the population structure of Verias. The " population exchange " of 1.5 million Greeks and 0.5 million Turks agreed between Greece and Turkey in the 1923 Treaty of Lausanne resulted in the Turkish population having to leave Veria. In Veria “in return” Greek refugees from Asia Minor, Eastern Thrace and the Black Sea coast settled. In 1928, as a result of this "population exchange", Veria had a share of refugees in the total population of 43 percent.

In 1941 the Wehrmacht troops conquered the city as part of the Marita company and brought the place under German occupation. In October 1944, the German troops withdrew from Greece.

Veria was recognized as an independent municipality (dimos) after the annexation to Greece in the first Balkan war in 1918 . In 1997 the municipality of Veria was expanded to include several neighboring municipalities due to the reform of the Greek local government. With the administrative reform of 2010 , four neighboring municipalities were again incorporated into Veria, which - like the previous municipality of Veria itself - have since formed municipal districts (Ez. Dimotiki enotita ). The old municipal districts are run as city districts (dimotiki kinotita) or local communities (topiki kinotita) . The indicated population figures come from the result of the 2011 census.

The economic mainstay of the modern era was and is the cultivation and processing of cotton in Veria. The water-rich Macedonian plain surrounding the Veria is very suitable for growing cotton.

Veria has a very good connection to the Greek transport infrastructure. The main mode of transport in Greece, road transport, connects Veria via national road 4 from (Nea) Chalkidona to national road 2 ( Florina –Edessa – Thessaloniki – Kavala) in the prefecture of Thessaloniki via Alexandria to Kozani . The national road 4 passed in a winding stretch from Veria the southeast and southern flanks of the Vermio massif north of the Aliakmonas river (Kastanea pass) via the village of Polymylos to Kozani. Veria has been connected to the Greek motorway network since 2004. The highway 2 (Egnatia; Europastraße 90 ) connects to the west with Veria Kozani and Grevena along the route of the national road 4 having a continuous navigable highway. the motorway can be used continuously to Ioannina and Igoumenitsa . To the east, motorway 2 leads to Klidi on the coast of the thermal gulf, where it then runs jointly with motorway 1 towards Thessaloniki . In addition to the continuation of Autobahn 2 beyond Thessaloniki, there is a continuous motorway connection with Chalkidiki , Kavala , Xanthi , Komotini and Alexandroupoli . Another well-developed road connects Veria via Kopanos, Lefkadia and Skydra with Edessa in the north. The same road also connects Veria with the second largest city in Imathia Prefecture, Naoussa , which is west of Kopanos. Road connections that lead south across the Aliakmonas River and the Pieria Mountains do not exist.

Veria also has a connection to the Greek railway network. The standard gauge line Thessaloniki Edessa Florina runs through the urban area of ​​Veria including a train station. However, there is no direct railway line to Athens.

Panoramic view of the city of Veria

Municipalities of the Central Macedonia Region