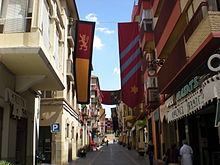 Caspe is a Spanish city ​​in the province of Zaragoza in the autonomous region of Aragon . It is the capital of the Comarca Bajo Aragón-Caspe , but no longer belongs to the Catalan-speaking part of the Franja de Aragón . The place had 9,748 inhabitants on January 1, 2019. The city is located 104 km southeast of Saragossa near the mouth of the Guadalope in the Ebro , which is dammed here by the reservoir of Mequinenza . The annual mean temperature is 14.6 ° C, the annual rainfall 325 mm; this makes it one of the driest places in Aragón.

Contrary to a widespread tradition, the place name is likely to go back to the Arabic “kasba”. The place, already inhabited by an Iberian tribe in prehistoric times, was annexed to the Kingdom of Aragon after the reconquest of the Moors in 1169 by King Alfonso II (Aragón) . The place was under the rule of the Johanniter . In 1412, the compromise of Caspe on the succession in Aragon was made in Caspe . In the Guerra dels Segadors (1640-1652) the place was the target of attacks by Franco-Catalan troops. The War of the Spanish Succession (1701–1711) represented Caspe differently than the neighboring towns the cause of the Bourbons. During the Carlist Wars , Caspe sided with Queen Isabella II. During the Spanish Civil War , Caspe was the seat of the Republican Aragonese government.

The city's economy is characterized by arable farming (olives, irrigation, especially with cherry plantations) including processing plants, the service sector and industrial assembly as well as textile processing. Adidas maintains a central warehouse for Spain in Caspe. Livestock breeding also plays a role. The city includes the four industrial areas El Castillo , El Portal , Cabezo Mancebo and Los Arcos . In autumn, Caspe holds the Expocaspe trade fair, the Naupesca exhibition and a coin and stamp salon . Increased efforts are being made in the tourism sector.

Municipalities in the province of Zaragoza