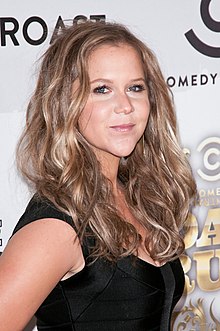 Dating Queen (original title: Trainwreck (in German: Zugwrack , figuratively an absolute fiasco )) is an American comedy film from 2015 . Directed by Judd Apatow , the screenplay was written by lead actress Amy Schumer . This is the first Apatow film that is not based on one of his own scripts. The film premiered on March 16, 2015 at the South by Southwest Film Festival . It was released in US cinemas on July 17, 2015 and in German cinemas on August 13, 2015. A version that was around four minutes longer was published as an Extended Edition on Blu-ray Disc .

At the age of nine, Amy found out from her father Gordon why he wanted to separate from her mother: He thought monogamy was unrealistic.

Years later she works as an editor for a men's magazine in New York. Her boss Dianne gives her the job of writing an article about the sports medicine specialist Dr. Aaron Conners, although she hates sports. Instead, Amy prefers to drink, loves parties, and often has one night stands. After many dates, her admirer Steve hopes in vain for a steady relationship and is shocked to her confession to the many male contacts on her cell phone.

At the time, Amy was more preoccupied with the situation of her father, who had moved to a nursing home because of multiple sclerosis . Together with her sister Kim, she takes care of the now vacant house. Kim is disappointed in her father, who was drunk all his life, neglected his family and cheated on him. She would love to dispose of all his belongings, but Amy steps in. When Amy Dr. Conners meets for an appointment meeting, he soon reveals her to be a grumpy sportsman. During the interview, she begins to hyperventilate when Kim sends her a message. Her father is supposed to move to a cheaper nursing home. Dr. Conners takes care of the broken up Amy. The two of them go out to eat, then to a bar and finally to his home. For the first time after sex, Amy breaks her rule not to stay with her lover.

Aaron gets Amy to put her fears of commitment aside when he stands by her the next day when her father falls in the clinic. Both begin a relationship that is initially very harmonious. When her father dies, he is by her side to support her. Aaron realizes that Amy is having some problems, but the situation escalates during an awards show. While giving an audience speech, Dianne threatens Amy to fire her if she doesn't answer her phone. Without a choice, Amy leaves the room, which in retrospect leads to an argument between her and her partner. Completely tired from the nightly argument, Aaron cancels an important operation the next day. He asks Amy to take a break from the relationship until the operation is over. However, she responds to his words with complete isolation and insists on ending the relationship.

After Amy loses her job because she ends up drunk in bed with Dianne's underage employee, she seeks contact with her pregnant sister. A conversation with her stepson makes it clear that she still loves Aaron. She decides to prove to him that she wants to try to have a serious relationship with him. To win him back, she rehearses a dance with the cheerleaders of a basketball team, and Aaron gives in when he reaches his favorite song Uptown Girl. They both decide to give their relationship another chance.

The film review aggregator Rotten Tomatoes has calculated an approval rate of 85 percent in an evaluation of 273 reviews. The consensus of the reviews reads: "With sharp humor, understandable characters and a hilarious depiction of Amy Schumers, Dating Queen wrestles devotion from all moviegoers except the worst Rom-Com phobics." The audience result has leveled off at 66 percent positive reviews, shortly after At the cinema release, viewers gave an average of 4 out of 5 stars. On Metacritic , Dating Queen received a Metascore of 75 out of 100 based on 45 reviews. The lexicon of the international film praises: “The film debut of the stand-up comedian Amy Schumer unleashes a firework of gags by reversing stereotypical gender images from romantic comedies, which only turns into more conventional paths towards the end. Despite a few vulgar insertions, charming and played excellently even in the supporting roles. "Asokan Nirmalarajah gave film releases 4 out of 5 possible stars and said:" Together, Apatow and Schumer circumnavigate the clichés of romantic comedy with refreshingly down-to-earth characters and ironically undermine the common role models of single Women and men: "Dating Queen" is a clever, funny, tragicomic and contemporary love film. "

Dating Queen grossed $ 10.7 million on the day it premiered in the United States and Canada. On its opening weekend, the film grossed a total of $ 30.2 million, exceeding expectations. This was after Knocked Up (Knocked Up) , the US dollar during the first weekend grossed 30.7 million, the second-best start for a film directed by Judd Apatow . Dating Queen had recorded the production costs of 35 million US dollars just four days after its theatrical release in North America (on July 21, 2015) . Dating Queen was able to bring in around 140.8 million US dollars worldwide.

Amy Schumer received the Comedy Award for her work on film at the 2015 Hollywood Film Awards . For the Golden Globe Awards in 2016 was Trainwreck as Best Picture - Musical or Comedy nomination; Schumer also received a nomination for Best Actress - Comedy or Musical . The film was nominated for Best Comedy and Hader was nominated for Best Actor in a Comedy at the Critics' Choice Movie Awards in January 2016 . Schumer was honored as the best actress in a comedy . As part of the 66th Eddie Awards, the film was nominated on January 4, 2016 by the Association of American Cinema Editors in the category Best Film Editing - Comedy or Musical . Schumer was also for her role in Trainwreck , with the Special Award for Breakthrough Comedian of the Satellite Awards 2015 awarded.

Rampage in the cinema in July 2015

There was a rampage on July 23, 2015 while the film was showing in Lafayette , Louisiana . The 59-year-old perpetrator John Russell Houser opened fire on other viewers right in the cinema. He killed two women, injured nine other people, and eventually shot himself.

The dubbing of the film was done by RC Production Kunze & Wunder GmbH & Co. KG. The dialogue book was written by Nana Spier , who was also responsible for the dialogue direction.