from Wikipedia, the free encyclopedia
This is the spotted version , flagged on April 19, 2020 . There is 1 pending change that has yet to be viewed. 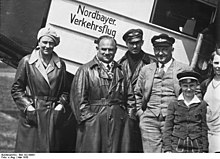 Hermann Köhl (with leather coat) at the Fürth-Atzenhof airfield , 1930

Hermann Köhl (born April 15, 1888 in Neu-Ulm , † October 7, 1938 in Munich ) was a German aviation pioneer . He was a fighter pilot in World War I , switched from the military to Junkers Luftverkehr AG in 1925 in order to set up civil night air traffic there, and when Luft Hansa was founded in 1926, he became its first night flight manager. From 1927 he took part in attempts to fly at the Atlantic Ocean and in 1928 was the pilot of the Junkers W 33 “Bremen” during the first successful crossing of the Atlantic in an east-west direction by a powered aircraft.

He was the second of eight children of the future Bavarian Lieutenant General Wilhelm Köhl and his wife Walburga, née Mahler. The family lived at Ludwigstrasse 6 and Hermann attended elementary school and later high school in Ulm. At that time his father was captain and battery chief in the 2nd foot artillery regiment and was transferred to Munich in 1897, where the family moved. Hermann was there for some time in the cadet corps , but was dismissed for poor leadership. He therefore completed his school years in the secondary schools in Nuremberg and Augsburg.

In 1906, Köhl joined the Pioneer Battalion No. 13 of the Württemberg Army as a flag junior , became a lieutenant on August 22, 1908, and from 1913 attended the Military Technical Academy in Berlin. Originally, he was supposed to receive a two-year training course here, but this was interrupted by the outbreak of the First World War.

At the beginning of the war, Köhl was deployed as a platoon leader in his battalion on the Western Front and suffered a severe leg injury in the Vosges , which meant that he was no longer able to continue serving in this unit. He reported to the air force , where he was initially an observer and there earned his first reputation as a navigation talent. On March 22, 1915 he was promoted to first lieutenant and squadron leader in Kampfgeschwader 4 (Kagohl 4), with whom he carried out night flight operations in Flanders in particular. In Böblingen he was trained as a pilot himself. At the end of 1916 he was shot down in a dogfight and spent some time in the hospital. In March 1918 he was promoted to captain and commander of a bomber squadron, shortly afterwards he received the highest Prussian honor for bravery, the order Pour le Mérite, for his work in the destruction of the ammunition depot in Blargies . During a mission in May 1918, his machine had to make an emergency landing and he was taken prisoner by the French. After several attempts, he finally managed to escape from custody in September 1919.

Back in Germany, Köhl reported back to his former engineer battalion and was initially entrusted with setting up a train of headlights. After a few days he was called to the Württemberg police force, for which he was to set up a police squadron in Böblingen. However, after the Versailles Treaty banned aviation in Germany and the police aircraft had to be disabled, Köhl joined the Reichswehr in May 1920 , where he served as a captain in the staff of a driver's department. When the Reichswehr was reduced to 100,000 men, he was transferred to Infantry Regiment 13 , in which he later worked as chief of the 7th Company. In 1924 he was transferred to the 5th Pioneer Battalion in Neu-Ulm as chief of the 1st Company.

Köhl had already made the acquaintance of Gotthard Sachsenberg in Flanders in 1917/18 , who had also flown as an observer during the World War and then worked with Hugo Junkers to promote the development of civil aviation. At various other meetings with Sachsenberg from 1922 onwards, the idea arose to set up the first German night flight route between Berlin and Warnemünde, for which Köhl made preparations during his summer vacation in 1924. However, the vacation was far too short to bring the project to a conclusion, so that in the following year, Junkers Luftverkehr AG Köhls was asked to continue to work on the night flight attempts on the route that has now been extended to Stockholm.

Köhl resigned from military service in April 1925 and moved to Berlin with his wife Elfriede ( Peterle ) in order to work as a night route manager for Junkers Luftverkehr AG on Tempelhofer Feld , where he established the post night flight route to Stockholm during the current year's flying season. At the beginning of 1926, after the merger of Junkers Luftverkehr and Aero Lloyd to form Luft Hansa , Köhl became their night flight manager. In the new company, Köhl often had difficulties with questions of jurisdiction, but he managed to set up the first passenger night flight route from Berlin to Königsberg. While at the beginning he had flown a lot himself and worked on improving navigation instruments, the focus of his work at Lufthansa increasingly shifted to administrative activities, which he found unsatisfactory. 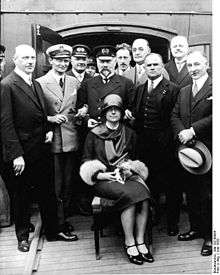 On the way back from the Atlantic flight: Hünefeld (2nd from left) and Köhl (2nd from right), in the foreground Köhl's wife

In 1927 a number of pilots tried their hand at Atlantic flights. Charles Nungesser and François Coli left Paris for New York on May 8, but never made it to their destination. Two weeks later, on May 20/21. May 1927, Charles Lindbergh made the first flight from New York to Paris. As a result, the desire to cross the Atlantic from Europe to America also matured in Köhl . Gotthard Sachsenberg, meanwhile director of the Junkerswerke, supported a corresponding project and brought Köhl into the preparations for a corresponding flight. Köhl saw aircraft of the type Junkers W 33 L as suitable aircraft for the project; Junkers factory pilot Loose had offered himself as a pilot. Ehrenfried Günther Freiherr von Hünefeld , the press officer of North German Lloyd , stood up for the financing and insurance issues .

Two Junkers W 33 aircraft were converted for long-haul flights and named after the NDL flagships Europa and Bremen . During the preparations for the transatlantic flight, the pilots Edzard and Risticz achieved a long-term flight world record of 52 hours with one of these machines. A first attempt to fly at the Atlantic with both machines on August 14, 1927 failed due to bad weather. In the Bremen there were Köhl, Loose and von Hünefeld. After this setback and the sometimes fatal outcome of similar undertakings, there was no longer any public support for another attempt to cross the Atlantic. Luft Hansa, which had previously supported Köhl's project, distanced itself from such projects, while other supporters kept a low profile in public.

Köhl and von Hünefeld were not deterred. While Köhl was working on the urgently needed improvement of the navigation instruments, Hünefeld financed another overflight attempt at private risk. In March 1928, Köhl flew an airplane of the Bremen type for eight days for six to seven hours a day in order to familiarize himself with its flight characteristics. They then flew in secret to Baldonnel in Ireland , from where an Irish team had attempted to fly over the previous year. When leaving, Köhl had given the wrong destination in Dessau in order to conceal their intention to take off from the German authorities. According to his employment contract with Luft Hansa, this ended because Hermann Köhl failed to meet his contractual obligations for a period of more than two weeks.

When sufficiently good weather was forecast for April 12, 1928, Köhl, von Hünefeld and the Irish Major James C. Fitzmaurice , commandant of the Baldonnel airfield and participant in an unsuccessful overflight attempt the previous year, took off on their flight with the Bremen the ocean. After 37 hours of flight time, Köhl landed the machine on the small island of Greenly Island just off the Canadian coast. The Bremen missed the original destination of New York by a long way because of deviations from the compass. The fuel threatened to run out and upon reaching the uninhabited, inhumane country, the planes had followed the coastline until they saw the lights of a supposedly rescuing ship, which then turned out to be the lighthouse of Greenly Island. When landing on a frozen pond, the ice broke, the plane toppled over and was slightly damaged. The planes originally planned to continue their flight to New York, but after the damage to the Bremen was repaired, its engine failed. Due to the weather, the crew's onward journey from the isolated lighthouse island took several days. Despite the high fever, the American aviation pioneer Floyd Bennett and his aviation friend Bernt Balchen wanted to come to the aid of the stranded ocean pilots, but Bennett died on the flight to Greenly Island of complications from pneumonia. After unsuccessful attempts to repair the Bremen , the ocean pilots finally took off on April 26, 1928 with Bernt Balchen in a three-engine Ford airplane from Greenly Island to Curtis Field, Long Island, New York.

In New York the crew was celebrated with a big confetti parade and Köhl received the highest American pilot award, the Distinguished Flying Cross , as well as the honorary citizenship of Chicago and St. Louis . The fliers were celebrated for weeks in the USA and Canada, and when they returned to Germany, further celebrations and honorary citizenships followed (Neu-Ulm on August 25, 1928 and Pfaffenhofen).

After his success, Hermann Köhl devoted himself to the further development of aviation. He considered refueling in the air and got in touch with Alexander Lippisch to develop a transatlantic mail plane based on the Delta 1 . After moderate results with the Delta 1, he tested a flying wing aircraft which was designed for him and Ernst von Loessl at the Weimar Engineering School.

From 1933 onwards, it became quiet in public about Köhl, as disagreements with fellow aviators from the First World War, who had meanwhile become Nazi officials, had put him on the sidelines. At the age of 50, Hermann Köhl died in Munich in 1938 of a kidney disease that he contracted during his flights. He was buried in his home village Pfaffenhofen an der Roth . 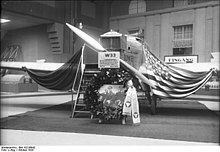 II. International Aviation Exhibition on Kaiserdamm Berlin . The Junkers plane Bremen , with which Captain Köhl, von Hünefeld and Major Fitzmaurice carried out the first east-west flight over the ocean. In front of it the decorated picture of the ocean flyer. 1928