The mulberry family (Moraceae) are a family in the order of the rose-like (Rosales). It contains 37 to 40 genera and around 1100 (up to 1400) species. Species from this family are used in different ways. Many species of Ficus and their varieties are ornamental plants . Some species produce edible fruits and many species use wood. 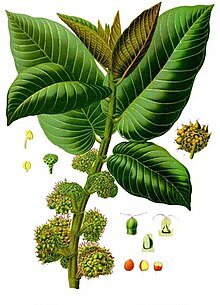 They are mostly woody, more rarely annual ( Fatoua ) to perennial ( Dorstenia ) herbaceous plants . The spectrum of life forms in the woody Arte is varied: mostly evergreen or rarely deciduous, leptokaul (plants with relatively slim, richly branched stem axis ) to pachykaul (plants with thick, non- or slightly branched stem axis), trees , shrubs , half-shrubs , lianas . Some species grow as semi-epiphytic or succulents . All species contain a white or watery milky sap (latex), in Malaisia and Fatoua it is colored. The secondary growth in thickness is based on a conventional cambium ring.

The leaves are usually alternate, namely screwy or two-lined, rarely arranged opposite to each other on the branches or stems ( phyllotaxis ). The leaves are usually clearly divided into a petiole and a leaf blade. The appearance of the leathery to herbaceous, simple leaf blades is very variable: entire, toothed or lobed. There are always stipules that either stand free or, as in the case of Ficus , are fused and protect the young leaf.

Inflorescences, blossoms, fruits and seeds as well as synecology

The species are monoecious ( monoecious ) or dioecious ( dioecious ) separately sexed. The inflorescences, which are usually formed in pairs, contain either only flowers of one or both sexes. They can be paniculate , spiky or formed as heads ; sometimes many small individual flowers are combined to form a pseudo-flower (pseudanthium) surrounded by bracts , in which they are sometimes also grown together.

In the blooms , which are always unisexual , the bloom is reduced. If there is a perianth , then it is a simple perianth with usually four or five, rarely up to eight, mostly membranous, petals.

Male flowers contain one to three (to six) free stamens . In the flower bud, the stamens are bent inwards or straight.

The bracts of female flowers are often fused with each other or with the flower base; this is interpreted as an adaptation against phytophagous insects (predators). In female flowers are one to three, usually two carpels , from constant to constant above a usually one, rarely two-chambered ovary grown. The ovules are anatropic. In every female flower there is one or usually two styles that end in a single or two-column stigma .

The pollination is carried by the wind ( anemophily ) or by insects ( Entomophilie ). The original taxa are wind pollinated. Insect-pollinated taxa emerged at least twice. The taxa with inwardly curved stamens are wind-pollinated and when the flowers are opened the stamens jump outwards and release the pollen . The taxa with straight stamens are pollinated by insects. The genus Ficus contains about 750 species, more than half of the total species of the Moraceae and is characterized by a highly specialized inflorescence ("Sykonium") and an obligate (from Latin obligare for to bind, to oblige) symbiosis ( mutualism ) with the figs that pollinate them - Wasps that originated at least 80 to 90 million years ago.

The fruits are always lonely and stone fruits or ( achenae-like ) nut fruits and, more rarely, fruits with fleshy perianth are formed, which sometimes stand together in fruit associations or cluster fruits . The seeds can contain endosperm , which can be oil-containing. The straight or curved embryo has two germ layers ( cotyledons ), but usually one is reduced. The seed, the fruit, the fruit cluster or the fruit cluster act as a diaspore .

The basic chromosome number is x = 7, 12 or 13 to many. The variation is particularly great at Dorstenia .

The fruits of many species are important food for many animal species. 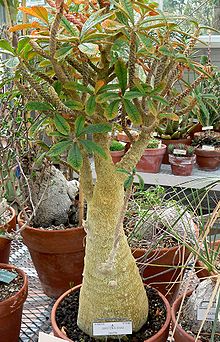 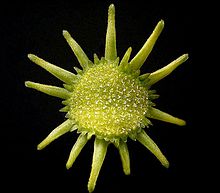 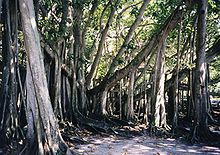 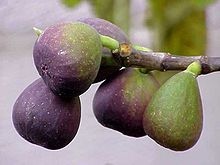 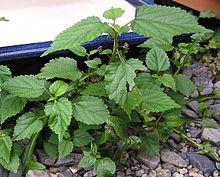 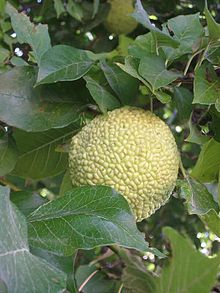 Some species ( Ficus ) and their varieties are ornamental plants for parks, gardens and spaces.

The Moraceae are found largely worldwide, with centers of biodiversity in the Old World, particularly in Asia and the islands of the Indonesian Archipelago and the Pacific.

Molecular genetic studies showed that the six or seven families of the earlier order Urticales also belong to the order Rosales . The Moraceae family is the sister group of the Urticaceae , with which it shares some flower characteristics.

According to Datwyler & Weiblen 2004, the Moraceae are divided into five tribes , particularly due to specific flower characteristics . The Moraceae family contains 37 to 40 genera with around 1100 (up to 1400) species:

As DNA analyzes of different working groups show, the genera Artocarpus , Batocarpus , Brosimum , Castilla , Streblus and Trophis are not monophyletic , since some of their species correspond to different tribes and therefore require further processing.