Member States of the European Union

Member States of the EU

The official designation for statistical measurements are:

By sorting the list according to the year of accession, the individual countries of these statistical groups can be read; for more details see EU enlargement .

* outdated data including the UK

Some areas that belong to or are administered by EU states have a special legal status vis-à-vis the European Union. In many cases these are overseas and former colonial areas.

Some EU member states have overseas territories, which, however, are fully integrated into their state structure and do not have any special role vis-à-vis the EU. They have the same status as other regions in mainland Europe. It refers to:

Some areas belong to EU member states and are also part of the EU, but do not take part in the internal market and do not belong to the customs territory of the EU, but mostly to the euro zone (marked with *)

Areas that do not belong to the EU

Some other areas are represented in foreign policy by EU member states, but do not belong to the territory of the EU and are not associated with it: 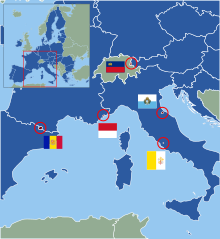 The EU maintains special and intensive relationships with the European miniature states. Each small state is fully independent , but is in a customs and currency union with a neighboring country, which itself maintains close ties to the EU, either through its own membership or through bilateral agreements . As a result, the dwarf state also benefits from the EU customs regulations , although Liechtenstein has special regulations due to the customs union with Switzerland . Apart from Liechtenstein, the dwarf states have been using the euro as their currency unit since 2002 ; Andorra , Monaco , San Marino and Vatican City have their own euro coins. Nevertheless, these states are not members of the EU: