Inscription describing Nebuchadnezzar II on an onyx stone eye of a Marduk statue.

Nebuchadnezzar's name was obviously based on the ancestor Nebuchadnezzar I and means "The god Nabū protect my first son". The first order as king comes from August 31, greg. from his accession year 605 BC His first year of reign began in 604 BC. On 1st Nisannu . In his 43rd year of reign, a document with his name was dated for the last time on the 26th Ululu (October 2nd, 562 BC greg. ) In Uruk . Nebuchadnezzar's son Amēl-Marduk succeeded him to the throne.

Nebuchadnezzar was the son of Nabopolassar . The statement by Berossus that Nebuchadnezzar married Amytis , daughter of the Medieval king Astyages , is not documented in cuneiform sources. Nebuchadnezzar had at least two brothers, Nabū-šum-lišir and Nabū-zer-ušabši. The sons are Amēl-Marduk (Nabū-šuma-ukîn), Eanna-šar-usur, Marduk-šum-usur, Marduk-nadin-aḫi, Mušezib-Marduk, Marduk-nadin-šumi and Nabonid, not including the latter son is identical to the later King Nabonidus .

The biblical information in Dan 5: 2, 11, 18, 22  EU that Bel-šarru-usur (Belšazar) was a son of Nebuchadnezzar apparently contradicts the Nabonidus Chronicle , according to which Bel-šarru-usur was the son of the later King Nabonidus. “Son” means “male descendant” in the biblical languages, including grandchildren and so on. The biblical designation “Nebuchadnezzar, father of Belšazar” is also explained by the Semitic linguistic habit of calling forefathers as fathers. So the term “son of David” is also used for a distant descendant of David. 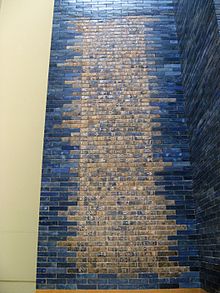 Nebuchadnezzar's building inscription on the Ishtar Gate praising its construction

Nebuchadnezzar was born by his father as early as 620 BC. Entrusted with political tasks and the command of the army. In the royal inscriptions his extensive building activity is emphasized after his official accession to the throne. So he had ziggurats , palaces, temples and fortification walls built in Borsippa , Uruk , Ur , Larsa , Sippar and Babylon . In this context, Nebuchadnezzar II mentioned newly installed God's sacrifices in the buildings that were built. The expansion of the city of Babylon is particularly highlighted. In the very detailed reports his deep religious attitude towards Marduk and Nabu becomes visible. The military expansion is described with the words:

“Far away countries, remote mountains from the upper sea to the lower sea , difficult roads, closed paths where the step becomes difficult and the step is impossible, thirsty stretches were crossed and the insubordinate were killed, enemies captured, I have guided the country right and let the people thrive "

With the conquest of the Assyrian Nineveh in 612 BC. Babylon had already experienced a large increase in territory under Nabopolassar, which posed great logistical problems for Nebuchadnezzar II . The capital, Babylon, was no longer geographically the center of the Babylonian Empire and was far removed from the newly accrued areas. Nebuchadnezzar II was able to solve most of the transport problems via the navigable Euphrates . The Levant , on the other hand, caused problems and was difficult to keep under military control.

According to tradition, Nebuchadnezzar II undertook campaigns in rebel crisis regions every year. On a six-sided clay prism, which is only partially preserved, the tribute- paying regions are named, which in the years 604 BC. BC to 595 BC Were defeated militarily by Nebuchadnezzar II: Mazamua (northeast of Arrapcha ), Ashdod , Gaza , Sidon , Tire and Arwad . The name Jerusalem is missing in this list, but this does not rule out that Jerusalem was mentioned on the missing parts. Cuneiform is 598 BC A campaign of Nebuchadnezzar in the ninth month in the province of Jechuda / Jekuda mentioned. In the following decades, Hebrew names appear in Babylonian documents. The people mentioned all came from the upper class and had greater wealth.

The biblical mention of a mass deportation and the robbery of the Jerusalem temple treasures was confirmed by archaeological writings. Archaeological investigations point to the expansion of houses of the privileged class as well as land allotments made by Nebuchadnezzar II to the poorer population. Gedaliah from Mizpah was installed as governor in Jerusalem and murdered after only seven months by Ishmael, who belonged to the army of the Davidid royal family that had just fallen. The archaeological excavations confirm that there was a well-functioning administration in Gedalya's time. A second deportation at the time of Zedekiah around 587/586 BC. BC in the course of the renewed conquest of Jerusalem is not proven by records. Whether it was the biblical Zedekiah remains unclear, since the replaced king is not named in the surviving cuneiform texts.

Initially, Nebuchadnezzar II did not have to fear military threats. The powerful Assyrian Empire had de facto ceased to exist when he took office. The post-Hittite states, the Lydians or the Urartians from Hatti ( Asia Minor ) were too weak or not expansion-oriented to endanger it. Egypt , on the other hand, repeatedly filed claims for the areas of Judea, Galilee, Samaria and Northern Syria , but could not maintain short-term successes in the long term. 605 BC With the support of the remaining Assyrians, the Egyptians suffered a heavy defeat in the battle of Carchemish . The kingdom of Elam has represented since the destruction of the capital Susa in 630 BC. No longer poses a threat through Assurbanipal .

First dangers threatened Nebuchadnezzar II from the formerly allied Medes , who are also described in Babylonian sources as Umman-Manda ("somewhere-da-land"). He therefore had a wall, the so-called Median Wall , built on the west-east route from Sippar to Opis on the Tigris . Until the end of his reign, the Medes made no territorial claims to Babylon. Further war reports up to the death of Nebuchadnezzar II are missing, which indicates a relatively safe time.

"Lion with a raised tail" , detail of the throne room facade, near the Ishtar Gate, in the Pergamon Museum , on a GDR postage stamp, 1966

Famous buildings of the time of Nebuchadnezzar II.

In the Pergamon Museum in Berlin , the Ishtar city gate can be seen today as the end of a processional street that was very large for the time , which was reconstructed using glazed original bricks. A copy of the Berlin reconstruction has also been in Babylon since the Saddam Hussein era .

"The park stretched over 120 meters on each side, and since the stairway to the garden was sloping like a slope and the individual parts of the building were separated from each other in steps, the whole looked like a theater."

Nebuchadnezzar II in the Bible

Christian representation from the 11th century on the conquest of Jerusalem by Nebuchadnezzar II ( Beatus von Urgell , illuminated apocalyptic manuscript)

The spelling Nebuchadrezar / Nebukadressar also appears in the Hebrew Bible . Nebuchadnezzar II played as a result of the conquest of Jerusalem in 597 BC. Chr. An important role in the Bible . His name is mentioned 91 times. He is portrayed on the one hand as a tyrant , on the other hand, by the prophets as an instrument of God to punish the sins of Israel.

According to Jeremiah 24.1 LUT and 29.1–2 LUT he sent the son of Jehoiakim , Jehoiachin , into exile to Babylon after the capture of Jerusalem and then set up Zedekiah as king ( Jer 37.1  LUT ). This process is supported by the archaeological find of a clay tablet that is now kept in the British Museum (see under web links).

After a breach of loyalty (oath of God) King Zedekias conquered the Babylonian army on July 23, 587 BC. Chr. Greg. ( 9th Du'uzu ) Jerusalem again. Thereupon his sons were executed in front of his eyes, he himself then blinded and led to Babylon in chains ( 2 Kings 25: 4–7  LUT ). A common punishment for breaking the oath of God was execution. However, he remained in captivity until his death ( Jer 52 : 6–11  LUT ). According to reports from rabbinical historiography, Nebuchadnezzar also brought a new wife to him during his 40-year imprisonment.

The Judeans who lived in and around Babylon assimilated into Babylonian society very quickly. So Jewish names appear relatively soon on inscriptions that prove that the Judeans were able to make a career in the court and in the military of Nebuchadnezzar. An example of what is probably a pleasant life in Babylon is provided by King Jehoiachin - the predecessor of Zedekiah. When Nebuchadnezzar died, he was given freedom by his successor Ewil-Merodach (Amel-Marduk) after about 37 years of exile. Nevertheless he stayed in Babylon and is considered to be the founder of the exile chat .

The time of the Babylonian exile under Nebuchadnezzar was extremely fruitful for Jewish theology. It needed to be explained why the temple was destroyed and the chosen people were driven from the Holy Land. The writings were re- edited and monotheism was radicalized. The first synagogues were built in Jerusalem .

In the book of Daniel , Nebuchadnezzar is one of the major protagonists in the first four chapters; as the only one who plays a role in all of them, he is clearly the main character of the fourth chapter.

This incident is assigned to Nabonidus in extra-biblical sources . (see the main article, Prayer of Nabonidus ) .

A legendary tale, which is described in the deutero-canonical book Judit , tells of a punitive expedition of Nebuchadnezzar, who here is king of Assyria , against the southern kingdom of Judah. Judith saved her hometown by pretending to be a deserter, after a feast, killing the enemy general Holofernes with his own sword and thus putting the Babylonians to flight. This legend made Judith the heroine of Israel, and in the visual arts she became the model (especially popular in the Renaissance) for dramas, operas and poetry.

Kings of the New Babylonian Empire