Robert Koldewey in 1906 while examining a find in Babylon , photographed with the self-timer

Johannes Gustav Eduard Robert Koldewey (born September 10, 1855 in Blankenburg (Harz) , Duchy of Braunschweig ; † February 4, 1925 in Berlin ) was a German architect and building researcher and one of the most important German representatives of Near Eastern archeology . Together with Wilhelm Dörpfeld , among others , he is considered the founder of modern archaeological building research .

The parents were the customs officer Hermann Koldewey and his wife Doris, née Kupfer. One uncle, Carl Koldewey (1837–1908), was a polar explorer and Admiralty Director in Hamburg . Robert Koldewey first attended grammar school in Braunschweig . In 1869 his family moved to Altona , where he came to the Christianeum as a tertian and passed his Abitur examination there in 1875; In the register of the Christianeum he left a career aspiration: construction . After a two-year apprenticeship in the construction industry ( Baueleve ), he began studying architecture, archeology and art history in Berlin, Vienna and Munich. He completed his architecture studies in 1881 with the building management exam. Following this, Koldewey worked as a government building manager for the Free and Hanseatic City of Hamburg and was probably accepted into the Hamburg Architects and Engineers Association on this occasion . Through this he came into friendly contact with Franz Andreas Meyer , the uncle of the well-known archaeologist Eduard Meyer , and with Alfred Lichtwark , the first director of the Hamburger Kunsthalle . In the years up to 1895, which were characterized by professional and financial uncertainty, both worked as supporters of Koldewey.

The Olympieion in Agrigento , reconstruction drawing by Robert Koldewey, published 1899

In 1882 and 1883 Koldewey took part in the excavations of Assos in southern Troas as a member of the excavation team of the American excavation expedition under Joseph Thacher Clarke and Francis Henry Bacon . His work there earned him a contract from the German Archaeological Institute for excavations on Lesbos in 1885 . Together with the orientalist Bernhard Moritz , he traveled to Mesopotamia in 1887 , where a preliminary investigation of the Sumerian cities of Nina (Surghul) and Lagaš (El-Hiba) was carried out. In 1889 he carried out excavations in Neandria . 1890-1891 and 1894 Koldewey participated in the excavations of the Aramaic city Sam'al ( Zincirli ) in southeastern Turkey , led by Felix von Luschan .

From January to July 1892 and from October 1893 to January 1894 he traveled together with Otto Puchstein to southern Italy and Sicily, where they measured and described the temples there. Robert Koldewey made views and schematic drawings of the temples. In 1894 he received an honorary doctorate from the University of Freiburg for his research . In 1895, Koldewey took a job as a teacher at the building trade school in Görlitz , an activity that - as his letters to Puchstein show - he did not like.

In the winter of 1897/98, Koldewey traveled with the orientalist Eduard Sachau on a pre-expedition to Mesopotamia to find suitable locations for future excavations by the German Orient Society , which was founded on January 24, 1898 . He visited u. a. Kal'at Schergât ( Aššur ), Warka ( Uruk ), Kujundschik ( Nineveh ) and Senkere ( Larsa ). Mainly because of his arguments, which he underpinned by the presentation of colored glaze bricks , Babylon (Kas'r) was chosen as the excavation site, although Assur had originally been discussed; Nineveh was eliminated because the English were already active here. The effect that Koldewey was able to achieve with the glazed relief fragments in front of the Commission of the Museums in Berlin was the decisive factor for the financing of the lavish enterprise by the German Orient Society, the Prussian State and Kaiser Wilhelm II.

On December 12, 1898, Koldewey set out on the Euphrates , and on March 26, 1899, the excavations of Babylon in what is now Iraq began . Koldewey's activities on the Euphrates, initially only planned for five years, did not end until 1917 when British troops marched into Baghdad during the First World War . In the 18 years he led the excavations of Assur, Fara ( Shuruppak ), Abu Hatab and Uruk, among others from 1903 , interrupted only by three relatively short vacation stays in Germany in 1904, 1910 and 1915.

After his return from Mesopotamia, Koldewey settled in Berlin and worked as curator for foreign affairs at the Berlin museums. In 1921 he supported colleagues in excavations in Arkona on Rügen , including Carl Schuchhardt , who later published Koldewey's letters in 1925. 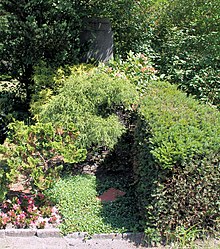 Koldewey remained unmarried and childless. He died in Berlin at the age of less than 70 after a long period of suffering due to the rigors of his excavation time in the Orient. On the Park Cemetery Lichterfelde in Steglitz-Zehlendorf his grave is (Div. 19, grave 566) serving as honorary grave of the city of Berlin was dedicated. The evidence left behind shows that Koldewey wished to have his remains immured in a reconstruction of the Ishtar Gate. After his death, the Freundeskreis ignored this wish and instead had the grave in Lichterfelde adorned with a Babylonian-style work of art: the upper part of the tombstone was designed with steps so that it resembles a ziggurat .

The archaeologist Carl Schuchhardt judged in an obituary for Koldewey that appeared in the Gnomon : “The generation of the great German excavators is dying out. They were strange and impressive figures, from Schliemann to Humann, Conze, Dörpfeld to Koldewey, because everyone had found their own way and created their own gait. Robert Koldewey should be honored among them! "

Koldewey's sketchbooks kept in Berlin show an extraordinary talent for drawing, his letters a talented scribe. The letters, like the reports, especially those of his long-time colleague Andrae, also reveal a stubborn character. Koldewey showed courage and skill not only in his work, but also in negotiating critical situations with the sheikhs .

On the other hand, he despised ignorance. In his letters, for example, he expressed himself in horror that he was believed to be believed when he dished up nonsense about Mesopotamia at the regular teachers' table in Görlitz - for example, that the oriental heat of the sun bursts the skin, which is why the Arabs always carried a needle and thread with them to sew them back together. An anecdote from Babylon is rumored by sources in which Koldewey opened a deep excavation hole as " Daniel's Lions' Den ", an excavation field as the throne room of the " Menetekels " and a cinder heap as a " fiery furnace " for a group of English tourists who are firmly rooted in the Bible . Criticized by his employees for this, he is said to have replied: “Why? Whoever believes is blessed! Should I take away their joy and let them down? That will remain the experience for you until the end of your life ! "

Robert Koldewey in the magazine of his excavation house in Babylon; photographed by Gertrude Bell , before 1917 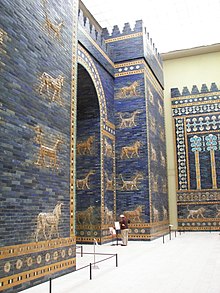 The Ishtar Gate from Babylon, in the background on the right part of the throne room facade ( Pergamon Museum , Berlin)

In the 19th century, the interest in scientific research into antiquity was primarily in the ancient sites of the Mediterranean and there primarily in their works of art and artifacts , such as statues, bronzes , paintings, coins or ceramics ; the reconstruction drawings of the temples were clearly based on the classical depictions of the 18th century. Koldewey's and Puchstein's two-volume work The Greek Temples in Lower Italy and Sicily became a standard work for the scientific investigation of the ancient Greek sites in the Magna Graecia , which is largely still valid today .

In the first half of the century, all of the research trips were still privately financed. Collections such as those of the resident of the East India Company in Baghdad, Claudius James Rich , which the British Museum acquired in 1825, had led to major English excavations in Nimrud and Ninive, among others, in the 1840s . Koldewey's special focus on the practice of archaeological excavation activities was supported not only by the German Orient Society and its well-known initiator and patron Henri James Simon , but also by the archeology enthusiast Kaiser Wilhelm II , who had drawn the Middle East into the interests of the Middle East since the 1880s German Empire.

In the course of a public debate from 1902 on the theses of Friedrich Delitzsch ( Babel-Bibel-Streit ), who, based on a comparison of the Old Testament with the cuneiform scripts, had established that the biblical writings were dependent on Babylonia, Koldeweys found their way to Berlin as early as 1900 sent reports of his excavations on the Euphrates increased attention; under the title The Rising Babylon. The previous results of the German excavations they experienced until 1925 four editions.

Robert Koldewey found the processional street of Babylon with the Ishtar Gate , the palaces of Nebuchadnezzar and the foundations of the Tower of Babel mentioned in the Old Testament and Herodotus . The latter were partially excavated under his direction. In addition, he had taken part in the excavations of the German Orient Society in Zincirli (Sam'al) and in a preliminary investigation, together with his assistant Walter Andrae , prepared the later excavations in Baalbek . The Hanging Gardens of the Semiramis (one of the wonders of the world ) believed by Koldewey to be near the Processional Street are very likely not to have been there. On the other hand, findings from more precise evaluations of the ancient texts and the too great distance from the Euphrates for irrigation speak.

Koldewey's logistics of the excavation are still considered exemplary today. His methodology supplemented the securing of the individual fragments with the systematic of an exact recording of their place of discovery within the excavation layers and thus made it possible to obtain information about the respective fate of the buildings and thus also about the history of the ancient city of Babylon. Today, science recognizes Robert Koldewey as the merit of having increased the interest of archaeological research on the Orient in the historical nature of their buildings in terms of technology, function and aesthetics. His estate is kept and researched in the Vorderasiatisches Museum zu Berlin. 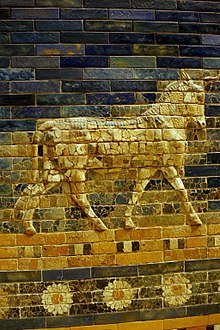 Koldewey had been sending finds to Berlin on a regular basis since 1899, but had to leave most of them behind when he left in 1917; Negotiations lasting several years, which led to a division of the find, followed. After the Kingdom of Iraq, which had been transported by the British and had existed since 1921, had released the finds that had last been awarded to the expedition, a total of 536 boxes from Babylon arrived in Berlin in 1926/27, 400 of which were glazed with those that Koldewey had collected and recorded Pieces of bricks. Walther Andrae, Koldewey's former assistant and now director of the newly founded Museum of the Middle East, had the finds evaluated and integrated into a reconstruction of the building specially designed for the museum. In 1930 the Ishtar Gate, the processional street and the throne room facade were presented in the Pergamon Museum , where they can still be viewed today. They survived the hail of bombs of World War II unscathed, while for example the market gate of Miletus in the adjoining room was badly damaged by the effects of the war.

Two wars in Iraq since the 1980s, however, have meanwhile made an assessment of Koldewey's 1917 unfinished excavation site on the Euphrates almost impossible; Reports, for example from UNESCO , allow the assumption that the excavation fields have already been irreparably destroyed.

The Koldewey Society was founded on June 25, 1926 in Bamberg , one year after Koldewey's death, on the initiative of the archaeologist and building researcher Armin von Gerkan as a working group of archaeological architects and has existed as an association for research into building history to this day.