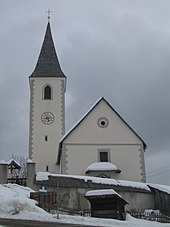 Reichenau is a municipality with 1765 inhabitants (as of January 1, 2020) in the Feldkirchen district in Carinthia .

The community is 1010  m (Gurk bei St. Margarethen) to 2334  m (summit of the Klomnock ) above sea level in the Gurktal Alps . It essentially coincides with the catchment area of ​​the upper Gurk and has a share in the north of the Turracher Höhe, known as the ski area, and the Turracher See , which Reichenau shares with the neighboring Styrian municipality of Stadl-Predlitz .

Another location is the Rotte Berg in the village of Winkl.

The main river in the municipality is the upper reaches of the Gurk , which is fed by several small tributaries.

There are several, mostly small lakes in Reichenau, of which the mountain lakes Turracher See at 1763  m and the Falkertsee at 1872  m above sea level are known as excursion destinations even beyond the municipal boundaries. The two smaller lakes Grünsee and Schwarzsee on the Turracher Höhe are on popular hiking trails.

The Gurktal Alps were uninhabited until the Bronze Age . In Eben Reichenau an old iron mine indicates a settlement in Celtic-Roman times and the river name of Gurk is reminiscent of pre-Roman settlement. At the time of the Noricum , the Gurktal was partly inhabited by Roman colonialists, but there is no evidence that they also settled in the area of ​​today's Reichenau municipality. Towards the end of the migrations at the end of the 6th century, the Celto-Romans, besieged by Slavic settlers, withdrew to more remote valleys. The ending “itz” in the place name indicates the first Slavic places, such as the Sirnitz and Flattnitz near Reichenau. The Upper Gurktal was still almost uninhabited in the 9th century, when towns like Gurk and places around Strasbourg were already mentioned along the Gurk .

Baier settlers came to Carinthia around the year 1000, and large parts of them came into the possession of churches and monasteries through donations. The ownership of the Millstatt Monastery extended to the Upper Gurktal. The first forest clearings were carried out here in the 10th, 11th and 12th centuries, and the first closed settlements emerged, including Gnesau (first mentioned in 1160).

The Lorenzenberg was developed around 1200, the previous building of today's parish church of St. Lorenzen was consecrated in 1216. The swampy valley floor was not cultivated and settled until after 1300. Reichenau was first mentioned in a document in 1332, the name suggests that the area was opened up by slash and burn (“smoking”). Various settlements can be proven for the time before; Up to 1300 there was clearing activity up to the village of Vorwald, the name of which comes from this.

The parish of Sankt Lorenzen (the highest parish in Carinthia at 1460  m above sea level , with a fortified church in the village and, somewhat remote, the Romanesque pilgrimage church of St. Anna) became independent in 1633. The tax communities Winkl-Reichenau, Ebene Reichenau, St. Margarethen and Wiedweg did not come into being until 1829. In 1849 they were initially incorporated into the Feldkirchen district, and in 1850 the community Reichenau was formed.

The Protestant church in Wiedweg was built in 1845 as a tolerance prayer house.

In 1928 a bus service was set up on the Turracher Höhe. Since then, modern tourism has developed in Reichenau.

According to the 2001 census, Reichenau had 2,029 inhabitants, 97.0% of whom were Austrian citizens. 79.9% of the population confessed to the Roman Catholic , 15.8% to the Protestant Church and 3.6% were without religious beliefs.

The upper Gurktal is crossed by the former federal highway 95, also known as Turracher Straße , in a north-south direction, which connects the Murtal in the north with the Klagenfurt basin . Between Patergassen and Wiedweg, the Kleinkirchheimer Straße B 88 branches off as a connection via Kleinkirchheim to Radenthein in a westerly direction. The L 65 leads from Ebene Reichenau via Sirnitz into the middle Gurktal ( Gurktal Straße B 93), from which the upper Gurktal is separated by the Enge Gurk , a gorge that has not been developed for road traffic . In Winkl, the Nockalmstraße branches off , which leads into Innerkrems and via the L 19 into Katschtal .

Due to the Turracher Höhe and Falkert ski areas in the municipality as well as the proximity to those in Kleinkirchheim and Hochrindl , visitor traffic plays a certain role due to the location in the Nock Mountains on the eastern edge of the Nockberge National Park , whose administration is based in the village of Ebene Reichenau summer tourism. There are also no significant commercial enterprises.

The Reichenau coat of arms, which was awarded to the municipality on January 20, 1986 by the Carinthian provincial government, clearly combines elements of cultural history and the natural area: It shows the church of St. Lorenzen, consecrated in 1216 and thus the oldest church in the municipality, as well as on the rear half of the shield with the stemless gentian ( Gentiana acaulis ) a plant typical of the alpine landscape of the Nock region (which is expressed in the shield by the green mountain).

The official blazon of the coat of arms reads:

"Above a green mountain split by red and silver, on the right on the mountain behind a silver, black-roofed wall rising to the left, a silver, black-covered and black-open Gothic church with a tower reaching under the main edge, on the left a stemless church growing out of three green leaves Gentian floating with a silver stamp. "

The flag is red and white with an incorporated coat of arms.

Cities and municipalities in the Feldkirchen district