Ring of Fire is a country - song from 1963, that of June Carter and Merle Kilgore was written. The piece was Johnny Cash's biggest hit on the country charts and became one of the most popular titles in the genre . 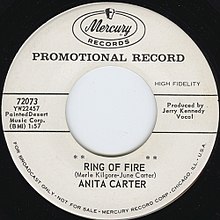 When June Carter went on tour with Johnny Cash in November 1962, Merle Kilgore also took part. During the tour, they wrote new songs in their free time. Probably in a volume of poetry Carter found the passage "Love is like a burning ring of fire". Together with Kilgore, she began to incorporate this line into a new song, which they initially called Love's Fiery Ring . Her sister Anita Carter was in the recording studio at the time to record an LP. To complete it, she was missing a song that she asked June Carter to do. It took Carter and Kilgore little time to complete the fragment. The text of the chorus is:

Ring of Fire did not want to name the song Kilgore, because he knew that Duane Eddy had used this title in May 1961 for a composition of his own. Therefore, he initially varied it to (Love's) Ring of Fire . Under this title, the composition was the first piece on the LP Sings Folk Songs Old and New, recorded by Anita Carter in November 1962, produced by Jerry Kennedy and published in February 1963 . The single released from this was titled Ring of Fire / Voice of the Bayou (Mercury 72073) and was also released in February 1963.

The version of Johnny Cash 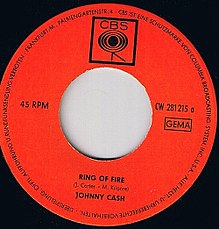 Johnny Cash was in dire need of a hit as he hadn't had a single on the pop charts in nearly four years. He was also under contractual pressure, because his record deal with CBS Records was limited to the end of 1963. Cash wanted to record Ring of Fire badly, but had difficulties in the studio to record the song with the trumpets he wanted. His longtime companion Jack Clement was asked, but he was skeptical: “Columbia won't even let me near Johnny Cash. Producer Don Law protects him with an iron hand. ”At Cash's request, Clement traveled to the recording studio in Nashville for the March 25, 1963 recording date .

The single Ring of Fire / I'd Still Be There (Columbia 42788) was released on April 19, 1963 and hit the country charts on June 8, 1963, where it reached first place on July 27, 1963 and there for seven Weeks stayed. The single sold over a million copies, and the digital version of the song has been downloaded more than 1.2 million times. The title also took 17th place in the US pop charts in the version of Cash .

In addition to I Walk the Line , Ring of Fire developed into Cash's signature melody. The song ranks 87th on Rolling Stone magazine's list of the 500 best songs of all time and was voted number 4 of the 100 Greatest Songs in Country Music by CMT .

With 91 versions registered with BMI , Ring of Fire is one of the songs that are often covered on average and received a BMI award. Ralf Bendix came onto the market in November 1963 with a German version and a text by Carl-Ulrich Blecher under the title Der Große Treck nach Idaho (number 27 in the German charts), also with mariachi trumpets (Electrola 22478).

The version published by Howard Carpendale under the title Hot Like Fire (December 1971) (ranked 35 in Germany) was based on another German text, also by Blecher; the girls' quartet Les Gam’s came onto the market with a French version under the title L'anneau de feu (1964). Joaquin Phoenix sang the piece in Walk the Line , the biographical adaptation of Cash's life in 2005 . In 2006 the English soccer club FC Liverpool brought out a cover version for the FA Cup final , the proceeds of which went to charity.

In 2004, the copyright holders objected to the use of the song to advertise hemorrhoidal ointment . The planned use of the line “And it burns, burns, burns, the ring of fire, the ring of fire” was viewed by the Cash heirs as a disparagement of the song, as it dealt with the “transformative power of love”. Co-writer Kilgore said in an interview that he often joked about hemorrhoids himself when the song was played.