Aschbach Castle , also Baron v. Called Pölnitzsches Schloss , it is a baroque castle of the Pölnitz family in Aschbach , a district of the Upper Franconian town of Schlüsselfeld . The facility comprises a building complex with courtyards, residential buildings, stables and barns . The castle, its park and some outbuildings are under monument protection .

Aschbach Castle is located west of the Schlüsselfelder district of Aschbach on a slope about 10 meters above the town on the road to Burgwindheim (BA 20). Even if there are some green spaces behind the castle up the slope , the actual, approximately 5  ha large castle park is located down the slope across the street to the village. The palace and park are privately owned and cannot be visited. 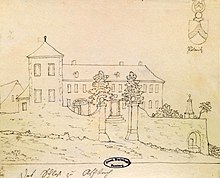 A castle that was owned by a branch of the Pölnitz family stood at the current location before the Thirty Years War . It burned out completely during the war. General Hieronymus Christoph von Pölnitz , who was elevated to the status of a baron by Emperor Leopold I in 1670 , acquired the site from another branch of the family in 1652 and had the castle rebuilt in its current form between 1677 and 1697 using the foundations and walls that had remained standing. Under Marquard Karl Christoph Freiherr von Pölnitz, knight captain of the canton Steigerwald , the baroque interior was designed in the early 18th century. Major renovations took place from 1896 to 1904, and another renovation was carried out in 1976.

During the Second World War , paintings and other art objects from various museums were stored in Aschbach Castle, for example from Kassel and Bamberg, including works from the Hildebrand Gurlitt Collection , which later became known as the Schwabinger Kunstfund . After the Second World War, the castle served as a DP camp for the temporary accommodation of Jewish Poles who wanted to emigrate to Israel and who received training in agriculture and dairy farming in preparation for their future tasks in the kibbutz . In 1948 the camp was closed and the castle returned to the Pölnitz family.

Since the 1980s Nicolaus von Pölnitz has been breeding falcons on a large scale on the grounds of the castle , which he trained for hunting and sold to falconers , especially in Arab countries. In 2003 he kept 80 old falcons with which he bred 90 young falcons. Since he also at Falcon breeding gyrfalcon with Saker crossed, it came in 2010 at a trial for the 2005 revised bundesartenschutzverordnung that indigenous species to protect the holding of such birds of prey hybrids bans. The question of whether saker falcons are still a species native to Germany, however, no longer had to be clarified due to the death of the animals in question, and the proceedings were discontinued.

South of the baroque garden is the so-called Dorfsee ( Lage ), a pond with an artificial round island. A park laid out in the 19th century extends northwest of the Baroque garden ( Lage ).

The palace and palace park are entered separately as architectural monuments in the Bavarian list of monuments. The monument “Freiherrlich v. Pölnitzsches Schloss ”includes the actual castle building and its furnishings, as well as the outbuildings, the fountain in the front courtyard and the courtyard wall with portal. The monument “Freiherrlich v. Pölnitzscher Schlosspark ”include the baroque garden with entrance gate, garden pavilion and gardener's house with barn, the village lake with the artificial round island and the 19th century park.

Due to archaeological findings in the area of ​​the castle from a presumably medieval to early modern predecessor building, the grounds of the palace and the baroque palace garden are also entered as a ground monument in the Bavarian list of monuments

Castles and palaces in the Bamberg district