Stewart Grand Prix was a British motorsport team that competed in the Formula 1 World Championship from the 1997 season to the 1999 season .

The team was founded in 1996 by former Formula 1 world champion Jackie Stewart and his son Paul and emerged from the Paul Stewart Racing Team , which had competed in the British Formula 3 championship since 1989 . After initially mediocre results, Stewart had become the top team in the racing series: In vehicles used by Stewart, Gil de Ferran (1992), Kelvin Burt (1993), Jan Magnussen (1994), Ralph Firman (1996), Jonny Kane (1997 ) and Mário Haberfeld (1998) win the championships partly in a dominant way. In addition, the future Formula 1 drivers David Coulthard (1991), Luciano Burti (1998-1999) and Narain Karthikeyan (2000) drove for the team, which withdrew from Formula 3 after the 2000 season.

Stewart Grand Prix achieved one win in 49 Grand Prix starts ( Johnny Herbert at the European Grand Prix at the Nürburgring 1999), one pole position ( Rubens Barrichello at the French Grand Prix in Magny-Cours 1999) and a total of 47 World Championship Points.

In 1997 the team took part in the World Championship with the Stewart SF01 , which was powered by a Ford Zetec-R 3.0 V10 . Rubens Barrichello and the inexperienced Jan Magnussen were signed up as drivers . The first season was not very successful. The car would have been competitive, but the reliability in particular caused problems. Nevertheless, Rubens Barrichello achieved a surprising second place at the Monaco Grand Prix . However, the race was marked by rain and various failures. The rain in particular favored vehicles fitted with Bridgestone rain tires (and thus Stewart as well), as they performed better than the competition's Goodyear rain tires under the prevailing conditions . The six points gained by finishing second should remain the only points of the season. Stewart finished ninth in the constructors' championship.

In the second season, the Stewart SF2 was used. At the beginning, Barrichello and Magnussen were again active as drivers. After the seventh race, however, Magnussen was replaced by Jos Verstappen . The 1998 season was just as disappointing as the previous year. Ultimately, Barrichello and Magnussen were only able to get into the points three times (two fifth places and one sixth place), Verstappen didn't get any points. With a total of five points, the team ended up in eighth place. The reliability of the car continued to be a major problem.

1999: The only victory and the quick end 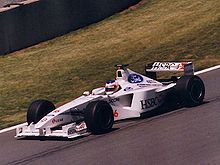 In addition to Rubens Barrichello, who remained loyal to the team, Johnny Herbert, a very experienced pilot, was used for the 1999 season. They drove the Stewart SF3 , which was no longer equipped with the old Ford Zetec R engine, but now had a Cosworth CR-1 3.0 V10 in the rear.

The car was now much more reliable and also competitive in terms of performance. As a result, the driver duo was able to regularly finish in the points. In the third race, the 1999 San Marino Grand Prix , Barrichello achieved the team's first podium finish with third place. He was able to repeat this result twice (at the French Grand Prix and the European Grand Prix). In France he also managed to secure the team's first pole position. A negative point, however, was his disqualification at the Spanish Grand Prix due to a non-compliant sub-floor.

His team-mate Johnny Herbert could not quite build on these performances, but still scored points a few times. At the chaotic Grand Prix of Europe, however, he was able to benefit best from the numerous failures of the competition and took the first and only victory in team history. For him personally it was the third and last victory in his career.

With a total of 36 points, four podium finishes and one victory, the team finished fourth in the constructors' championship.

In the course of 1999, Stewart Grand Prix was completely taken over by the US automobile company Ford , which had previously supported it as an engine supplier. From the 2000 season , the racing team started under the name Jaguar Racing . The racing team has been called Red Bull Racing since 2005 after it was bought by the Austrian beverage manufacturer Red Bull GmbH .

All Stewart drivers in Formula 1