Expansion of the alpine glaciation during the Würm glaciation. Blue: the edge of the ice from earlier cold ages

The Würm Ice Age , also known as Würm Glacial , Würm Ice Age or Würm Age , is the name of the last ice age in the Alpine region . It is the most recent of the large-scale glaciations that have occurred in the Alpine region and that extended beyond the Alps themselves. Like most of the other cold ages of the Pleistocene , it is named after a river, namely the Würm in Bavaria , a tributary of the Amper . The Würm glacial period can be dated from about 115,000 to 10,000 years ago, although the information differs depending on how the long transition phases between glacials and interglacials ( warm periods ) are assigned to one or the other period. The annual mean temperatures during the Würm glacial period in the Alpine foothills were below −3 ° C (today +7 ° C). This was determined by changes in the vegetation ( pollen analysis ) and facies differentiation .

The simultaneous glacial period in Northern and Central Europe is known as the Vistula glacial period . Despite the global climate fluctuations, the cause of the large icing cycles, the dating of the alpine glacier advances does not automatically correlate with the furthest extent of the Scandinavian ice sheet . In North America, the corresponding “last glacial period” is known as the Wisconsin Glaciation . 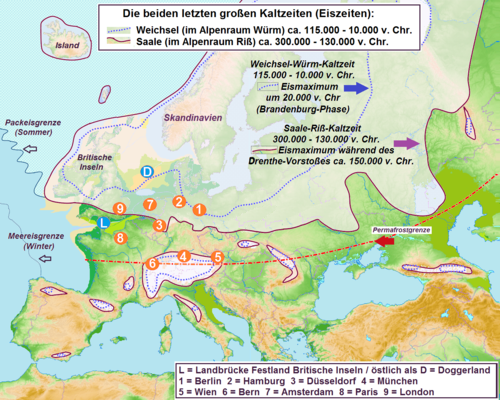 Würm ice age (in the north: Vistula) compared to the Riss ice age (in the north: Saale). The glacier advances were interrupted by warmer periods, during which the archaic people of Europe (the Neanderthals as the successors of Homo heidelbergensis ) spread away from the mountain areas and beyond the permafrost limit to the north and northeast. From around 40,000 BC. The modern Cro-Magnon humans colonized these areas. 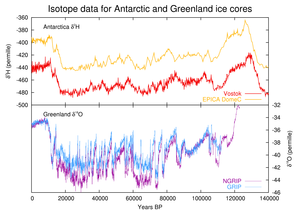 Gravel plains and moraine landscape in the Westallgäu near Leutkirch , Zeil Castle on the left

In the Gelasium , i.e. at the beginning of the Quaternary around 2.6 million years ago, an ice age began in the northern hemisphere that continues to this day. The icing of the polar ice caps is characteristic of such an ice age . The Gelasian was followed by the Old, Middle and Young Pleistocene, with several warm and cold periods staggered in time. The latter are often also called "Ice Ages" or "Glacials", whereby the term Ice Age is often confused with the generic term Ice Age. The warm periods are referred to as "interglacial". The glaciers repeatedly emerged from the Alps onto the northern Molasse foothills, leaving behind moraines and meltwater deposits of up to several hundred meters in thickness. Today the Pleistocene in the Alps is divided into the phases of the Biber , Danube , Günz , Haslach , Mindel , Riss and Würm glacials . In the Riss glaciation (see also the Saale glaciation in Northern Europe) the furthest ice advance into the Alpine foothills took place . The most recent foreland glaciation, the Würm glacial period, did not show such a large and closed front of glaciation. Nevertheless, their terminal moraine lines protrude far into the foreland as individual praises that correspond to the glacier tongues. If they were still restricted by the valley flanks in the high mountains, the flowing glacier masses in the foreland could often unite to form huge glaciers.

The moraines and gravel areas formed in the Würm glacial period are best preserved, as no similar geological processes have followed since then. The ice age traces were not carved out by other glaciers or covered by their sediments. This allows a more precise dating for the Würm glacial period than for the previous glacial stages.

The Würm Ice Age was preceded by the Eem Warm Age, which began around 126,000 years ago and lasted 11,000 years. Then there was a significant cooling, which is, however, characterized by occasional fluctuations in the average temperatures by several degrees Celsius. The various advances and retreats of the glaciers associated with these temperature fluctuations are called “stadials” with rather low temperatures and “interstadials” with higher temperatures.

The Würm glacial ended around 10,000 years ago with the beginning of the Holocene . The cold period was followed by another warming, which continues to this day and in which the glaciers recede. Nevertheless, there were also temperature fluctuations and ice advances in the Holocene, the last time in the modern so-called Little Ice Age . The Holocene is considered to be the “interglacial” of the Ice Age, as the poles and the high mountain ranges are still glaciated.

For the stratigraphic chronology compare the “sister article” Vistula Glaciation .

During the Würm glacial period, various advances and retreats of the glaciers can be documented. This led to a staggered arrangement of the individual terminal moraine walls and crests. In the valleys, gravel collected to form low terraces, which today's rivers cut only a little.

The westernmost würmzeitliche glacier was still in the Swiss canton of Valais existing Rhone Glacier . One of its glacier tongues formed today's lakes Biel and Neuchâtel . The Rhone Glacier covered the entire Swiss plateau and reached into the area of ​​today's Solothurn . In the Bern region it united with the Aare glacier .

The Rhine glacier , which protrudes from the alpine Rhine valley , reached Schaffhausen on its extreme foray . Today's Lake Constance lies in its tongue basin , which has been eroded by fluvioglacials and can therefore be described as worm glacial . Smaller praises of the Iller and Lech glaciers followed further east . Its low terrace gravel has a large extension up to the Danube .

It joined the Isar-Loisach Glacier to the east and formed the glacier tongues of Tölz , Wolfratshauser See , Starnberger See and Ammersee . The Ammersee and Starnberger See can still be found in its tongue basin. As the ice melted, the tongue basins gradually became ice-free from north to south and filled with melt water. Thus a lake landscape was created. This lake landscape was immediately replenished with lake clay and delta gravel. The Starnberger See has survived to this day without an inflow, while the Ammersee has already been half filled. The existence of the Wolfratshausen lake was particularly short ; it was quickly backfilled by the Isar and Loisach. The filling of the basin does not depend so much on the size of the flowing channel as on its debris. The grain sizes (suspended matter) are of great importance. For this reason, it is not surprising that most of the lake basins that have not yet silted up are located in limestone alpine areas. Upper rivers carry less suspended matter than those from crystalline areas. The outermost edges of the ice streams should also be mentioned:

The lower terrace of the Munich gravel plain, which descends by 300 meters from south to north and is correspondingly less thick, is assigned to Würm glaciers. In its northern part, peri- and post-glacial groundwater outflows resulted in large spring moor formations such as the Dachauer Moos and the Erdinger Moos .

To the east of the moraine foothills of the Inn Glacier , which protrude far to the north , smaller ones of the Chiemseegletscher connect . The terminal moraines of the Inn Glacier can be found near Haag in Upper Bavaria . A large ice reservoir formed around Rosenheim in the late glacial, the Rosenheim Basin with over 150 meters thick sediments . Today's Chiemsee also represents a remaining meltwater lake in the southern part.

The easternmost of the large Würm Cold Age glaciers that protruded into the foreland was the Salzach Glacier with several terminal moraine echelons . The center of the ice advances was a glacier basin near Salzburg, from which several small ice advances branched off. After the Würm glacial period, the Salzburg basin was filled by a lake that later silted up, as were the smaller branch basins, in which small lakes and moors have survived even today.

Immediately east of the Salzach Glacier were three smaller glaciers that reached the foreland. Their main pools are Mondsee , Attersee and Traunsee . Glaciers further to the east were limited to the Alps, the eastern end of the glaciation lay on the line Völkermarkt - Judenburg - Admont . Isolated glaciers lay on the massifs of the Hochschwab , the Dürrenstein and the Rax around Mariazell . The Klagenfurt basin was completely occupied by a large glacier up to Völkermarkt. The Karawanken and Triglav as well as the Carnic Alps in the west were completely frozen. A glacier flowed from the Carnic Alps south of the Trogkofel to the area of ​​today's Gemona .

In Italy, several glaciers were concentrated around Lake Garda , which is the main basin of the glacier that has advanced furthest south of it. Another glacier lay in the area between Lake Como and Lake Maggiore ; and to the west glaciers reached the Po plain around Ivrea and west of Turin . 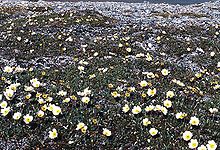 The development of vegetation since the maximum of the Würm cold period is of great importance. At this stage in the ice-free north-western ruled Europe a subarctic tundra vegetation , consisting of heather greenhouse -poor dwarf shrub companies ( Betula nana , Salix polaris consisted among others) and an arctic-alpine Steinschutt- and grass vegetation, which had a large proportion of species because of the mild summer temperatures today do not cross the polar or alpine tree line.

A total of over 330 clans have been identified in this area . The unglaciated area of ​​Central Europe between the Nordic inland ice and the glaciated Alps was populated by treeless tundra vegetation with a higher proportion of steppe plants ( Artemisia , Chenopodiaceae , Poaceae ), the remains of which have often been preserved in the clayey sediments of lakes. According to the main species - the arctic-alpine silver arum ( Dryas octopetala ), these fossil flora are called Dryas flora.

Species identification, v. a. in the genus Artemisia , which includes steppe and semi-desert species , are not yet numerous. The vegetation in the low mountain ranges of Europe, the northern foothills of the Alps, on the heights of the mountains only covered by smaller glaciers and in northeastern Europe consisted of snow-soil and solifluction societies.

During the period of maximum ice expansion, southern Europe was largely forestless, with widely scattered, isolated woody occurrences in favored habitats . The Mediterranean and sub-Mediterranean steppes dominated with numerous islands of open tree groves . The pollen values of Artemisia , Chenopodiaceaen , Poaceaen and of Ephedra are relatively high. According to this, large parts of southern and south-eastern Europe that lay outside the permafrost limit were probably dominated by Artemisia steppes. At higher altitudes in the mountains there were probably alpine - arid societies. Forest islands isolated from each other are also suspected in the submontane heights of the south and south-east European mountains, particularly on the south-west and south edges of the Alps, in the Balkans , on the south edge of the Carpathian Mountains and in southern Greece, as well as in damp river plains (gallery and fringing forests). These areas were evidently persistence areas for most of today's European trees.

In the fern plants z. For example, the original diploid Asplenium species are still restricted to the cold-age retreats in the Mediterranean basin, while the polyploid clans conquered the rest of Europe after the cold (ice) period.

The cold and warm periods of the Quaternary of the Alps