The Egyptology explores all aspects of ancient Egyptian civilization (everyday life, language and literature, history, religion , culture and art , economics, law, ethics and spiritual life) from the history v of the 5th millennium. BC (for example the Negade and Badari cultures ) until the end of Roman rule in the 4th century AD. It is very language-oriented in Germany , while in the Anglo-American and in other countries such as France, Italy, Poland and the Netherlands also the archeology itself occupies a large space within teaching and the subject. 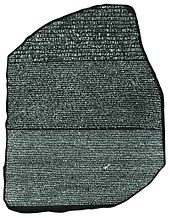 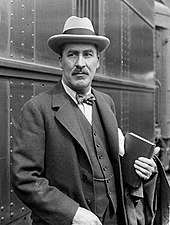 The scholar Athanasius Kircher (1601–1680) studied the Egyptian monuments and was interested in the Egyptian language . After learning Coptic , he took the first steps on the way to deciphering the hieroglyphs .

Napoleon was accompanied by many scientists on his campaign to Egypt (1798–1801). The results have been published since 1809 in the extensive text and image collection Description de l'Égypte . In 1822 Jean-François Champollion published a complete system for deciphering the hieroglyphs, based on his work on the translation of the Rosetta Stone . This was the hour of birth of modern Egyptology, because only with knowledge of the ancient Egyptian script and language was it possible to gain an insight into the ancient Egyptian culture and to understand it.

The Egyptomania of the European elites in the 19th century also played an important role . It was considered good form to finance an excavation, take part in it yourself, or at least take a trip to Egypt and bring art objects with you. The souvenirs often included mummies , which were then unwrapped as a highlight at an evening party. While this group provided the funding and made amateurish excavation attempts (gentleman archaeologists), the scientific work was in the hands of a few. There was no special training in dealing with ancient finds, their documentation and conservation at that time. The men were self-taught or trained by a more experienced researcher by working with them for some time.

Some early researchers did particularly well, including Flinders Petrie . He excavated several temples and conscientiously drew the hieroglyphs that were incomprehensible to him, e.g. B. in Amarna . In addition, in 1898 he used the recently discovered X-rays to x-ray the mummy of Ramses II . He demonstrated the subsequent stuffing of a mummy (a seed in the nose to recreate the characteristic hump after drying out). It is through this first use of X-rays that his name is also linked to paleopathology . Petrie is considered the "instructor" of Howard Carter , who gained his first archaeological experience in an excavation led by Petrie. Carter discovered Tutankhamun's tomb in 1922 . This magnificent find was thanks to the patronage of Lord Carnarvon .

In Germany, Richard Lepsius is considered the founder of Egyptology. He was the first German who carried out excavations in Egypt and documented numerous monuments, even those lost today, in the course of his expedition. In research at this time, philology was in the foreground. Accordingly, Egyptology in Germany in the following years was primarily a linguistics and, to a lesser extent, an art history subject. In this context, the creation of a comprehensive ancient Egyptian dictionary at the Berlin Academy should also be mentioned, which was created through international cooperation.

With Ludwig Borchardt , projects began in Egypt with the aim of excavating larger objects. Borchardt had studied architecture and so building research came to the fore. During his excavations, the architecture of buildings was documented in an exemplary manner, while small finds played only an insignificant role. It was not until the excavations of the sun sanctuary of Userkaf near Abu Gorab in the years after the Second World War that small finds such as B. ceramics or seal impressions, adequately documented. The great importance of philology and building research are still predominant in German Egyptology today.

Egyptology is taught at several universities in Germany .

At the beginning of National Socialism, in 1933, there were Egyptologists who were or were classified as Jews and were removed from their positions in universities and museums. These included Ludwig Borchardt and Georg Steindorff ; the latter emigrated to the USA. Bernhard von Bothmer , who had initially worked in the Berlin Museum, emigrated to the USA as an opponent of the Nazi dictatorship. He found employment at the Brooklyn Museum in 1956 . Other Egyptologists such as Rudolf Anthes stayed in Germany, but were opponents of the regime, while others supported the Nazi regime and made a career in it.

The following people can be considered opponents of the new regime:

The following Egyptologists can be called supporters of the regime:

As early as the first half of the 19th century, there were numerous travelers in Egypt who copied monuments. Systematic excavations only began at the end of the 19th century. During this time, Egypt came under the influence of the colonial power Great Britain. At the end of the 19th century, Flinders Petrie deserves particular mention, who also received the first chair in Egyptology at University College London . Flinders Petrie can be called the founder of archeology in Egyptology. He not only documented architecture and works of art, but also small finds and above all ceramics. This tradition continued in the first half of the 20th century. With the excavations of Reginald Engelbach and Guy Brunton , ceramic corpora were created for almost all epochs of ancient Egyptian history. The relatively quick publication of these excavations is remarkable. The grave of Tutankhamun in 1922 by Howard Carter , a former student Petrie found. The grave and its finds were completely recorded, but no publication came about during Howard Carter's lifetime. The philology was expanded at the end of the 19th century by Francis Llewellyn Griffith , who was also the first professor of Egyptology at Oxford. The great weight of archeology is still decisive in British Egyptology today.

Egyptologists study the legacy of ancient Egyptian culture from its beginnings around 3200 BC. Until the first centuries AD. Traces of this culture can be found above all in the Nile valley from the Mediterranean Sea to Khartoum in today's Sudan and from the Libyan desert in the west to the Middle East in the east as well as in the entire Mediterranean area. The basis of Egyptology is the mastery of the ancient Egyptian scripts and languages, because there are texts in hieroglyphics , hieratic , demotic and coptic . Hieroglyphs and hieratic are fonts in which the language levels Ancient Egyptian, Middle Egyptian (or “Classical Egyptian”) and New Egyptian have been handed down, with hieroglyphs also the so-called “Ptolemaic Egyptian”, which is characterized by a large number of new characters. Demotic and Coptic are further language levels that are characterized by their own scripts. The texts that have been preserved come from many areas of life. So there are graves, steles - or statue inscriptions, texts on rituals , festive calendar, hymns and religious texts. v. m., which are often carved in stone. There are also literary narratives and life lessons, which are mainly written on papyrus and limestone shards. Contracts, receipts, letters, notes, lists, manuals, court records and the like give information about the civil service in ancient Egypt. a. m. Information desk.

The starting point of university teaching is teaching the language and reading the texts; cultural-historical and archaeological topics form further areas. The priorities depend on the respective specialist representatives. Egyptology is currently taught at 16 German universities, in Europe, America, China and Japan, Australia and other countries and of course in Egypt. The field of activity of today's Egyptologist is not necessarily in the field , but they also work in pure Egyptian museums or museums with Egyptian departments, prepare special exhibitions, have a teaching position at universities or are active in adult education. The Cairo Department of the German Archaeological Institute (DAI) and the Dutch-Flemish Institute in Cairo (NVIC) are located in Egypt itself, along with other international institutions. From there, as well as from various university projects, field work is carried out in Egypt.

In terms of content and subject, Egyptology overlaps in certain parts with the subjects “Prehistory”, “Ancient History”, “Archeology of the Middle East” or “Biblical Archeology”, in part “Classical Archeology” (depending on the focus of the university) and , in a broader sense, Christian theology . The records of the early churches in Egypt are all preserved in Coptic .

A prerequisite for studying in Germany is proof of proficiency in English and French, although Italian is also very helpful for library work. In addition, ancient Greek is required in many places .

Many of the numerous ancient Egyptian sources on site and in museums around the world are still unedited or unpublished. In Egypt, the most important thing is to uncover monuments or settlement structures, cemeteries, etc., to document them scientifically and to protect them from further destruction. Due to the different types of sources, the collaboration of Egyptology with other disciplines has always been crucial. In recent times, the Egyptological institutes / seminars have also been increasingly integrated into larger units at the administrative level. In many places Egyptology also works in inter- or transdisciplinary research networks. Although the most comprehensive possible view of all sources is necessary for understanding ancient Egyptian culture, special specializations have emerged in research: Egyptian philology (in addition to the central language levels Ancient, Middle and New Egyptian, especially Ptolemaic studies , demotics and coptology ), religion, Literature, the various areas of material culture, architecture, sculptures, ancient Egyptian mathematics , pharmacy and medicine , legal history, music history and others.

The previous study of Egyptology as a major or minor subject with the degree Magister artium has been replaced by the new Bachelor programs with subsequent Master , whereby in many places certain combinations with other disciplines became necessary (e.g. with African Studies , Ancient Oriental Studies , etc.). In German university policy, Egyptology is classified as a minor subject .

Portal: Egyptology  - Overview of Wikipedia content on the subject of Egyptology