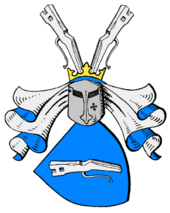 Arms of the von Bennigsen family

Bennigsen (also Benningsen or Bendisen ) is the name of an old noble family from Lower Saxony . The lords of Bennigsen belong to the Calenberg nobility and are of the same tribe and coat of arms as those of Jeinsen . Branches of the family still exist today.

Relationship is to the letter noble family of Bennigsen that the Prussian captain Gustav Bennigsen back. He was a natural son of lieutenant Rudolf von Bennigsen († 1800) from the Elector of Brunswick-Lüneburg to Bennigsen and Arnum and Sophia Rother and received the nobility through Prussian nobility legitimation on November 27, 1819.

The family first appeared on June 24, 1311 with the brothers Burchhardus and Helmicus de Bennekessen in Pattensen . The trunk series begins with ashes from Bennekessen (* before 1440; † around 1502). The eponymous seat of Bennigsen , today a village in the town of Springe in the Hanover region , was given as a fief by the Count of Schaumburg, who died out in 1640 . The manor Bennigsen is still owned by descendants, however, now an adopted family (lamp), while the name of Bennigsen adopted, but needle legally not the noble v. Bennigsen heard.

The Benningsen are of a tribe with the extinct noble families of Crimpe and the von Jeinsen , who until the 15th century had the same coat of arms , with the sloping crossbow shaft . The oldest documented common ancestor was Burchard von Crimpe , who appeared in 1261 as the Graflich -Schaumburg Burgmann in Stadthagen .

Coat of arms above the portal to the Bennigsen manor

In addition to their possessions in the Calenberger Land , members of the family were able to acquire other goods in the diocese of Minden and Hildesheim at an early stage ; so among others Banteln , Gronau and Dötzum (today a district of Gronau). Later branches also became property in Magdeburg and Lower Lusatia . In 1618 the Bennigsen split into the older line to Banteln and the younger line to Bennigsen.

Several members of the Bennigsen line have recently been in royal Prussian court, military and administrative services. August Christian von Bennigsen (* 1765), Prussian staff officer, retired to his ancestral estate after the Peace of Tilsiter . In 1813 he and General von Dörnberg gathered new troops with whom he joined the German Legion as a brigadier and lieutenant colonel . He died on September 1, 1815 while bathing in Ostend . His descendants later served as officers in the Prussian army . Rudolf von Bennigsen (1824–1902), who came from this line, was an important German politician. He was a co-founder of the German National Association and the National Liberal Party . From 1873 to 1879 he was President of the Prussian House of Representatives and later President of the Province of Hanover .

The Imperial Russian General of the Cavalry Levin August von Bennigsen (1745-1826), son of Levin Friedrich von Bennigsen, lord of Banteln and Völksen and ducal colonel of Brunswick, and Henriette von Rauchhaupt came from the line of Banteln . During the Wars of Liberation he was General en Chief and Commanding General of the Polish Army. A son from his fourth marriage was Alexander Levin Graf von Bennigsen (1809-1893), who was commissioned by King Ernst August of Hanover in 1848 to set up a ministry and in this took over the ministry of foreign affairs .

In the Kingdom of Hanover , the family belonged to the knightly nobility. In August 1911, the family celebrated the 600th anniversary of the building of their ancestral castle. 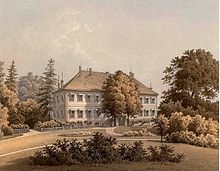 Karl von Foerder (also Förder ), husband of Helene Elenore von Foerder, née von Eldith, died on February 21, 1790. With his death, the tribe of the family that had been wealthy in the Archdiocese of Magdeburg since the middle of the 16th century died out . His widow, Helene Elenore von Foerder, adopted a son of the Chancellor of Merseburg , Gustav Rudolph von Bennigsen, from the Bennigsen line, who received royal Prussian approval on August 25, 1795 for the association of names and coats of arms with the dead von Foerder family. He founded the Bennigsen-Foerder line.

After the death of Helene Elenore von Foerder, with which the name von Foerder also became completely extinct, the goods Isterbies , (today part of Möckern ), and Pöthen, (today part of Gommern ) in the then district of Jerichow , fell to her adoptive son. Gustav Rudolph von Bennigsen-Foerder became a royal Prussian district administrator in 1809 and left two sons and a daughter. One son later became mayor of Salzwedel .

The Imperial Russian cavalry general Levin August von Bennigsen was given the status of a Russian count by Tsar Alexander I on October 19, 1813 on the battlefield of the Battle of Leipzig . He established the count's line.

Coat of arms of the von Bennigsen-Foerder

Elements from the coat of arms of the von Bennigsen family still appear in the local coats of arms of Banteln and Bennigsen :