Butyric acid is the common name of butanoic acid , a carboxylic acid and at the same time the simplest fatty acid . It occurs naturally through butyric acid fermentation . Their vapors irritate the eyes and the respiratory tract. The salts (see below) and esters (see butyric acid esters ) of butyric acid are called butyrates (systematically also butanoates ). Its isomer is isobutyric acid .

Butyric acid was discovered in 1814 by Eugène Chevreul among the saponification products of butter and was carefully described. The origin of the butter fat and the smell of butter (Latin butyrum ) led to the name of the acid . Théophile-Jules Pelouze described them and their reactions in more detail in 1843, naming the following properties:

“Butyric acid is a completely colorless liquid , transparent, highly mobile, it has a smell that is reminiscent of acetic acid and strong butter . It is soluble in all proportions, in water, alcohol and wood spirit . At ordinary temperature it boils at 164 ° C and distills without any noticeable change. Its vapor is flammable and burns with a blue flame [...] its taste is strongly sour and burning. It attacks the skin and destroys it like the strongest acids. "

Butyric acid essentially makes up the unpleasant smell of vomit or rancid butter. Butyric acid also contributes to sweat odor and, in some cases, bad breath . The vapors irritate the eyes and the respiratory tract. Butyric acid is produced when butter turns rancid. It dissolves very well in water and also in ethanol , diethyl ether and glycerine . Butyric acid is a weaker acid compared to formic acid and acetic acid . Iron , zinc , magnesium and other base metals dissolve very slowly with the evolution of hydrogen . Here, butyrates, in the form of moisture smell also of butyric acid:

Reaction of magnesium with butyric acid

With alcohols may esters are produced. For this reaction is heat and a catalyst such. B. Sulfuric acid necessary:

Reaction of butyric acid with ethanol

Since butyric acid is formed from carbohydrates by butyric acid bacteria under anaerobic conditions , it occurs in foods that require fermentation processes for their preparation , e.g. B. Cheese , sauerkraut , beer and bread; it is also found in milk, meat juice and sweat , as well as in wood vinegar . It is also found in some plant lipids, mostly in low concentrations . The original assumption that the foul-smelling, pungent and corrosive liquid that various species of ground beetles (Carabidae) such as the real ground beetles ( Carabus spp.) Spray as defense from the pygiadial gland contains butyric acid, was put into perspective in later studies. 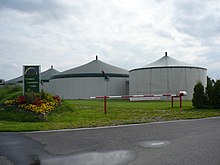 Fermenter of a biogas plant

The gram-positive , anaerobic , spore-forming bacterium Clostridium tyrobutyricum is able to produce butyric acid through fermentation . It has the ability to break down both glucose and xylose . The main metabolic end products are butyric acid, acetic acid , hydrogen and carbon dioxide . The simplified reaction equation is:

However, the yield in fermentations is considerably lower than the theoretical maximum, since butyric acid production is accompanied by acetic acid production . The production of fermentative butyric acid is mainly carried out in synthetic growth media with glucose , xylose or sucrose as the carbon source. During the past decade, when the concept of sustainable production of fuels and chemicals from residual raw materials was paramount, butyric acid was made from corn fiber. Using lignocellulose for the biological production of fuels and chemicals requires pre-treatment and enzymatic hydrolysis to release glucose and xylose from the lignocellulose matrix. Depending on the raw material and the hardness of the pretreatment, pretreatment processes also release toxic compounds such as carboxylic acids , furan derivatives and phenolic compounds that inhibit microbial metabolism and growth . Therefore, inhibition could be one of the first obstacles to be overcome when using hydrolysates from second generation biomass for biological production processes, especially when using undiluted hydrolysates with high sugar concentrations.

Metabolism in the gut

In the human large intestine, butyric acid is mainly produced when prebiotic carbohydrates are broken down by intestinal bacteria. The associated pH value shift into the acidic range makes the environment unfavorable for salmonella and other pathogens. In addition, butyric acid appears to directly stimulate bowel movements and serves as an energy source for the epithelial cells of the colon.

Along with propionic acid , hydrogen sulfide and volatile organic compounds containing sulfur ( methanethiol , dimethyl sulfide ), butyric acid is a cause of bad breath in humans.

Since the formation of butyric acid is a sign of putrefaction , its odor perception serves as a warning odor. The odor of butyric acid can be reduced with bases such as caustic soda , solutions of carbonates , etc. In the process, odorless butyrates are formed.

In addition to hydrogen sulfide, butyric acid is used to produce inexpensive, particularly effective and long-lasting stink bombs . The penetrating odorous substance is also used to drive away animals with a fine sense of smell, such as moles.

Butyric acid is used in various industries . There is currently great interest in using it as a precursor for biofuels , e.g. B. biobutanol to use. With the rise in the price of oil , the continued decline in the availability of petroleum and the growing need for clean energy sources , research has recently been directed towards alternative fuel sources .

Butyric acid also has numerous uses in the pharmaceutical and chemical industries . First, butyric acid for their anti-cancer activity known since it in a variety of cells , a morphological and biochemical differentiation induced, which for the simultaneous suppression of the neoplastic leads properties. As a result, these studies of various prodrugs that are derivatives of butyric acid were examined for their potential use in the treatment of cancer and hemoglobinopathies , including leukemia and sickle cell anemia , and in protecting hair follicles from radiation and chemotherapy- induced diseases.

In the chemical industry butyric acid is mainly used for the production of cellulose - plastics used. Butyric acid esters are used as flavorings and fragrances in the beverage, food and cosmetics industries.

The esters of butyric acid have a fruit odor in many cases and occur naturally in many fruit aromas.