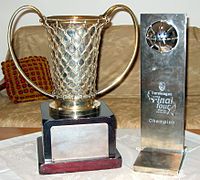 The European Champion's Cup was a basketball competition that was held between 1958 and 2000 under the auspices of FIBA .

The champions of the national associations of the Fédération Internationale de Basketball were eligible to participate . The European Cup was considered the most important continental title before the European Cup Winners' Cup and the Korać Cup .

When the ULEB Euroleague started playing in 2000 , FIBA stopped the European Cup and founded the Suproleague , which was also discontinued after only one season. 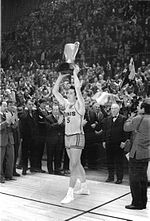 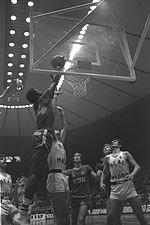 The European Champion's Cup was founded in 1958 under the auspices of FIBA . It was the first European basketball cup and from its inception to its discontinuation in 2000 it was also the most important. The champions of all basketball federations that were part of the Fédération Internationale de Basketball were eligible to participate .

The competition was initially played as a pure play-off, and a new mode was only introduced in 1987.

The tournament was dominated in the first few years by teams from the Soviet Union , which all won the first six events. The first three seasons were won by ASK Riga , two titles were won by CSKA Moscow and Dinamo Tiflis was victorious once. It was only in the 1963/64 season that the Spanish Real Madrid team managed to break this dominance. For Real it was the beginning of a European era, in the following four years the Madrilenians won the national championship cup three more times. The success of 1964/65 also made the “Royal” the first to receive the Triple Crown , the triple in basketball. Madrid's triumphal march was interrupted in 1966 when Simmenthal Milano won the title , the first success of an Italian team.

In the 1970s, alongside Real, which increased its collection of titles to seven, particularly Pallacanestro Varese from Italy was convincing . The team - called Ignis , Mobilgirgi or Emerson for sponsorship reasons at the time - reached the final ten times in a row between 1970 and 1979 and won it five times. Between 1974 and 1978, Varese and Madrid met four times in the final.

It was again Italian teams that dominated the national championship cup in the 1980s. There was no consistently strong team, as with Varese in the 1970s, but with Pallacanestro Cantù , Virtua Roma and Olimpia Milano, three teams that won a total of five titles. The Yugoslav clubs Cibona Zagreb and Jugoplastika Split were both successful twice . As the second team after ASK Riga, the latter also managed the feat of winning the competition three times in a row.

For the 1987/88 season there were serious changes in the tournament mode. Now it was group phases in which, in the end, four teams qualified for a Final Four tournament , which was played in a neutral location. Here two teams competed against each other in semi-finals. The winners qualified for the final, from which the winner of the European Cup came out.

Further restructuring of the competition was initiated with the renaming to FIBA European Championship . A reform of the tournament, however, was equivalent to changing the eligibility for the clubs. Because until now only the national champions of the respective country and the defending champions were allowed to take part in the national championship cup, from the 1991/92 season the runners-up in the major leagues also had the opportunity to participate in the FIBA European Championship . The conditions of participation were further relaxed after the name was changed to FIBA Euroleague .

After the triple triumph of Jugoplastika Split, Partizan Belgrade won the first edition of the FIBA European Championship . With CSP Limoges , a French club won the most important European basketball cup in 1993 for the first and only time. The FC Barcelona reached in the 1990s, four times and five times in the final, but could never win it. In 1994 this succeeded with Joventut de Badalona, the second Spanish team to Real Madrid, who won their eighth and last title that year and are thus record winners of the European Cup . The defeated final opponents, both from Badalona and Madrid, were the Greeks from Olympiacos .

For the first triumph of a Greek team, Panathinaikos Athens , which won the last event under the name FIBA European Championship 1995/96 .

The third name change of the competition took place in the 1996/97 season . In order to further modernize the tournament, it was henceforth called FIBA Euroleague . In addition, the participation of three teams from the same nation was now possible.

The first season under the new name won Olympiacos, who previously failed twice in the final. Virtus Bologna and Žalgiris Kaunas from Lithuania each won their first title in the national championship at the end of the millennium.

In the 1999/2000 season, the FIBA Euroleague was held for the 43rd and last time and won by Panathinaikos Athens.

In 2000 there was a split in European basketball. Many of the most important clubs, including Real Madrid , FC Barcelona and Olympiacos Piraeus , joined the independent ULEB with the aim of creating their own, economically more modern and efficient competition, which was also realized with the ULEB Euroleague .

Seasons of the FIBA European Cup and the EuroLeague