Children's game of the year 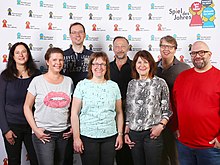 As with the game of the year , a nomination list with three games is published in May of each year (2004 to 2010 with five games), from which the main prize winner is then selected by the jury in June. Since 2010, the winner of the children's game award has been announced at an independent award ceremony in Hamburg.

The children's game of the year is mainly about board games, the specified minimum age of which is in the range “from 4” to “from 6”, and the core target group are kindergarten and school children up to an age of around 8 or 9 years.

Cologne-based games critic Christoph Schlewinski is the coordinator of the children's play jury. The jury currently consists of four members of the Spiel des Jahres e. V. and three advisory boards that are appointed for a limited time. Until 2009, the club members were also part of the jury for the game of the year . Advisory board activities were advertised publicly for the first time in the 2019/20 class.

In addition to the main prize winners and the nominees, a shortlist was published in 2002 and 2003 . Since 2004, the jury has been creating a recommendation list that typically includes around seven games.