Mikulov ( German  Niklasberg ) is a municipality in Ústecký kraj in the Czech Republic .

Town and surrounding area from the striker saw from

The locality is located in Northern Bohemia in 595  m nm height at the southern slope of the Ore Mountains , about 14 km northwest of Teplice ( Teplitz ) at the old Freiberg Teplitzer Post Road between Moldava ( of Moldova ) on the crest and Hrob ( Kloster grave ) at the foot of the Ore. In the northeast, at 909 m, rises the second highest mountain in the Eastern Ore Mountains , the Pramenáč ( Bornhauberg ) and in the west the 869 m high Bouřňák ( Stürmer ).

No districts are shown for the municipality of Mikulov. The one-layer Vitiška ( Wittichbaude ) belongs to Mikulov .

The mountain town in its vicinity 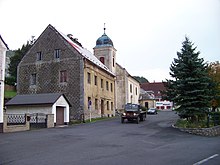 Street in the town center 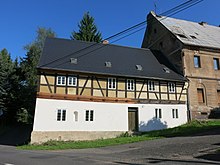 Half-timbered house near the village

The place was founded in 1540 under the name Neuschellenberg as a settlement of Saxon miners by Count Lobkowitz . The oldest document of the place concerns a privilege granted by Emperor Ferdinand I on May 7, 1543 to the three brothers Johann Litwin, Christoph and Wenzel von Lobkowitz on Bilin , Tein and Dux . On February 11, 1554, the Lobkowitz brothers gave the community a printed mountain ordinance, thus taking the first step in the development of the town into a mountain town. In 1596 Emperor Rudolf II gave the town a coat of arms and elevated it to a mountain town. The privileges of the town were regularly confirmed by the sovereigns until the 19th century. After mining came to an end, the population laboriously subsisted on farming. Since the opening of the Most – Moldava railway line , which used to be known as the “Teplitz Semmering Railway”, tourism slowly developed, first as a summer resort, and later also as winter sports.

After the First World War , Niklasberg was incorporated into the newly created Czechoslovakia in 1919 . Due to the Munich Agreement the city from 1938 to 1945 for belonging district Teplice , Region of Usti nad Labem , in the German Reich District of Sudetenland . The German residents were expropriated and expelled in 1945 . The town charter was revoked.

Until 1845 Niklasberg was predominantly populated by German Bohemia , which were expelled.

The city coat of arms awarded by Emperor Rudolf II in 1596 shows a city wall with a city gate on a shield. Above the city gate is St. Nicholas depicted with a scepter, below the emblem of the mining industry.

Cities and municipalities in Okres Teplice