There were three female doping sinners in this discipline who were convicted and disqualified in 2016.

The qualification was carried out in two groups. The qualification height for the direct entry into the final was 1.96 m. None of the participating jumpers approached this height at all, as it became clear that a jumped 1.93 m was sufficient to qualify for the final. Fifteen athletes (highlighted in light green) reached the final. However, among them were the three above. Doping fraudsters, so that only twelve of the finalists made it into the ranking.

Svetlana Radzivil from Uzbekistan - here on an Uzbek postage stamp - fails with 1.89 m in the qualification 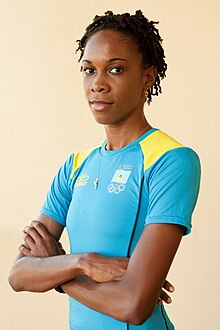 Levern Spencer from St. Lucia skips 1.85 m in qualification, which is not enough for the final

There were fifteen athletes in the final, none of whom had reached the qualifying height of 1.96 m, because in the elimination it became apparent that 1.93 m would be enough for the final. Two high jumpers from the Czech Republic and one participant each from Belgium, Germany, Italy, Sweden, Kazakhstan, Croatia, Russia, Spain, the Ukraine and the United States competed for the medals. Three other athletes - two from Russia and one from Ukraine - were convicted and disqualified eight years after these games during follow-up controls for doping abuse .

Six high jumpers were still in the competition when the height of 1.99 m was required. By then, Vlašić, Hellebaut, the Spaniard Ruth Beitia and the German Ariane Friedrich had mastered everything in the first attempt. Howard and the Swede Emma Green had two failed attempts, whereby Green had only taken the last 1.96 m with their third jump. Only Vlašić kept her white vest at 1.99 m. It took Hellebaut two and Howard three tries to jump the height. Beitia, Friedrich and Green failed three times each. Ruth Beitia and Ariane Friedrich took fourth place together. Emma Green was sixth.

At 2.01 m, Vlašić, Hellebaut and Howard had a medal, but the ranking had yet to be clarified. Vlašić failed again, Hellebaut mastered the task with her second jump, Howard tore three times, she won the bronze medal with a jump of 1.99 m. It went the same way over 2.03 m: Vlašić took the height straight away, Hellebaut with her second attempt. Now 2.05 m were placed and the sequence was reversed for the first time: Hellebaut showed strong nerves and was successful with the first jump, while Vlašić had her first failed attempt at the competition. But she stayed in the race and took the second jump. It continued with 2.07 m, which would have been an Olympic record . Here the decision was made. Vlašić failed three times, while Hellebaut refrained from further attempts after a failed jump. Tia Hellebaut won gold because she needed fewer attempts over 2.05 m at the same height. For Blanka Vlašić there was the silver medal.

Tia Hellebaut was the first Belgian Olympic champion in the women's high jump . Blanka Vlašić won the first Croatian medal in this discipline.