Reiner Kunze at a reading in Schorndorf (2012)

Reiner Kunze is the son of a miner and a kettler . From 1947 he attended an advanced class that enabled working class children to attend a higher education. Two years later he was proposed by the principal of his school as a candidate for the Socialist Unity Party of Germany (SED). In 1951 he passed his Abitur in Stollberg .

He published his first poems in 1953 in the magazine neue deutsche literature . At first Kunze oriented himself towards socialist realism , later he began to distance himself increasingly from the ideas of the SED. His first volume of poetry appeared under the title Birds over the Dew .

After leaving university, he temporarily worked as an assistant fitter in heavy engineering.

In 1961 he met the doctor Elisabeth Littnerová, who came from a German-Czech family, and after a long period of writing letters, he met personally. They married, and in 1962 Elisabeth Kunze moved from Czechoslovakia to the GDR, where she began to work as an orthodontist in Greiz / Thuringia . Reiner Kunze worked as a freelance writer in Greiz and in a farmhouse in Leiningen only 15 km away. Through his wife and during longer stays in Czechoslovakia, he came into contact with Czech artists, made friends among them and later translated works by over sixty Czech and Slovak poets to date. Many of them, including the poetically influential Jan Skácel , paved the way as a translator to become known in the German-speaking world. In 1968 Kunze resigned from the SED in protest against the crackdown on the Prague Spring by the Warsaw Pact troops . As a result, the State Security created a file on him under the code name “Lyrik”, which grew to many thousands of pages by the end of the GDR and documents the “disruptive measures” against him in the east and west. 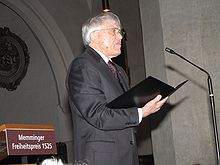 Reiner Kunze in the Martinskirche in Memmingen for the award ceremony of the second Memminger Freedom Prize 1525 on March 20, 2009

The publication of the volume of poems Sensible Ways - Forty-eight Poems and a Cycle met resistance in the Politburo of the SED and in the GDR Writers' Association . It became increasingly difficult for Kunze to publish his works. His friend Heinz Knobloch was able to get him small orders for reviews in the weekly mail up until 1974 - not without personal risk . Reviews appeared there from 1969 to 1974 under the pseudonyms "Jan Kunz" and "Alexander Ludwig". When the children's book The Lion Leopold: Fast Fairy Tales, Fast Stories was published in the Federal Republic of Germany in 1970 , Kunze was subject to administrative penal proceedings, as was the case with the book Sensible Ways , and the author's copies were confiscated.

In 1976 his prose volume The Wonderful Years in the Federal Republic was published. In it he sharply criticized the GDR system. The manuscript had been secretly brought to the Federal Republic. Because of his dissenting attitude, Kunze was expelled from the GDR Writers' Association on October 29, 1976 in Weimar by decision of the Erfurt / Gera district association, which amounted to a professional ban. A GDR edition of the book Der Löwe Leopold , which was to appear in the same year, was not delivered, 15,000 copies ready for sale were crushed.

On April 7, 1977, Kunze applied for expatriation from the GDR because of the threat of several years in prison for himself and his wife. The application was approved within three days, and on April 13, Kunze and his relatives relocated to West Germany.

In 1978 he wrote the screenplay for the film The Wonderful Years . In 1981 he published his first volume of poetry after moving to the west of Germany, On Your Own Hope .

In 1990, Kunze was one of the first victims to see his Stasi files . He published excerpts from the documents, which comprised twelve files with a total of around 3,500 sheets, in the documentation “Cover name poetry”. The documents showed that a family friend, Ibrahim Böhme , later chairman of the GDR SPD, was a long-time unofficial employee of the Ministry for State Security . The documentation fueled the discussion about the question of whether the Stasi files should be accessible.

Reiner Kunze is a critic of the 1996 spelling reform . On the basis of the Frankfurt Declaration on the Spelling Reform of 1996, he signed the Frankfurt Appeal for the Spelling Reform in 2004 . So he turned in many individual contributions ( Lit .: inter alia FAZ) and in his memorandum The Aura of Words against the spelling reform. Reiner Kunze also appeared publicly against "language genderism". In this regard, Kunze is quoted as follows in the "Passauer Neue Presse": "Language genderism is an aggressive ideology that is directed against the German language culture and the world literary heritage that has emerged from this culture."

He lives as a freelance writer in Erlau , Obernzell near Passau .

Signature of Reiner Kunze in 1986

Reiner Kunze is a member of the Bavarian Academy of Fine Arts , the German Academy for Language and Poetry , the Free Academy of the Arts Rhein-Neckar and the Saxon Academy of the Arts , the PEN center for German-speaking authors abroad . From 1975 to 1993 he was a member of the Akademie der Künste (Berlin) , from which he and many colleagues left in protest against the en bloc takeover of the members of the East Berlin Academy of the Arts. Kunze is an honorary member of the Collegium Europaeum Jenense of the Friedrich Schiller University Jena , the Saxon Literature Council, the Free German Association of Authors , the Hungarian Writers' Association, the Czech PEN Center and the New Fruit Bringing Society in Köthen / Anhalt - Association for the Maintenance of the German Language .

In his honor, Kunze's hometown of Oelsnitz donated a Reiner Kunze Prize , which was awarded for the first time in 2007.

Reiner Kunze's poetry and prose have been published in other European and non-European countries (including Argentina, Brazil, Japan, Korea and the USA), translations into 30 languages ​​in over 60 individual editions.

In 2006 the Kunze couple established a foundation into which they contributed their assets. After the deaths of Elisabeth and Reiner Kunze, a board of trustees made up of literary scholars and exhibition organizers will convert the house into a museum that will help future generations to understand Germany's recent history. Letters, film clips, photos, confiscation notices, Stasi documents and much more from Kunze's personal possession will be included in the collection and, as a whole, will paint a “picture of German-German life”.