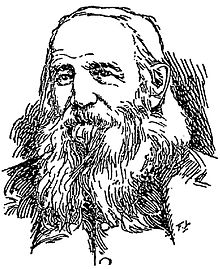 Thomas Gold Alvord (born December 20, 1810 in Onondaga , Onondaga County , New York , † October 26, 1897 in Syracuse , New York) was an American lawyer, trader and politician. As a result of his political activities he became known as "Old Salt".

His family moved to Lansingburgh , Rensselaer County , in 1813 . He graduated from Yale College in 1828 . He then studied law with the later US MPs Thomas A. Tomlinson and George A. Simmons in Keeseville , got his license to practice law in 1832 and then began to practice in Salina . In 1846 he worked as a tree timber dealer.

Alvord began his political career as a Democrat , then joined the Free Soil Party with Samuel J. Tilden in 1848, and was then re-elected as a Democrat to the New York State Assembly in 1858 . After the Fort Sumter incident in 1861, he became a Union Democrat and presided over the Union Convention in Syracuse. He was nominated for the Assembly, confirmed by the Republicans , and elected unopposed. For the term of office of 1864 he was elected as a Republican and remained a member of that party from then on.

He died in Syracuse in 1897 and was buried there in Oakwood Cemetery .