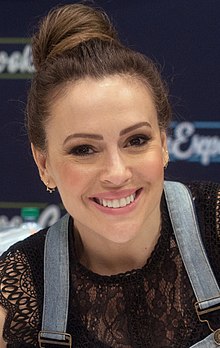 Alyssa Jayne Milano (born December 19, 1972 in Brooklyn , New York City ) is an American actress , producer , fashion designer , singer and activist . Among other things, she is known for spreading the hashtag #MeToo , which received worldwide attention through her commitment.

Alyssa Milano began her career at the age of seven after being selected from 1,500 female competitors in a casting . For a year she played the title role in the musical Annie on a US tour and then worked in an American musical adaptation of the novel Jane Eyre at the Theater Opera Music Institute in New York. The first television roles and commercials followed .

In 1983 she had her breakthrough role as Samantha in Who's the Boss? . The family moved to Los Angeles near the location . The series ran very successfully from 1984 to 1992. From 1997 to 1998 she played the role of Jennifer Mancini in Melrose Place .

In early 2007 she was in front of the camera for the ABC drama series Reinventing the Wheelers . The series was not included in the main program because ABC did not want to free up airtime for another women-run series. The independent film The Blue Hour was shown at the San Sebastian Film Festival in 2007 , the same year the horror film Pathology was released in US cinemas.

From June 2013 to September 2014 she starred as Savannah "Savi" Davis on the ABC summer series Mistresses . She left the series after the end of the second season because, according to her own admission, she did not want to move from Los Angeles to Vancouver for the filming of the third season and did not want to be separated from her family.

Alyssa Milano released five music albums between 1989 and 1992, which went platinum in Japan and South Korea.

In 2007, Milano presented her fashion collection "TOUCH by Alyssa Milano", clothing for female baseball fans. In connection with this, she opened her own blog on the Major League Baseball website , on which she publishes articles on a weekly basis.

In 2003 she was officially “Celebrity Ambassador” for UNICEF , and in 2007 also for the “Global Network for Neglected Tropical Diseases”. Alyssa Milano is a vegetarian and supports the animal rights organizations PETA and the marine conservation organization Sea Shepherd. In 2007, as part of the PETA Let Vegetarianism Grow on You campaign, she posed in a dress made of lettuce and vegetables . Together with Eva Longoria , Alyssa Milano advocates tougher penalties for the abuse of animals. Milano co-edited two children's books with author Debbie Rigaud to "inspire a generation of benefactors".

Weinstein scandal and "Me Too"

On October 15, 2017, Milano responded to the Weinstein scandal with a call on Twitter to highlight the scale and ubiquity of the problem. She wrote: "If you have been sexually harassed or assaulted, write" Me too "in response to this tweet". Milano had her own #MeToo experiences in the past , but left it open whether she would ever make them public. In her opinion, this attitude is #MeToo: that you don't have to tell your own story. You just have to say “me too”.

Alyssa Milano has Italian ancestors. Her mother Lin is a fashion designer and her father Tom edits film music . Her brother Cory was born in 1982. Milano grew up in the New York borough of Staten Island .