This article is about the actor, for the physicist of the same name, see David Keith (physicist)

Keith was born in Knoxville. His mother, Hilda Earle, is an employee of the Board of Education, a school administration for Knox County . His father, Lemuel Grady Keith Jr., is an employee of the Tennessee Valley Authority Human Resources Department . Keith studied at the University of Tennessee and received his Bachelor of Arts degree in Speech and Theater . In 2000 he married Nancy Clark, a realtor, and has lived with her in Knoxville ever since. 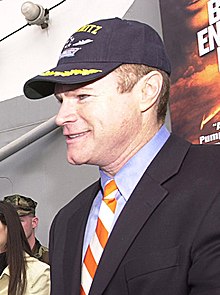 In 1979 he worked as an actor in front of the camera for the first time. There he had an appearance in the drama The Rose , and in The Great Santini he impersonated a criminal. David Keith's first major supporting role was in the 1980 prison film Brubaker starring Robert Redford . In 1982, he was seen in An Officer and a Gentleman with Richard Gere and Debra Winger . For this achievement he received in 1983 two nominations at the Golden Globe Awards as Best Young Actor and Best Supporting Actor . In The Fire Devil (1984) he was seen next to the then child actress Drew Barrymore . For the horror film The Curse (1987) and Tennessee Buck , he worked as a director and was also seen as an actor. In the Chris Columbus comedy Heartbreak Hotel , he played Elvis Presley , alongside Tuesday Weld .

Keith was featured in The Lead Back - The Two Jakes as Detective Lt. Loach, alongside Jack Nicholson (also directed) and Harvey Keitel . In 1994 he was seen in the action movie Good Cop, Bad Cop as Mace, Who Can Prevent an Attack. In the same year, played the arrogant baseball player Jack Parkman in The Indians of Cleveland II , who is also the best player on the team and is replaced by a Japanese swordsman due to lack of money. Charlie Sheen and Omar Epps can be seen next to him . In 1995 he played the role of the cowboy "Boo-Hoo" Boone in The Indian in the Kitchen Cupboard . He had a supporting role in the adventure film Gold Diggers - The Secret of Bear Mountain , the main role was cast with Christina Ricci . The film was nominated for the Young Artist Awards as Best Action / Adventure . In A Family Thing (1996) he had a minor supporting role as Sonny, where he worked with Robert Duvall , James Earl Jones and Michael Beach . At the side of Jessica Steen you saw David Keith in 1999 in the thriller In Doubt for the Defendants .

In the film year 2000 he was seen together with Matthew McConaughey in the film U-571 and with Robert De Niro and Cuba Gooding junior in Men of Honor as Captain Hartigan. The following year he starred alongside Owen Wilson and Gene Hackman in the action film In Crosshair - Alone Against All by John Moore as US Navy Master Chief Tom O'Malley in front of the camera. David Keith played Detective John Mulcahey in the horror film Carrie . In Daredevil (directed by Mark Steven Johnson ) he played in a supporting role the murdered father Jack Murdock of Matt Murdock / Daredevil (played by Ben Affleck ), in other leading roles were Jennifer Garner , Michael Clarke Duncan and Colin Farrell to be seen. In the same year Keith got the leading role of Nate Springfield in the thriller Hangman's Curse - The Curse of the Hangman by Rafal Zielinski , which was released directly on DVD in Germany. In the drama Raise Your Voice - Live Your Dream he played the father of the character Hilary Duff , who starred there like Oliver James in a leading role. Keith was seen as Vice President Walker in the 2006 film Air Force 2, opposite Mariel Hemingway (she played Sergeant Major Lynn Delany). Keith plays retired professional football player Yonk Allen in the sitcom The Class .