A diocese or a diocese is a territorially delimited ecclesiastical administrative district. The name diocese is derived from the subdivision of the late ancient Roman Empire into dioceses. The term diocese (of bishopric), on the other hand, refers to the jurisdiction of a bishop . Old names for it are Sprengel or Kirch (en) Sprengel , which today are only used for parishes .

The word diocese ( ancient Greek διοίκησις dioikesis , administration ') originally referred to the state financial administration in ancient Rome and was taken up by Emperor Diocletian (284-305) when he reorganized the empire . This subdivision was also retained in the following Late Antiquity .

The regional division of Diocletian was taken over by the old church in the 4th century for the geographical structuring of its sphere of influence. While the Orthodox churches use the term eparchy for higher-level structural units to this day, the term diocese came into general use in the Catholic West from the 13th century , and in German-speaking countries also the diocese . This form of church structure is used today in various other churches as well as in the Catholic Church, e.g. B. in the Orthodox Church, the Anglican Church , the Methodist Church , Old Catholic Church and parts of Lutheranism .

The establishment, definition and dissolution of dioceses is usually reserved for the Apostolic See ( can. 373 CIC ). The only exception to this is the Canonical Law of the Oriental Churches ( CCEO ), which assigns certain rights to the patriarch and the respective synod in the establishment, reorganization and dissolution of dioceses. In this case, however, the Apostolic See should at least be consulted.

The bishops' conference concerned is to be heard when a dioceses are established, circumscribed or dissolved ( can. 372 §2 CIC ). In addition, as is the case in Germany, for example, due to contracts, it may be necessary to make agreements with the states concerned for the establishment or definition of dioceses.

Each diocese is to be divided into parishes ( can. 374 CIC ). This also applies to the staff dioceses. In military ordinariates there is a corresponding structure, which can vary from case to case. Members of the military ordinariate are legally not completely outsourced from their diocese, as are the members of the currently existing personal prelature , Opus Dei .

The head of a diocese is the bishop . He has full jurisdiction and is therefore also called diocesan bishop to distinguish it from the titular bishop (auxiliary bishop) . He is obliged to reside in his diocese ( can. 395 CIC ).

The representative of the bishop in the ecclesiastical jurisdiction is the official and in the formation of priests the regens . Some bishops have an auxiliary bishop attached to assist them in the power of ordination , who, however, is entirely dependent on the diocesan bishop, although he is fully bishop in ordination. In exceptional cases, the Apostolic See can order a visit by an Apostolic Visitator .

Archbishop Julian Barrio Barrio on a visit to Biberach / Riss on the Way of St. James
→ Main article : Church province

An archdiocese is not legally different from the diocese. The name indicates a historical meaning or the seat of a metropolitan. In the latter case, the archdiocese forms the ecclesiastical province together with other dioceses, the suffragan dioceses . In rare cases, an archdiocese can also be a suffragan of another archdiocese. So is subordinate to z. B. the Archdiocese of Aix the Metropolitan in Marseille .

Usually the diocesan borders of the Roman Catholic Church adhere to political borders. Accordingly, the bishops of a country form a bishops' conference. Only in a few cases, such as in the Caribbean or the Middle East, does a diocese span several countries. At the time of the division of Germany, there were a few dioceses in Germany that comprised both West and East German areas.

The size of the dioceses varies from country to country; in general, the dioceses in the early Christian areas of the Mediterranean countries are much smaller in terms of both area and population than in later Christianized areas such as Germany .

Alternative forms of the diocese

→ Main article : Dioceses of the Roman Catholic Church in Germany

In the Roman Catholic Church in Germany there are currently 27 dioceses (7 archbishoprics and 20 dioceses).

In Austria there are two archdioceses, which represent the ecclesiastical provinces , and seven territorial dioceses (suffragan dioceses), as well as a military diocese and a territorial abbey ( immediate , directly subordinate to the Holy See ). The borders of the dioceses largely correspond to those of the Austrian federal states , but the Archdiocese of Vienna includes not only the city itself but also part of Lower Austria , and the east of North Tyrol belongs to the Archdiocese of Salzburg. 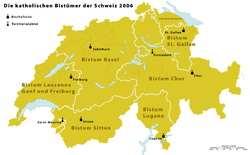 Map of the diocesan division of Switzerland 2006

In Switzerland there are no archdioceses with an ecclesiastical province. The tasks of an archdiocese are taken over directly by the Roman curia . This is a peculiarity in the Roman Catholic Church, which has already been discussed on various occasions.

There are six dioceses (commonly referred to as bishoprics):

There are also the two territorial abbeys, Abbey of Saint-Maurice and Abbey of Maria Einsiedeln .

The Principality of Liechtenstein forms the Archdiocese of Vaduz , which is directly subordinate to the Roman Curia.

Map of the diocesan division in Belgium

The Catholic Church of Belgium consists of an ecclesiastical province with eight dioceses. The archbishop is also a primate .

Dioceses in other countries

For an overview of all Catholic dioceses worldwide, see: List of Roman Catholic Dioceses .

The Orthodox Church knows different administrative systems, which are by and large similar to that of the Roman Catholic Church and are designed differently in the individual Orthodox regional churches. As a rule, the Greek word eparchy or metropolis is used, although this does not mean the Roman Catholic Church Province. The metropolitan system common in the old church (the subdivision of an association of dioceses or eparchies under a metropolitan), similar to the ecclesiastical province , is only known today by the Romanian Orthodox Church . In the Greek Orthodox churches, almost every diocesan bishop has the title of metropolitan and the head of a local church, if he is not a patriarch , that of an archbishop , but in some cases also that of a metropolitan.

The Evangelical Church AB in Austria is divided into seven dioceses, whereby diocese - also in the church constitution - is used as an alternative designation to superintendency . The Evangelical Augsburg Church in Poland is also divided into dioceses. In the Lutheran regional churches of Scandinavia, the district of a bishop is called pen , in Danish, Norwegian and Swedish the word for diocese.

The member churches of the Anglican Community are for their part also organized in dioceses.

See e.g. B. Archbishop of Canterbury , List of Dioceses of the Episcopal Church of the United States of America , as well as the individual articles on the member churches (cross-reference in the navigation bar to the article on the Anglican Communion).