The Dreisam is a 29.7 km long river in Baden-Württemberg under this name . It arises in the Black Forest ( district Breisgau-Hochschwarzwald ) from two source streams. When entering the Upper Rhine Plain, the Dreisam flows through the city of Freiburg im Breisgau and, after a north-westerly course, flows into the Elz from the left at Riegel am Kaiserstuhl ( Emmendingen district ) . Together with its longer left upper course, called Rotbach in the lowest section , the Dreisam is 48.8 km long. Its right upper course, the Wagensteigbach , is, however, richer in water (on average 1.96 m³ / s, compared to 1.37 m³ / s of the Rotbach) and thus part of the main line in the Dreisam system .

The name of the Dreisam is derived from the Celtic : * tragisamā , "the very fast".

The Dreisam begins in the basin-shaped Dreisam valley in the southern Black Forest of Baden . The confluence of the somewhat longer Rotbach from the Höllental and the slightly more watery Wagensteigbach is located near the bridge of the state road  127 from Kirchzarten to Stegen . 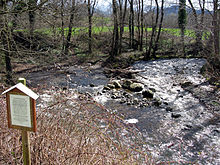 Diverting the commercial sewer in Freiburg at the sand trap. The Freiburg Bächle are fed from this canal

Common confluence of the Dreisam and the Alte Dreisam in the Elz (left), in the back right the Glotter joins the Dreisam.

From the point of this “river wedding” in the west of the Southern Black Forest Nature Park , the Dreisam in the Breisgau canalised to the west and includes the Krummbach and the Brugga from the left and the Eschbach from the right. At the eastern end of the Ebnet district , the river reaches Freiburg. In 1967, the Freiburg-Ebnet gauge was set up there near the Nepomuk Bridge and is part of the surface water monitoring network in Baden-Württemberg and its only monitoring station in the Freiburg urban area. In 2019 the river bed there was redesigned for around 580,000 euros so that the low and medium water levels of the river can also be recorded more precisely in the future. The step is also omitted so that fish can pass through the river. After passing through the Black Forest Stadium (formerly the Dreisam Stadium ), part of the water for the commercial canal and the Freiburg Bächle is diverted at the so-called "sand trap" .

This watercourse divides into a north arm and a south arm in the old town. Most of the southern arm joins the Dreisam immediately west of the bridge of the Höllentalbahn in the Stühlinger district ; the rest of the water flows west through the districts of Eschholz and Bischofslinde and is returned to the Dreisam at Lehen. The north arm flows (often underground) through the northwestern old town in the direction of the districts of Beur specific and Brühl and flows west of Gundelfingen into the Schobbach, which in turn flows into the Glotter near Nimburg-Bottingen. This means that this Freiburg Bächle water only reaches the Dreisam again shortly before Riegel.

In the 19th century, the Schwabentorwehr was built below the Greifeneggring to divert the Kronenmühlenbach and to extract sand and gravel in the Dreisam. Below the weir, the southern bank wall was protected with boulders in summer 2018. Stability was endangered due to undercutting, as floods had washed away the large stones that had been set in 2015. The protected wooden beams of the weir (large photo) were also partially gone or destroyed. From May to August 2019, the weir was converted into a modern ramp - similar to the sand trap - with a fish ladder for 1.5 million euros. This measure is carried out in accordance with the European Water Framework Directive , for which the city could have received funding from the state. Instead, she prefers to be credited with eco- points, which has also met with criticism. Actually, the measure should have taken place in 2012 and the regional council could have ordered it, for which there would have been no points. As a result of the reconstruction work, fine sediments of the Phorphyr gravel were washed out of the construction field, which at times colored the river red and partly deposited on or in the Dreisam sole. For this reason, the Freiburg gardening and civil engineering office added additions of excavation gravel at ten points between the Mariensteg and the motorway bridge in Lehen .

The Dreisam itself flows in the Freiburg city area in a north-westerly direction along the B 31 . After crossing under the federal motorway 5 , it runs northwards at March , between the Kaiserstuhl in the west and the Nimberg to Riegel, where it flows into the Elz . Only 135 m above its mouth, the Dreisam flows from the right to the Glotter descending from the Kandel .

The Dreisam was canalised from 1817 to 1842 under the direction of Johann Gottfried Tulla along its entire length from Kirchzarten to Riegel . In the east of Freiburg, however, it was renatured over a length of 800 m at the beginning of the 21st century. Before the canalization, the Dreisam flowed further west along the Kaiserstuhl eastern edge to the north. At Eichstetten the Eichstetter Mühlbach flowed to it, which today canalised almost the former bed of the Dreisam and flows northeast of the St. Michaelsberg ( 241  m above sea  level ) as Alte Dreisam at the same point in the Elz as the Dreisam. Against the background of the river's history, the Alte Dreisam is still treated as a tributary of the Dreisam. The Dreisam has an average water flow of 10.9 m³ / s at the point of confluence, without the Alte Dreisam one of 8.6 m³ / s.

The 15 km long Leopold Canal branches off just below the confluence with the aforementioned Elz . During floods, the water from the Dreisam flows into the Rhine via this canal . The canal ends northwest of Rheinhausen , southwest of Rust and west of the Taubergießen nature reserve .

The terrain relief in the Dreisam catchment area above Freiburg is unusually steep over a large area - although it only includes low mountain ranges - the average slope above the Ebnet level is 16 ° or 29%, with the Feldberg rising as the highest point relative to the level by 1185 meters, both of which ensure a high proportion of orographically induced precipitation. The solid rock of the mountain body has a small gap volume, which is why most of the rainwater drains quickly on the surface. Furthermore, in the rather round catchment area of ​​the Upper Dreisam, channels of similar length typically converge in a fan shape, which also means that the discharge peaks coincide in time and can be superimposed. For all these reasons, the Dreisam and parts of its catchment area are very endangered by floods.

The maximum discharge is due to the additional snowmelt in April. Precipitation is highest in summer, but because of the higher water turnover of the vegetation, it only leads to secondary discharge maxima.

A historically known flood , in which several bridges were destroyed and two people (see Carl Siegel ) lost their lives, occurred in March 1896. Because the Dreisam is straightened from Freiburg today and secured on both sides by flood dams, the Floods usually disappear without major damage. During a flood on December 23, 1991, however, damage was caused by flooding in the east of Freiburg. Under the bridges of the Mannheim – Basel railway (Rheintalbahn) , the riverside paths are often flooded during floods, which in 2010 and 2013 cost the lives of two cyclists despite warning signs. In 2013 barriers were installed that are closed in the event of flooding. Occasionally, however, surfers and whitewater drivers also use the floods of the Dreisam.

The water level of the Dreisam sinks during drought and heat waves. For example, the level at Ebnet in July 2018 was 18 centimeters in 2003, even zero. Then the Bächle in Freiburg do not carry any water and fish are stunned and fished in the Dreisam section between Sandfangweg and Ottiliensteg and relocated to the upper reaches of the Dreisam. The water temperature then rises to 24 to 25 ° C during the day. At March the river bed is completely dry and the fishing club rescues surviving fish there too. The bitterling , which lays its eggs in the freshwater pearl mussel , is acutely endangered . This endangered mussel cannot survive without water and dies, says Ottmar Scherer from the March-Neuershausen fishing association.

The catchment area of the Dreisam covers an area of ​​around 649 km² up to Riegel and is therefore one of the medium-sized catchment areas in Germany. It has a widespread, tree-like (dendritic) drainage system in the upper part and can be characterized as a complex flow regime of the first degree , which is characterized by two maxima of the flow rate . The larger is in spring (snowmelt), a lower maximum is in summer or autumn at times of maximum rainfall .

The tributaries meet the Dreisam in two areas: In the Zartener Basin above Freiburg, in addition to the source rivers Rotbach and Wagensteigbach in downstream sequence , these are the Krummbach (called Zastler Bach in the upper reaches), the Brugga and the Eschbach, each with a striking parallel to the Dreisam trending lower reaches. Only at the mouth of the Dreisam do the Glotters and, depending on the hydrological classification, the Alte Dreisam with Eichstetter Mühlbach as the upper reaches, each after a long, partly branched course in the lowlands.

Plastic ducks on the Dreisam

The Dreisamwasser used to drive mills and provide energy for businesses such as gemstone cutters and tanneries. There are now small river power plants again, for example at the sand trap. Today fishing - except for amateur fishermen - no longer plays a role, in the past even salmon were caught in the river. Nevertheless, 10,000 young salmon were released in Freiburg in the summer of 2016 between Kaiser and Kronenbrücke and at the height of the Kartaus.

Today the banks of the Dreisam with its meadows are used as a recreational area for walking, barbecuing and swimming. The Dreisam with the cycle path on the south bank and the motorways on both banks (city center, feeder center) is a guideline for individual traffic. Between Schwabentorbrücke and Mariensteg, the missing footpath on the north bank was built in summer 2015, and the bottleneck under Mariensteg on the south bank was removed by December 2015.

Since 2011, an annual “ duck race ” has been held as a benefit event on the Dreisam in downtown Freiburg . Numbered plastic ducks are dumped into the river by the thousands and removed a few hundred meters downhill.