Genk is a city in the Belgian province of Limburg . It is located on the Albert Canal .

Genk was an insignificant hamlet until, in 1901, André Dumont discovered significant coal deposits in the nearby village of As and shortly afterwards on its own boundary through drilling. Genk then grew into one of the most important coal mining areas and industrial centers in Belgium.

A deed of gift dated December 13, 1108 first mentioned "Geneche". The hamlet of Genk and its surroundings probably belonged to the county of Loon in the 11th century and to the duchy of Liège from 1366 . In the 17th century, jumps were built for self-defense , the village hill in Genk itself and others in the hamlets of Winterslag, Gelieren, Sledderlo, Langerlo, Terboekt and Waterschei.

In 1900 Genk and the surrounding hamlets only had 2,437 inhabitants. With the discovery of hard coal in 1902, growth began in several waves of immigration. On June 3, 1914 in the mine , the first coal promoted Winterslag, more mines were built in Waterschei and Zwartberg. In 1930 Genk already had 24,574 inhabitants, mostly miners . Immigration came from Poland and the Ukraine in the 1920s and 1930s , then from Italy , Greece , Spain and Portugal . Since 1964, more employees came from Turkey and Morocco .

As in other Western European coal regions, a structural change began in the 1960s . In 1966 the Zwartberg mine was closed together with Walloon mines, Waterschei closed in 1987 and Winterslag in 1988.

In 1992 Genk hosted the 9th  European Shooting Festival , an event organized by the European Association of Historical Shooting .

ArcelorMittal is a big employer . Around 3,000 tons of stainless steel slabs (formats up to 2000 x 160 mm) are produced every day in the Genk steelworks . These slabs are then rolled into coils in the Carlam hot rolling mill ( Charleroi ) and then sent to the other cold rolling mills, mainly in France ( Isbergues , Gueugnon ) and Belgium (Genk). Stainless steel sheets are produced from the coils, which are then further processed by the customer. Another stainless steel plant (ArcelorMittal Châtelet) was built in Charleroi a few years ago.

The Ford plant, which opened in 1964, was the largest employer in the Limburg province with around 4,500 employees after the end of mining . The US automobile company manufactured its Mondeo , Galaxy and S-MAX models there. The Transit was also built in Genk until 2004 . Ford announced in October 2012 that it would close the plant in 2014. Around 5,000 other jobs depended on Ford. The plant ceased production on December 18, 2014.

The port of Genk in the southern district of Langerlo was founded in 1936 on the Albert Canal, which was built at the time, as Port Charbonnier de Genck , in order to transport coal from the three Genk mines and the Houthalen mine to the Walloon heavy industry around Liège. Only later was the name changed to Kolenhaven van Genk . With the end of mining, the use of the port also changed. To supply the second-largest non-nuclear power plant in Belgium in 2016 , which was initially operated by EBES (now E.ON ) at the port of Genk since 1976, hard coal has been imported here since 1986 after exporting more than 89,000,000 tons.

In addition, a container terminal was built at the port from 1999 , which currently has a storage capacity of 5,000 containers and an annual turnover of 80,000 containers on 18,000 square meters. Both a connection to the Belgian railway and the nearby motorways E313 (from Antwerp to Liège) and E314 (from Leuven via Heerlen to Aachen) are used.

One of the mining cathedrals: The Sankt Albertus Church in Zwartberg

As a result of the workers from the Netherlands, Poland, Italy, Ukraine, Russia, Turkey and Morocco who had immigrated from ever wider circles to work in the mining industry since around 1913, many religions also became at home in Genk. The mining companies and the faithful have built churches of various Christian faiths in Genk in the course of time , and later also mosques . 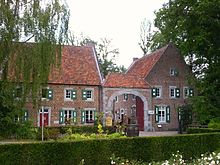 The Domein Bokrijk belongs to Genk, which has an important open-air museum for Belgium , a large playground and a botanical garden, the Bokrijk Arboretum . The Europlanetarium should also be mentioned as well as the adjacent Kattevenia recreation area.

The municipal Emile Van Dorenmuseum , which has been in operation in the Villa Le Coin Perdu, the studio and residence of Emile van Doren since 1976, recalls the history of landscape painting in and around Genk .

In 2012 Genk hosted Manifesta , the European Biennale for Contemporary Art. Together with the Venice Biennale and the Documenta in Kassel, Manifesta is one of the most important art events in Europe.

Municipalities in the Belgian province of Limburg