The title of this article is ambiguous. Further meanings are listed under Hage (disambiguation) .

Hage is a street settlement on a former sea ​​dike on the northern edge of the East Frisian Geest between the north and Arle . In the upstream marsh , the Hager Tief flows along the Geestrand , and branching off from it further west of the town, the Marschtief runs in a south-north direction, already at the level of the town of Lütetsburg . In the eastern city Berum and the western Lütetsburg there was chieftain seats . There was a castle in the western Hage.

First traces of settlement and the high Middle Ages

Hage was probably built at the end of the 12th century on an old trade route from the Bronze Age. The first settlements were found on the so-called “Hagherweg”: Hilgenbur and Vnuggenbur.

In the early 13th century there are reports of monastic life in Hage. Initially a Benedictine monastery was built, but the existence of the St. Anne's monastery, which was probably abandoned in 1235, cannot be clearly proven. From the middle of the 13th century, the nuns were followed by a Dominican monastery .

The Ansgari Church was completed around 1250 . To this day it dominates the townscape of the patch.

However, Hage was first mentioned in a document after 1400 as Haghene, Hagha or Haghe, which means something like "closely related". The name Hage can be found for the first time in the East Frisian document book around 1410.

The East Frisian noble family Hinkena is of particular importance for the development of the place. With her castle, the west wing of which can still be seen today, she secured the old trading center of Hage. In 1466 the castle and the lands belonging to it became the property of the church and for many centuries served to finance a second pastor in Hager, the so-called Westerpastorei.

In the 17th century prosperity moved into Hage, which lasted until around 1715 and disappeared again in the storm surge year 1717 (Christmas flood, 2800 deaths in East Frisia ). Hage also received market rights in 1656 and from then on could call itself “market town”. According to the princely charter awarded at the time (September 11, 1656), Hage was allowed to hold two markets per year. This tradition continues to this day.

In the early 19th century (1817-1819) Hage received a paved stone road for the first time. Where previously there was only a narrow, tree-lined and often hardly passable “Hagherweg”, the new road was built with the help of a Dutch road construction company.

Another building that dominates the townscape is the eight-story Hager Windmühle , an eight-sided gallery Dutch with a five-story brick substructure. With a height of 30.20 meters to the top of the cap, it is today the tallest windmill in Germany and one of the tallest in Europe. It was built in 1872/73 and after a fire in 1880 one floor was added.

At the end of 1914, the Imperial Navy built the Hage airship port due to its strategic location immediately north of the village, which was completed by 1915 with four large airship hangars. Hage was one of the main attack bases of the airships against Great Britain in the First World War . In 1917, the airships were moved further inland due to increasing air attacks by Allied airmen. The halls had to be demolished in 1921 in accordance with the provisions of the Versailles Treaty . The area was used again by the Luftwaffe from 1937.

Along with a structural change at the beginning of the 1960s, the share of the labor force in agriculture fell to 30.2 percent in 1961 and to 26.1 percent in 1965. Small family farms disappeared rapidly. New roads and farm roads were built and the first wind turbines to generate electricity were installed. In October 1963 the new town hall was inaugurated. In 1965, Hage merged with Berum, Blandorf-Wichte, Lütetsburg and Westdorf to form the joint municipality of Hage . After both the passenger traffic of the Deutsche Bundesbahn in 1983 and the freight train operation in 1989, an operator association for the museum train coastal railway East Friesland was founded. This museum train now stops at the former Hager train station.

In the 1980s and 1990s, Hage developed into a rural center with shopping and leisure areas. In 2006 the former Hager train station, which was damaged by the fire in the roof structure, was demolished. In the same year the construction of the relief road began, which was completed in 2010.

On July 1, 1972, the communities Berum and Blandorf-Wichte were incorporated into the Hage area. 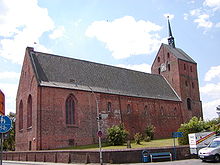 The council of the municipality of Hage consists of 18 councilors and councilors. This is the specified number for the member municipality of an integrated municipality with a population between 6001 and 7000 inhabitants. The 18 council members are elected by local elections for five years each. The current term of office began on November 1, 2016 and ends on October 31, 2021.

Erwin Sell has been the honorary mayor of Hage since May 8, 2008 . The local council re-elected him to the mayor's office for the 2016–2021 electoral term.

The St. Ansgari Church dates from around 1220. The late Gothic choir was added at the end of the 15th century. Dirk Lohman built the organ from 1776–1783 using pipe material from the 17th century.

The Hager mill from 1873/1880 is a gallery Dutch mill . At 30.20 meters to the top of the cap, it is the highest mill in East Frisia and all of Germany. Predecessors were the wooden post mill , which was built around 1597 and demolished in 1852, and the column mill from 1852/1853, which was destroyed by fire in 1872. The Hager windmill was originally built by Claas Hinrich Bruns in 1873 and was partially destroyed by lightning in 1880, but was then rebuilt and given an additional floor. In 1931/1932 a storage facility and the wheat mill were added. Wheat processing had to be stopped in the 1960s due to unprofitability. In 1965, Schelten-Peterssche Vermögensverwaltung took over the Hager windmill and its outbuildings and began renovating it in 1995. After extensive restoration, the windmill was given a new cap on August 15, 1997, and the wing cross also turned again. The wings have meanwhile been dismantled, the canopy no longer automatically turns into the wind.

The Magda-Heyken-Haus houses a local history collection about the town of Hage and the surrounding area. The house of the chronicler Magda Heyken , built in 1959, was given to the Flecken Hage as a gift in 1972 on condition that a home archive be set up here. The opening took place in 1986. Today the Magda-Heyken-Haus houses historical files, documents, photos and paintings from Hage and the surrounding area. There is also a library and a local collection here. The community director Udo Backer , who died in 1988, provided a true-to-original model of the Alt-Hage from 1872.

In 1934/1935 the Hager Tief was expanded by the North Drainage Association to improve drainage. The work was carried out in painstaking detail with simple spades.

Hage had a connection to the East Frisian Coast Railway, which ran from Emden via Norden, Dornum, Wittmund, Jever and Sande to Wilhelmshaven. On the section north - Dornum, which is run as a museum railway, from May to October on Sundays and public holidays special trains of the association MKO e. V.

Municipalities in the Aurich district