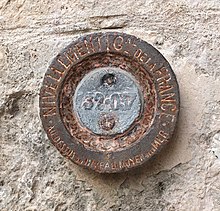 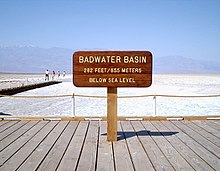 Badwater in California's Death Valley National Park is the lowest point in the United States at 85.5 meters below sea level

Heights above sea level (also sea or sea ​​level ) are used to indicate the height of geographical and technical objects , in particular of heights of the earth's surface ( terrain , mountain peaks ), of localities and traffic routes. The mean sea level is usually defined as the zero level , which can be determined from long-term observations from special water level stations or is simply determined by definition . In Germany , for example, normal height zero (previously: normal zero ) is used as a reference point .

Sea level as a reference to altitude

Can reference surfaces by means of Geodesy in millimeters to be defined exactly. Different calculation methods ( height definitions ) and different reference heights are used depending on the country or application . Some systems are only of regional significance (e.g. Heligoland Null ) or, like Wiener Null, relate to height definitions derived from river levels. In the 18th and 19th centuries, the application of certain height definitions was mostly extended to the entire national territory . Attempts are being made to standardize these definitions internationally , for example in Europe in the European Height Reference System .

The defined mean value of a coastal level or a datum point in the interior of the country was often used as the zero point for reference heights for land surveys . From here, the official height control points (HFP) distributed over the entire country are connected to a leveling system like a network and thus determined in terms of height. Important examples of such height definitions in Europe are the height of the Amsterdam level established since 1684 , the Kronstadt level (mean value for the years 1825 to 1839), the two height definitions at Molo Sartorio from the years 1875 and 1900 or the Marseille level (mean value for the years 1884 until 1896). With the determination of the zero point of the height reference system, the height information became independent of water level fluctuations of the original level . Only the word level in the name reminds of the dependence on a water level . Examples of reference points in the interior of the country are the former German normal high point in 1879 in Berlin or the Repère Pierre du Niton (on a rock in the port of Geneva ) in Switzerland .

The differences Δ between the height systems are usually a few centimeters to a few decimeters , and in extreme cases can also be meters.

A conversion between the various systems with a constant value is only possible very imprecisely (> 1 dm ), since the correction value  also depends on the position in the height network and, if the height definition is different, also on the height. The latter is particularly important in the high mountains.

2)The implementation of DHHN92 was not carried out simultaneously in the individual federal states. Reprints and scans (DTK-V) of topographic maps mostly still contain NN (old federal states) resp. HN heights (new federal states). In East Berlin, for purposes of the Reichsbahn and inland waterways, normal zero was also used in the GDR.
3)Originally 24.0000 m, but corrected after the Great Kantō earthquake in 1923 . The National Land Surveyor's Office uses this date point only for the four main islands of Hokkaidō , Honshū , Shikoku , Kyūshū and their associated islands. For Sado , Oki , Tsushima , the Izu , Ogasawara , and Ryūkyū Islands , etc., the mean water of a corresponding coast or bay is used. The date point for Miyake Island, which belongs to the Izu Islands, is the mean water of Ako Bay in the west of the island.
4)The official working heights (LN02) remain in force. With the LHN95 with orthometric heights, the height of the Repère Pierre du Niton was recorded.

The different height systems in cross-border structures are of particular importance, and errors can also occur. In 2003, for example, the calculated difference of 27 cm for the Hochrhein Bridge was taken into account in principle, but the difference was doubled to 54 cm due to a sign error.

With the United European Leveling Network (UELN) (formerly Reseau Européen Unifié de Nivellement (REUN) ), a uniform European system based on the zero point of the Amsterdam level is being created.

The Global Positioning System (GPS) is used to determine ellipsoidal heights above the reference ellipsoid of the World Geodetic System ( WGS84 ). The ellipsoidal heights in Germany are from 36 m (in Western Pomerania ) to 50 m (in the Black Forest and in the Alps ) higher than the difficult-related heights (NN, HN, NHN). Especially with GPS handheld receivers, the GPS heights are often converted directly from the receiver to heights above sea level using a geoid model . The height information in commercially available GPS leisure equipment is relatively inaccurate with deviations of 3 to 5 m under favorable conditions. Devices with a built-in barometric altimeter achieve an accuracy of about 2 m, provided that the reference pressure was previously set at a local altitude point and there are no major changes in meteorological air pressure until the measurement. A centimeter-precise height determination is possible with professional GPS devices.

The terrain elevation is in topographic maps by means of high points ( Koten ), contour lines or colored elevation levels shown. A representative point in the center is often chosen for the height of places. This is usually the market square, a point at the town hall, the train station or the church. For bodies of water, the height of the mean water level is given. Elevation points are usually found at distinctive, easily identifiable points such as B. intersections or kinks, trigonometric points or summit crosses . However, the highest or lowest points of the terrain are not always shown, for example if a trigonometric point or a summit cross is not at the highest point. The elevation system to which the heights of the map refer should be indicated on the edge of the map.

In seafaring and in nautical charts , the so-called sea ​​map zero (SKN) (also map zero) is used, which refers to the Lowest Astronomical Tide (LAT) in tidal waters or to mean water level (MW) in tide-free waters. Heights in the sea are given in relation to SKN as water depth (negative height, seaward of the line of the chart zero). Heights on the coast, i.e. in the mudflats from chart zero to the coastline , are also related to chart zero (positive height). Heights inland from the coastline, however, mostly refer to the respective reference height .

In aviation , the height above sea level is used under the English-language designation (Above) Mean Sea Level ((A) MSL), among other things, to indicate flight heights and obstacle heights. MSL is on the EGM 96 - geoid defined in the WGS 84 is used. In areas where EGM-96 does not achieve the required accuracy , regional, national or local geoid models can be used. These are then announced in the relevant aviation manual.