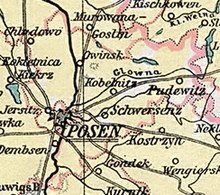 The Posen-Ost district in the Prussian province of Posen existed from 1887 to 1919. The former district is now part of the Polish Greater Poland Voivodeship .

The Prussian Posen-Ost district was formed on October 1, 1887 from the eastern half of the dissolved Posen district. The seat of the district office was the city of Poznan .

On December 27, 1918, the Wielkopolska uprising of the Polish majority against German rule began in the province of Posen , and in January 1919 the area of ​​the Posen-Ost district was under Polish control. On February 16, 1919, an armistice ended the Polish-German fighting, and on June 28, 1919, with the signing of the Versailles Treaty , the German government officially ceded the Posen-Ost district to the newly founded Poland .

Population of the municipalities with more than 400 inhabitants (1910):

The towns of Schwersenz and from 1900 Pudewitz belonged to the Posen-Ost district . The (as of 1908) 96 rural communities and 47 manor districts were combined to form police districts.