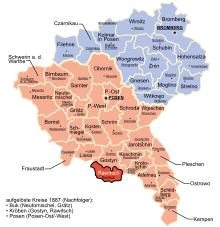 The Rawitsch district on the southern edge of the Prussian province of Posen existed from 1887 to 1920. The former district area is now part of the Polish Greater Poland Voivodeship .

Rawitsch district was also the name of a German administrative unit in occupied Poland (1939–1945) during the Second World War .

On October 1, 1887 from the southern part of the dissolved Kröben circle the circle Rawitsch formed. The town of Rawitsch became the seat of the district office and district town .

On December 27, 1918, the Wielkopolska uprising of the Polish majority against German rule began in the province of Posen , and the north-eastern part of the district was under Polish control after just a few days. The southwest around Rawitsch and Bojanowo remained German occupied.

On February 16, 1919, an armistice ended the Polish-German fighting, and on June 28, 1919, the German government officially ceded the Rawitsch district to the newly founded Poland with the signing of the Versailles Treaty . On November 25, 1919, Germany and Poland concluded an agreement on the evacuation and surrender of the areas to be ceded, which was ratified on January 10, 1920. The evacuation of the remaining area under German control including the district town Rawitsch and the handover to Poland took place between January 17 and February 4, 1920.

The Rawitsch District, together with most of the Gostyn District, belonged to the Posen 5 Reichstag constituency . The constituency was won by candidates from the Polish parliamentary group in the Reichstag elections between 1887 and 1912 :

On January 1, 1908, the five towns of Rawitsch , Bojanowo , Görchen , Jutroschin and Sarne belonged to the Gostyn district . The (as of 1908) 80 rural communities and 47 manor districts were combined to form police districts.

The municipalities of Old Chojno and New Chojno were merged to form the municipality of Chojno before 1908 . At the beginning of the 20th century, several place names were Germanized. 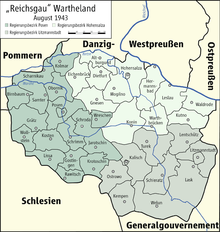 During the German occupation in World War II, the place names valid in 1918 were initially adopted by an unpublished decree of December 29, 1939, but the local occupation authorities soon made “wild” Germanizations. On May 18, 1943, all places with a post or train station were given German names, mostly phonetic adjustments, translations or free inventions.

Larger communities in the Rawitsch district: